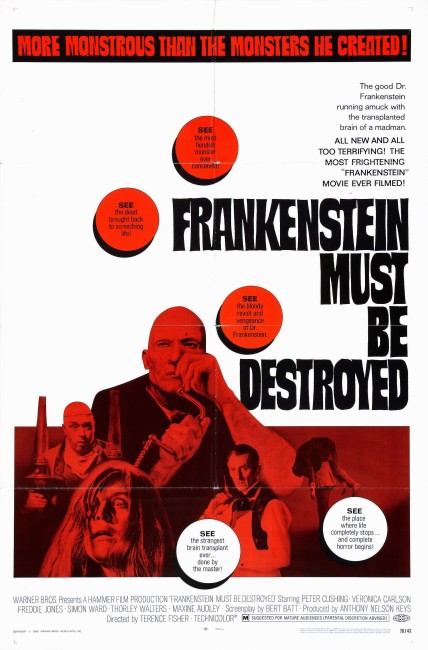 Frankenstein is forced to flee town again after his experiments are discovered. In a new town, he signs into the boarding house of Anna Spengler. When he discovers that Anna’s fiancee Karl Holst has been stealing cocaine from the asylum where he works to help his ailing mother, Frankenstein blackmails them both with threat of calling the authorities. He takes over the boarding house and has Karl steal supplies so that he can set up a laboratory in the basement. He then discovers that his old colleague Dr Brandt is incarcerated in the asylum, having been deemed mad. Frankenstein wants the secrets of how Brandt successfully conducted brain transplants and devises a scheme to break him out with Karl’s help. However, the attempt places Brandt in a coma. Frankenstein makes the decision to transplant Brandt’s brain into the body of the incompetent asylum head Professor Richter. During the process, he cures the problem that was causing Brandt’s madness. However, when Brandt comes around, Frankenstein realises that he was mad after all. Brandt then escapes, setting a trap to kill Frankenstein.

Frankenstein Must Be Destroyed was the fifth of Hammer’s Frankenstein films. (See below for the other Hammer Frankenstein titles). While Hammer’s Dracula series had started to creatively thin out by the end of the 1960s, their Frankenstein series was maintained at a much higher degree of imagination, possibly because director Terence Fisher, one of the cornerstones of the Hammer legend, directed many more entries – five of the seven Frankenstein films – in this series, as opposed to the Dracula series where he bowed out after the third entry.

Terence Fisher is a director around whom a cult has grown, championed in particular by the likes of Anglo-horror critic David Pirie. (See below for Terence Fisher’s other films). Fisher had a distinctively florid style that used the full richness of Hammer’s cinematographic and production values and there are times, particularly the climaxes of his Dracula films, where he could bring everything together with dazzling effect. Upon other occasions, Fisher could be a pedestrian director.

Frankenstein Must Be Destroyed is a brilliantly directed film, one that propels Terence Fisher from being an efficient manipulator of the Gothic into a master of mise en scene. The scene where the water main bursts, expelling Brandt’s buried body out of the garden just as the neighbour is visiting, is a sequence that would not go amiss in a Hitchcock film. The opening is a superbly edited piece – one that opens up like a Chinese box of shocks one after the other from the point-of-view of a burglar who breaks into Frankenstein’s laboratory. At first, we see just the feet of the figure coming down the cellar steps, the figure then joltingly revealed to have a bald, hideously scarred face, before this is revealed to be a mask worn by Peter Cushing, and with the burglar then accidentally tripping and knocking over a container that holds a recently severed human head. Of course, the climax with Freddie Jones taunting Peter Cushing and smashing oil lamps to set fire and block every exit from the house is superlative stuff too.

Frankenstein Must Be Destroyed is also a point where the new gore trends were making in-roads into Anglo-horror. Terence Fisher handles that too with an ease that leaves the film in a class way above the random splatter of today’s gore films. There is something that turns the stomach to the shot where Peter Cushing puts the brace-and-bit up against Freddie Jones’s head and starts drilling. Or the scene where he uses a fretsaw to cut open the skull. There is no blood shown in either scene – the effect is all conveyed from off-screen actions and some unnervingly convincing snapping and crunching effects. (On a less pleasant note, the distributor also demanded the addition of a scene where Frankenstein rapes Veronica Carlson, which exists in the American but not the British prints).

Surprisingly, Terence Fisher also indulges a sense of droll humour throughout the film – like the cut from Veronica Carlson telling Peter Cushing how he will enjoy the peace and quiet at the boarding house to a madwoman screaming at the asylum, or the boarders who sit around discussing Frankenstein’s infamous exploits unaware he is sitting in their midst. There are odd anachronisms, like having cocaine a regularly prescribed drug and the establishment of an international narcotics bureau in the midst of the 19th Century, although these hardly stand in the way of such an exceptional effort.