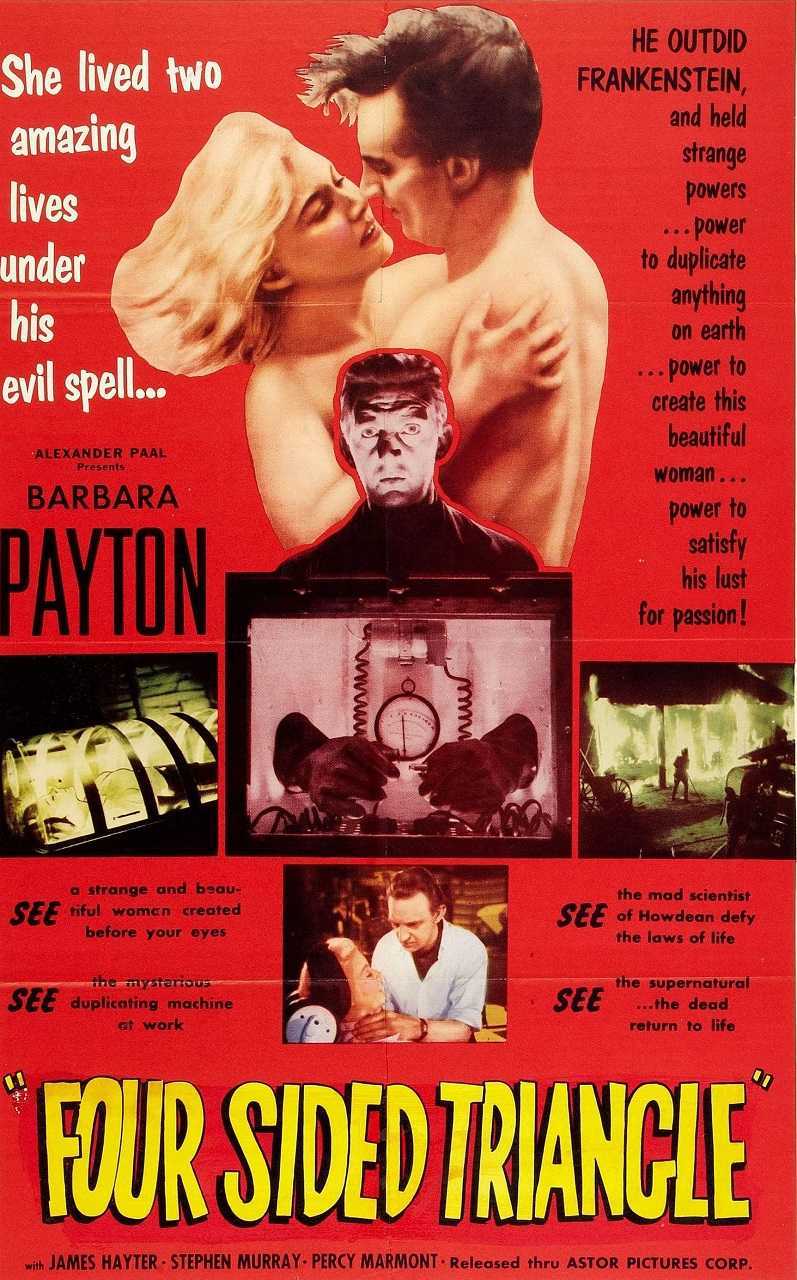 Lena Maitland, Bill Legget and Robin Grant grow up together in the sleepy English village of Howdean. Lena returns to Howdean as an adult, feeling weary of life. She feels newly invigorated after being reintroduced to Bill and Robin who are working together on a scientific project. She happily becomes an assistant to the two of them in their barn laboratory. They successfully demonstrate the finished device – one that can create an exact duplicate of any object placed in its chamber. They then set about developing this and its possibilities. However, Bill is shattered when Robin and Lena announce their engagement as he was in love with Lena too. As the two are married, he becomes obsessed with perfecting the means of using the device to replicate living objects. He then announces that he wants to create a duplicate of Lena that will love him instead of Robin.

Terence Fisher (1904-80) was the director most associated with Hammer Films. Fisher started out working as an editor in the British film industry in the 1930s. He began directing in 1948 and made his debut for Hammer with his ninth film, the non-genre thriller The Last Page (1951). Four Sided Triangle was his fourth film for them. His (and Hammer’s) big success would come a few years later with the double-slam of The Curse of Frankenstein (1957) and Dracula/The Horror of Dracula (1958), which created the massive Anglo-horror cycle of the 1960s through the 70s, made Hammer’s name into legend, Fisher into a cult director and launched the careers of Christopher Lee and Peter Cushing. (See below for Terence Fisher’s other genre films).

Four Sided Triangle was an earlier work from both Hammer and Terence Fisher – made alongside another science-fiction film Spaceways (1953) the same year. This was four years before Hammer and Fisher changed the face of the English horror film. At this point, the infusion in the bloodstream of the British film industry that Hammer wrought was not on the horizon and Four Sided Triangle was simply a British quota quickie, made cheaply, shot in black-and-white and with a largely nondescript visual style. Of course that would change with The Curse of Frankenstein, which moved into colour and the sense of florid Gothic that Fisher would subsequently discover.

Four Sided Triangle does not have very high reputation and/or is frequently overlooked by purveyors of the Anglo-horror cycle. And for reasons that it is no more than a routinely dashed off film, it features none of the Hammer stars beyond the Fisher name nor has much that lights the screen up in any interesting way. The one scene where Fisher displays the promise that made him a cult director in the two decades ahead is the one where John Van Eyssen and Barbara Payton enter a party to announce their engagement and Fisher’s camera abruptly races into closeup at Stephen Murray’s shocked reaction, belying the cheer of all around him, and of Barbara sensing this as Murray gives his polite congratulations to the happy couple.

It could also be that Terence Fisher was not that interested in science-fiction – as witness his later trilogy of films The Earth Dies Screaming (1964), Island of Terror (1966) and Night of the Big Heat (1967), which are unremarkable in comparison to his horror films – and that he seemed to prefer the period setting of the Hammer films he directed and the rich play of symbolism it allowed him. Notedly the film here is most alive when Stephen Murray descends into obsession in the laboratory and the film takes on a Gothic fervour.

In actuality, Four Sided Triangle is a film that belongs more amid the mad scientist films that were being churned out by Hollywood B-budget studios during the previous decade. There is a certain air of fascination when it comes to the construction of the device. However, this soon turns to doom and gloom as Stephen Murray goes over the edge into single-minded obsessiveness as he attempts to perfect the duplication of organic matter. The film takes place in almost caricaturedly abnormal placid English county village – it does come with the novel narrative device of this being introduced to us by James Hayter in a chatty voiceover.

Even the doppelganger theme comes without any real imagination. It should be of no particular surprise to Stephen Murray that the copy of Barbara Payton loves John Van Eyssen rather than him just as the original does. However, rather than engage in any of the fascinating identity debates and conundrums that modern cloning and doppelganger films like Elizabeth Harvest (2018) and tv’s Orphan Black (2013-7) do, the film prefers to go with its Gothic solution. As most of the mad scientist films did, the invention is destroyed and the laboratory set on fire as though extinguishing all trace of the discovery and by implication science that has gone too far will erase the dangers it presents and the placid village can return to normal.