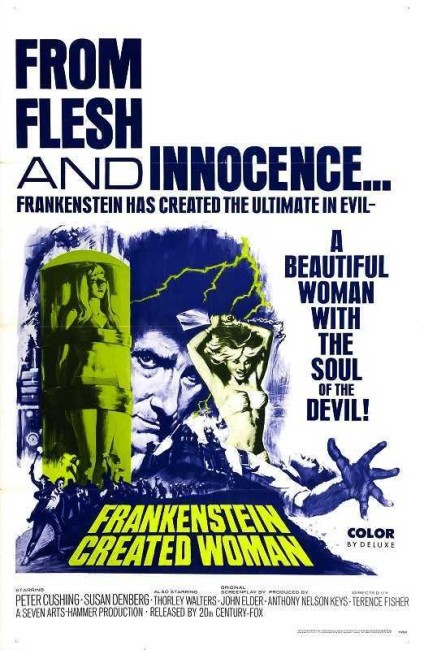 Baron Frankenstein’s lab assistant Hans is wrongly sentenced to the guillotine for the murder of an innkeeper that was in fact conducted by three drunken libertines. Frankenstein has been conducting a series of experiments that allow him to preserve the soul of a person after death. His opportunity comes when Hans’s girlfriend, the innkeeper’s disfigured daughter Christina, throws herself into the river in anguish. Frankenstein then successfully transfers Hans’s soul into Christina’s body. What he does not see is that Hans now uses Christina’s body to obtain revenge on the three youths who were responsible for the murder.

Frankenstein Created Woman is certainly the most variant and way out of Hammer’s Frankenstein films. For one, Frankenstein almost becomes a supporting character and the story is taken over for a substantial part by the characters of Hans and Christina. This is also the most conceptually wild and outrightly science-fictional of the Hammer Frankenstein films with Frankenstein engaged in experiments in cryogenics, the creation of forcefields and the capturing and transplantation of souls. The central theme is no longer about a scientist trying to reanimate the dead but of a man seeking revenge for his own murder while encased in a woman’s body.

While the symbolic resonance made Frankenstein Created Woman a fascinating film for David Pirie in A Heritage of Horror: The English Gothic Cinema 1946 – 1972 (1973), as science-fiction it seems a wild concept that the film reaches for but fails to give any satisfactory treatment to. The film spends no time dealing with the possibilities of what confusion a man must surely feel inside a woman’s body. Instead, it has Hans implausibly taking over and turning Christina’s innocence into seductivity in order to attract and kill his enemies.

All that we end up with is a conceptually stretched version of Hammer’s feminine monstrous – here Christina embodies a dualism (the aspect that excited Pirie), caught between virtue and wielding her sexuality with psychopathic regard. It is the same dialectic that runs through many of Hammer’s early films – Dracula/The Horror of Dracula (1958), The Gorgon (1964), Dracula – Prince of Darkness (1966) and The Reptile (1966) – where women are caught between being either virtuous and passive or else desirable and lethal and, as a result, need to be destroyed.

Certainly, one can see that the new sexual permissiveness that would come to substantially dominate the latter-day Hammer film creeping in here. There is the luridly entertaining title, which is inaccurate in regard to anything that actually happens in the film – Frankenstein does not create any female creation. (It left many at the time the film came out thinking that this would become Hammer’s version of Bride of Frankenstein [1935]).

There was also the famous poster and posed lobby card shot (again unrelated to anything that happens in the film) containing the wonderfully suggestive pose of Peter Cushing looking up at the camera with his hand under Susan Denberg’s top as she lies unconscious on the lab table. (Not to mention the fact that the Austrian-born Denberg had been recruited directly after appearing as a Playboy Playmate).