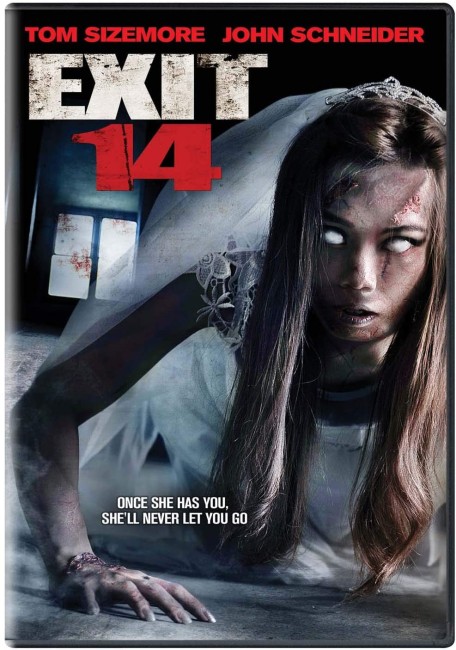 A group of four friends depart for Springbreak. After finding the road is closed and taking a detour along Exit 14, their SUV breaks down. They are offered a ride by Roy, a friendly tow truck driver who operates a convenience store they stopped at back down the road. He offers for them to come and stay at his home for the night. That night, Roy tells them the story of Desiree, a woman whose husband tried to bring her back from the dead. Getting drunk, the four kids decide to summon her spirit. The next morning, they find strange things are happening.

Exit 14 comes from Digital Media Production House, a company based in Baton Rouge that has previously specialised in making Christian and/or African-American films. They had made one previous horror film with Town of the Living Dead (2011). Director Joe Salcedo is a newcomer. The film was released directly to dvd.

Exit 14 uses familiar genre tropes – the car broken down in the midst of a backroad, the creepy gas station attendant/tow truck driver, the teens in a backwoods cabin who foolishly decide to conduct a summoning of the dead ritual while drunk. Put plainly, the film is not very well made. It has a certain basic technical competence – no more than that.

Neither Joe Salcedo nor screenwriter Camara Davis do anything interesting with any of the elements. Moreover, for much of the film, it is never particularly clear what is going on. Is it a film about psycho Tom Sizemore? – at which you have to admit that Sizemore certainly has the whole friendly/sinister down perfect. Is it a film about the summoning of the dead girl (who never seems to appear much)? Crucially, while the characters run about and get very concerned about something, very little happens.

One of the oddities of the film is that it also comes co-produced by John Schneider, the actor best known for The Dukes of Hazzard (1979-85), who also turns up for several scenes as the father of one of the four.