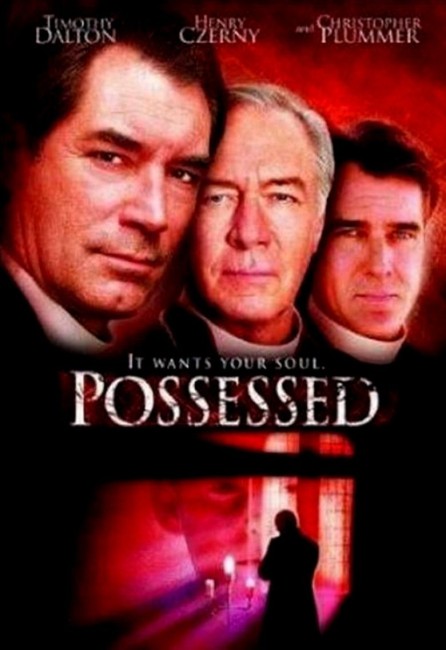 St Louis, the early 1950s. Karl and Phyllis Mannheim are disturbed by the behaviour exhibited by their 11-year-old son Robbie – his use of obscenities and particularly the manifestation of poltergeist phenomena, including a rocking bed and objects remotely thrown across the room. They eventually ask the help of Father William Bowdern, a Catholic priest at the local university. Bowdern and his colleague Father Raymond McBride determine that Robbie is demonically possessed. They approach the local archbishop about performing an exorcism and are granted permission, although the archbishop is cautious about giving his backing to a ritual the church regards as belonging in the Middle Ages and requires that the exorcism be done in total secrecy. As Bowdern researches the rituals and then begins the exorcism, the demon brings back the ghosts of his past as a chaplain during World War II to haunt him.

Possessed is based on the book Possessed: The True Story of an Exorcism (1993) by Thomas B. Allen, which purports to tell the true story of the demonic exorcism performed by the Catholic Church in 1947 that inspired William Peter Blatty to create The Exorcist (1973). (It should be added that Thomas B. Allen’s interpretations of the so-called ‘facts’ of the case have been subject to some disparagement – in particular, there is an excellent article at Strange Magazine that heavily disputes Allen’s investigation).

There is a good deal of promise to what Possessed offers – the idea of a film that pares away the B movie cliches that have grown up around The Exorcist and tells the true story behind it. Only, Possessed goes disastrously wrong. Instead of depicting a real version of exorcism, all that Steven E. de Souza produces is yet another exorcism movie that buys into the very cliches created by The Exorcist – evil brooding children, cheap pop-up effects, demons taunting the priest etc. What is worse is the film’s utter slavishness to The Exorcist – it is as though someone had brought the rights to Thomas Allen’s book solely as an excuse to make another Exorcist copy. The film replicates all the scenes from The Exorcist – the vomitings, the urination, the foul language, the bed rocking, the poltergeist activity, the deep voice, the words appearing on the chest – with an appalling lack of originality.

One senses that at least one earlier version of the script might have tried to play everything with an ambiguity that questioned whether the possession was real or not. The script offers up possible mundane explanations as to what might be happening – citing such things as the kid’s clumsiness, his love of horror comics and ventriloquism, his abusive father and the possible sexual abuse by a Baptist pastor. However, directorially Steven E. de Souza plays everything with a crudity and downright clumsiness that mitigates any such ambiguity.

In Steven E. de Souza’s staging, the sexual abuse scene is utterly laughable – the minister (Richard Waugh) putting his arm around the boy “We must remove you from the environment these things happen in … No, this house. There’s plenty of room at mine,” followed by a completely ludicrous scene where the minister tries to photograph the boy’s manifestations, only for his cameras to start malfunctioning, the minister to trip and fall on the bed and in so doing accidentally rip the boy’s clothes off and then be walked in on by the maid who thinks he is trying to have sex with the boy. One wonders what on earth Steven E. de de Souza was trying to achieve with the scene – certainly, with a little more imagination the ambiguity of the situation might have come out more subtly, but as it is the staging of the scene is completely ludicrous.

Other things that Steven E. de Souza tries to do are equally slipshod. His attempts to set an historical backdrop for the story only result in cliche images – Duck and Cover films, stock tv footage of the A-bomb and John F. and Jackie Kennedy. Or laughable scenes such as when Timothy Dalton looks at the boy’s toy soldiers and we suddenly get the sound of machine-gun fire on the soundtrack in what is supposed to be Dalton having a flashback. The exorcism itself is conducted with a fair degree of drama – it is just that the rest of Possessed collapses into the completely absurd.