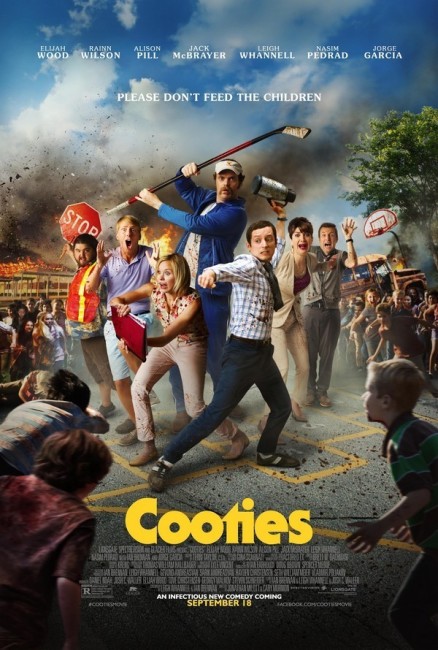 In Fort Chicken, Illinois, Clint Hadson is not doing so well in his planned career as a horror writer and has returned home to stay with his mom. He takes a job as a substitute teacher at his old school, meeting fellow teacher Lucy McCormick and realising they went to school together. One of the girls in Clint’s class abruptly turns and bites a chunk out of another student’s face. She attacks others in the playground and the infection rapidly spreads around all of the children, turning them into flesh-eating zombies. Clint and the other teachers take refuge inside the school. The same thing appears to be happening all over the city and is caused by the eating of infected chicken pieces from a local poultry farm. As the group realise, the contagion only infects those under the age of puberty. They now try to find a means to get past the children and escape the school.

Cooties was the second film for Elijah Wood’s Spectrevision production company and the first in which Wood had a starring role. (See below for the other Spectrevision films). While co-directors Jonathan Milott and Cary Murnion are making their debut, there is an interesting cluster of names on the script, including Leigh Whannell, a collaborator with James Wan on the scripts for Saw (2004), Dead Silence (2007), and Insidious (2010) and sequels who subsequently made his debut as director with Insidious Chapter 3 (2015), followed by the A.I. film Upgrade (2018) and The Invisible Man (2020); Josh C. Waller, a Spectrevision producer and director of Raze (2013) and Camino (2015), and Ian Brennan who co-created tv’s Glee (2009-15) and Scream Queens (2015-7).

Nevertheless, Cooties is one effort that stands up rather well. Its treatment of zombies themes – the initial infection, the outbreak, the characters at siege inside a building – is not any different to standard. One twist we do get is that the zombies are all school-age children and the locale is an elementary school. I am willing to bet that one or other of the scriptwriters on the film had previously worked as a teacher – the film seems devastatingly on the ball in its wicked satire of teachers and their methods, even their peccadilloes and manner of speech. It is this sharp and witty humour, the wryly penetrating observation of the various characters and puncturing of their self-pretensions that make the film. Jonathan Milott and Cary Murnion have a very snappy pace and the film hits in with a great sense of delivery and just keeps going.

Milott and Murnion do well when it comes to the siege scenes. This is not a film that goes overboard on splatter and gore, although they don’t entirely shy away from it either – there is notable macabre montage where we see the children using intestines as skipping ropes, a severed finger placed between the spokes of a bicycle wheel, removed eyeballs as marbles and so on. Mostly it is a film that seems to be having the time of its life deflating zombie movie cliches.

The greater triumph of the film is also its casting. Elijah Wood does well as the average dweeb with pretensions of being a writer, although much of the show is stolen by Raiin Wilson who has a fantastic line in tough guy bravado.

All of the supporting cast do well in the roles they have to perfectly on the ball comic ends. Scriptwriter Leigh Whannell also turns up as the teacher lacking in social graces that we first see reading a book on how to have a conversation, while his other co-writer Ian Brennan is also present as the wannabe hippie assistant principal.

Directors Jonathan Milott and Cary Murnion subsequently went on to make Bushwick (2017), which has a science-fictional scenario where a Brooklyn neighbourhood is invaded by armed militias, and Becky (2020) where a young girl defends against a home invasion.