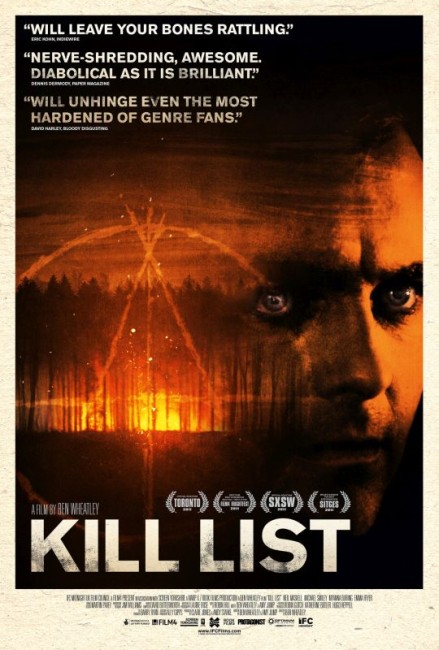 Jay is a former soldier who is now settled down and married to Shel and they have a young son Sam. They are facing stress over mounting bills, while Jay is haunted by what happened while on duty in Kiev. Jay and his best friend Gal work as hitmen. A client sends them to eliminate a list of targets. Gal is disturbed when one of the victims on the kill list turns out to be a priest. After discovering that one of their targets is a distributor of snuff pornography, Jay goes off the deep end and brutally beats the man to death. Gal becomes disturbed at Jay’s unleashed violence during the next few hits and wants out but the client refuses. When their next target turns out to be an MP who is part of a devil worship cult, they discover they have bitten off more than they are prepared for.

Kill List is a film that comes with a great deal of buzz. It propelled British director Ben Wheatley to the top of the to-watch list. Wheatley had risen to a director of British tv after a serious of popular viral videos and had previously made the film Down Terrace (2009), a similar kitchen sink crime drama centred around family tensions.

I deliberately read up as little as possible about a film before watching it – usually no more than viewing its trailer. Sometimes learning more is unavoidable, especially in running a site like this and you want to know whether it is a film you are going to want to review. For a long time into Kill List, I was never sure if I was watching a film about the domestic lives of hitmen, rather that the genre film that other reviewers were readily pitching it as.

The upshot of this is that Kill List arrives with such a buzz about its no-holds-barred brutality that when it opens amid thirty minutes of dull, kitchen sink domestic drama between Neil Maskell and MyAnna Buring over mounting bills and a dinner party that swings between arguments over the dinnertable, marital disputes over the correct dish the gravy is served up in, angry outbursts and reconciliation, couples slow-dancing and drunken tomfoolery, it seems anything except the tough and brutally bared film that you have been expecting it to be, the sharp and psychologically acute performances and dialogue in these scenes notwithstanding.

The other voice that dominates the contemporary stage of the modern British crime film comes from the larger-than-life comic-absurdist japes of Guy Ritchie. By contrast, Ben Wheatley’s approach is more akin to the work of Mike Leigh or perhaps more so Shane Meadows. For someone going to watch Kill List without any of the advance word, it would be a jolt after thirty minutes of this ordinary kitchen sink drama when the two friends suddenly reveal that the business they are going about is that of hitmen. Ben Wheatley is clearly conducting a headfuck on the audience with the film – more on this in the plot spoilers section below.

There is a knife edge of brittle tension that that runs beneath everything – the placid dinnertable scene where Neil Maskell suddenly explodes in anger and whips the tablecloth and all the plates off the table over mention of the War. [Ben Wheatley says he wanted to make the film about the tensions in British society as a result of the Iraq War. There is brief mention about something that occurred while Neil Maskell and Michael Smiley were serving in combat in Kiev but nothing is ever explained any more than that]. There is also a very funny scene where Neil Maskell confronts a group of Christians who start playing a guitar and singing songs in a restaurant. Kill List has garnered such a reputation however that you expect that all of this is going to explode into something nasty at any moment.

When Kill List does erupt into violence, it is expectedly grim. Although even then this exists more in the realm that say the violence in Reservoir Dogs (1992) does – as part of the crime drama we seem to be watching – rather than is something that necessarily pushes the film into full-on Torture Porn territory. There is a very nasty scene where Jay Maskell tortures the Librarian (Mark Kempner), breaking his hands and then bashing his head in with a hammer. There are other scenes with Maskell repeatedly smashing a victim’s head into a wall but this falls well short of the work of extremism that we have been expecting. What strikes more than anything is the headfuck that Wheatley puts on things when he has The Librarian abruptly tell Neil Maskell “He doesn’t know what you are does he? … I just want to say thank you,” and continues to thank Maskell as he is being beaten to death. It injects a bizarre left field element that leaves you suddenly wondering what on Earth is going on.

I was greatly enjoying Kill List at this point. It seemed to be building up exceptionally well as a portrait of someone dealing with barely controlled psychosis, leading towards the place where we expect Neil Maskell to explode and lose it altogether. However, four-fifths of the way in, the film takes a turn for the completely weird. It is where Ben Wheatley takes off from an ordinary and fascinating seeming crime drama about two hitmen and goes into The Wicker Man (1973) territory. Sort of where we jump from Ben Wheatley to Dennis Wheatley if you like.

[PLOT SPOILERS]. One of the targets that Neil Maskell and Michael Smiley are sent after is an MP but when they get to his estate they find him and others engaged in a devil worship ceremony in which they hang a girl. After witnessing this, Neil Maskell loses it and starts shooting at the cultists and the two of them are then pursued down into a network of tunnels. The end of the film has the cultists surrounding the home of Neil Maskell and family and coming after them.

To me, this seems to be an ending that is totally off the planet – one that you suspect is born more of not knowing how to wrap the film up than anything else. It is exactly like From Dusk Till Dawn (1996) where we are engaged in a crime drama for the first half of the film that has us sympathising with the villains as they make a getaway, only for the film to abruptly veer off into left field territory – introducing vampires there, Satanists here.

[PLOT SPOILERS CONTINUE]. Moreover, not much of this makes sense. The ending that reveals that everybody from The Client (Struan Rodger) to Michael Smiley’s wife (Emma Fryer) are part of the coven is a real head-scratcher. (It is the sort of twist ending that became a cliche in 1970s occult movies such as Rosemary’s Baby (1968), Crowhaven Farm (1970), Race with the Devil (1975) and the recent The Wicker Man (2006) remake). We earlier see Emma Fryer scratching a pentacle on the back of the bathroom mirror; the family cat is found hung; and The Client sets them up to kill a list of people, which for some reason would also appear to include members of his own coven. You are not sure to what extent the two characters’ actions are being manipulated and if so why. Has Neil Maskell been pre-selected for some purpose? The entire film seems filled with these loose and unanswered plotting ends. The Librarian tells Neil Maskell he has no idea how special he is but it is never explained what this cryptic comment means or it elaborated upon any further. For that matter, MyAnna Buring suddenly develops well-trained and highly proficient gun skills during the climactic siege indicating that she is more than the average housewife she seems to have been all along. Similarly, in looking for explanations, what are we meant to make of Ben Wheatley’s claim that the film is all a metaphor for the Iraq War – that the soldiers who went into Iraq (or maybe their post-War stress) were secretly being manipulated by a coven of Satanists?

Ben Wheatley next went onto direct the U is for Unearthed segment of The ABCs of Death (2012); Sightseers (2012), a black comedy about murderous tourists; the unfathomable non-genre historical film A Field in England (2013); the J.G. Ballard adaptation High-Rise (2015) about an apartment building that slowly collapses into barbarism and the non-genre Free Fire (2016) about a shootout in a warehouse. Wheatley has also produced Aaaaaaaah! (2015), The Ghoul (2016) and The Greasy Strangler (2016).

(Nominee for Best Actor (Neil Maskell) at this site’s Best of 2011 Awards).