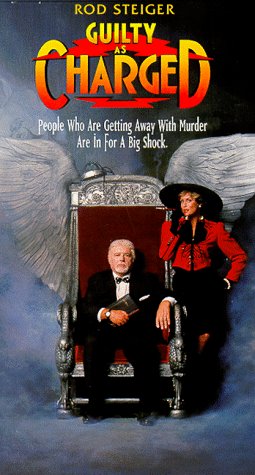 Frozen meats millionaire Ben Kallin’s wife was murdered by a man who was released from jail on parole before his full sentence was up. Believing he is conducting the work of God, Ben has set up his own private jail and electric chair. There he captures the guilty that have evaded the system and executes them while the victims of their crimes watch. Kimberly Adams begins working for Congressman Mark Stanford’s campaign for governor. In her job as a parole officer, Kimberly is puzzled by the high number of convicts who are released and then vanish, and so conducts her own investigation. Unknown to her, the corrupt Stanford shot a woman he was having an affair with who was threatening to expose him if he did not leave his wife. Stanford then allowed petty thief James Hamilton to go to jail for the murder. Hamilton now makes an escape from jail and returns to prove his innocence. At the same time, Ben sets out to capture Hamilton as his next electric chair victim. All four parties are destined to come together.

Guilty as Charged was a minor entry from the early 1990s that made some scanty film festival and theatrical screenings before being consigned to a video release and largely forgotten thereafter. It was the second directorial film from Sam Irvin who went onto make a handful of production for Charles and Albert Band – Oblivion (1994), Magic Island (1995), Oblivion 2: Backlash (1996) – and one or two other oddities like the eccentric thriller Roses Are Dead/Eyes of a Stranger (1993) and Elvira’s Haunted Hills (2001), as well as acting as producer of When Time Expires (1997), Gods and Monsters (1998), The Mating Habits of the Earthbound Human (1998), Bolt Neck/Big Monster on Campus (1999) and Ancient Evil: Scream of the Mummy (2000).

Guilty as Charged sits halfway between being a gonzo black comedy and a parody of the vigilante movie a la Death Wish (1974). However, Sam Irvin never quite sorts out the tone he wants to take and as a result Guilty as Charged emerges seeming like a frenetic farce that wants to be a black comedy but doesn’t seem to know how. There is the odd moment that works like it should – like where one man is taken away to be executed, but the power fails, leaving him half-charred and he sees this as God giving him the opportunity to repent – but most of the scenes where you think the film should have been funny only seem clumsy. Other times, Sam Irvin almost seems to want to almost play the film as a superhero movie sans cape – like the absurd image of 66 year-old Rod Steiger leaping through a second-story apartment window and being asked “Who the fuck are you?” and snarling back “I’m justice.” The film has clearly been made on a low budget. The sets have all been lit in such a way that they look very artificial – although it is hard to tell whether this is intentional or deliberate.

The film becomes entertainingly contorted in the last 20 minutes as the script winds the various parties together as Rod Steiger prepares to execute the innocent Michael Beach for the crimes that Lyman Ward’s senator did. Despite Irvin engaging us in Heather Graham’s race to save the innocent Michael Beach’s life this is all dismissed in a twist revelation [PLOT SPOILERS] that reveals that Rod Steiger knew Lyman Ward was guilty all along and set everything up to trap him. It is an ending that seems a blatant last minute cheat on our sympathies, not to mention decidedly contrived in terms of plot mechanics. All of which adds to the film’s disappointment.

Guilty as Charged is a film that wants to treat the death penalty and vigilantism as a black comedy but never finds anything to say about either – you cannot even work out whether it is for or against the death penalty. In one of the more improbable scenes, Heather Graham’s innocent is introduced to Rod Steiger’s private execution scheme and doesn’t even bat an eyelid or make the slightest comment. Imagine an average law-abiding citizen being given a guided tour of a private electric chair and execution scheme that someone has built in their basement where a natural reaction would probably be horror, outrage, disgust, perhaps even enormous enthusiasm for the idea, but hardly just calm acceptance of it as something perfectly everyday.

Certainly, Sam Irvin has managed to bring on board an interesting cast. There is the once great Rod Steiger who in the last two decades of his life spent his time throwing his career away, badly overacting in some trashy roles – see the genre likes of The Kindred (1986), American Gothic (1987), Modern Vampires (1998) and End of Days (1999) for a casual sample. There is also Heather Graham, who was snatched up immediately after her appearance in tv’s Twin Peaks (1990-1). It was still a couple of years before Graham made it big in Boogie Nights (1997) and a time when she still seemed like the essence of wholesome Girl Next Door innocence. There is also Isaac Hayes as Rod Steiger’s crazed Bible-waving assistant; Lauren Hutton who gets into her role as Lyman Ward’s embittered wife with relish; and a then unknown Mitch Pileggi from tv’s The X Files (1993-2002, 2016-8) as one of the prisoners.