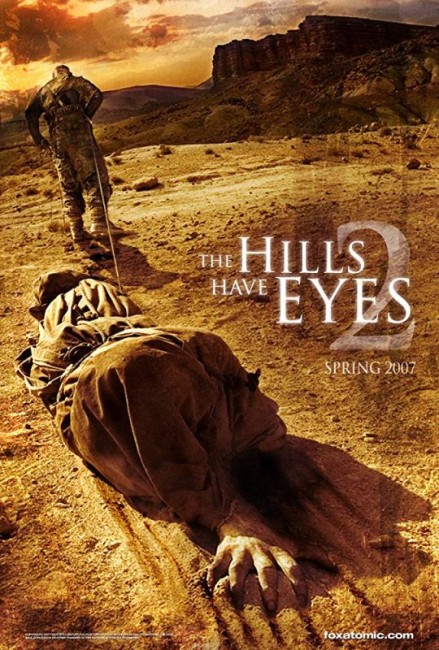 It is two years after the Carter family were brutalized in the New Mexico desert. Since then, the US military have been on a search and destroy mission in the area known as Sector 16 to root out the mutant hill people. After failing disastrously on a training exercise, a group of National Guard recruits are sent out to Sector 16 to help resupply the army telecommunications unit assigned to set up cameras in the mines. As they arrive, the group discover that the other soldiers have all slaughtered. As the recruits start investigating, the mutant hill people start picking off their numbers.

The screenplay for The Hills Have Eyes II was written by Wes Craven and his son Jonathan. (In a curious coincidence, Jonathan Craven had also previously written Mind Ripper (1995), which started out life as a second sequel to the original The Hills Have Eyes). The Cravens handed direction over to German director Martin Weisz who had previously made Rohtenburg/Grimm Love (2006) based on the true-life story of the German cannibal Armin Meiwes.

As with The Hills Have Eyes 2006, The Hills Have Eyes II has largely been premised around the delivery of a series of extremely gory set-pieces. The film opens with a scene where an imprisoned woman gives birth to a mutant child amid maximum gore and disgust. During the initial lead-up scenes, Martin Weisz manages to constantly jolt us in unsuspecting places – the ground abruptly opening up beneath one recruit as they are walking along; the completely out-there scene where a shit-covered Jay Acovone emerges from inside the bowl of a portable toilet as someone sits down to use it; where Reshad Strik is dragged down into a tiny rabbit hole at ankle height, causing his leg to bend back and snap off; a brutal scene where one of the soldiers is scaling down a cliff as a mutant appears from a hole in the cliffside and hacks off his arm, causing him to fall and splatter on the rocks below. Arguably, The Hills Have Eyes II produces the gory goods far better than its predecessor, the 2006 remake does. The climactic scenes go for broke with the survivors attacking the mutant father who is shot in the brain with a bullet, then has Jessica Stroup squeeze her fingers into the brain tissue as he shoves her against the wall, followed by a spike driven through his midriff, a sledgehammer to his crotch and a bayonet down his throat, before he is finally brought down.

The Cravens have borrowed the basic set-up of the story from Walter Hill’s classic Southern Comfort (1981), which was about a troupe of National Guard soldiers being hunted through the Louisiana bayous by Cajuns. Like Southern Comfort, The Hills Have Eyes II also winds up the pressure on the recruits by killing the commanding officer off early in the game. About all that is different here is the substitution of the Louisiana bayous for New Mexico desert (in reality Morocco). The dialogue between the various soldiers in the early scenes is snappy and well written. The scenes once we get down into the mineshafts are more standard but the show delivers all the goods that one expects of it.

Martin Weisz did not make another film again for several years until the US-made Squatters (2014).

(Winner for Best Makeup Effects at this site’s Best of 2007 Awards).