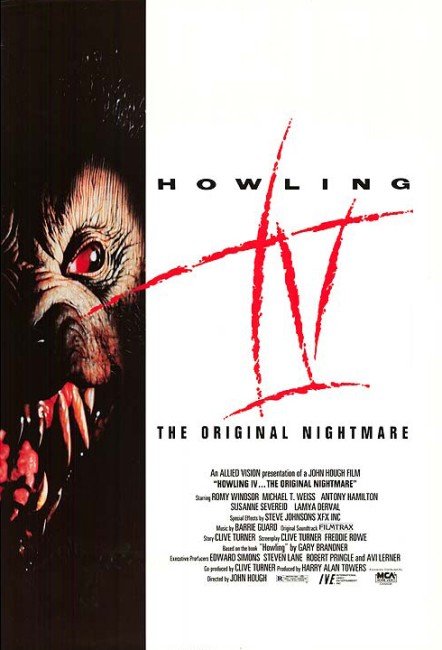 Writer Marie Adams is suffering from hallucinations. Her husband rents out a cottage in the town of Drago for her to find some peace and quiet. Once there however, the hallucinations increase as Marie discovers that all of the townspeople are werewolves.

The (so-far) seven all dreadful sequels to The Howling (1981) are symptomatic of the way that 1980s horror degenerated into a Roman numeral churning conveyor belt. British director John Hough has been brought in on this one. Hough once made Hammer’s Twins of Evil (1971) and the fine ghost story The Legend of Hell House (1973) before becoming a regular director for Disney. Into the 1980s .and by the time he made Howling IV: The Original Nightmare, .Hough’s career fell onto the B-budget skids.. (See below for John Hough’s other genre films).

The plot of Howling IV monotonously echoes the first Howling film – the remote cabin location, the seduction of the husband, the werewolf locals. (Although what should be said is that the film here is in fact a more faithful adaptation of Gary Brandner’s original novel The Howling (1977) than the first film, which largely abandoned its source, was). It becomes drearily drawn out – the tiresomely familiar business about the possibly imagined attacks is allowed to take up more than half the running time. Any drama inherent in the story quickly washes out amid the drab, utterly colourless photography.

The best things in the film are, as was always the case with the sequels, the werewolf effects. These are extremely variable, although there is an amusing melting man effect that appears to have been inserted at random and is unrelated to anything else going on in the film.

Notorious exploitation producer Harry Alan Towers defied anti-apartheid trade sanctions of the day to shoot the film on the cheap in South Africa.

John Hough’s other genre films are:- the Hammer vampire film Twins of Evil (1971); the haunted house story The Legend of Hell House (1973); the Disney films Escape to Witch Mountain (1975) and Return from Witch Mountain (1978) about psi-powered alien kids; the Disney ghost story The Watcher in the Woods (1980); Incubus (1982) about a demonic rapist; the British boy’s air hero adaptation Biggles (1986); before going way downhill with American Gothic (1987) and Bad Karma/Hell’s Gate (2002).