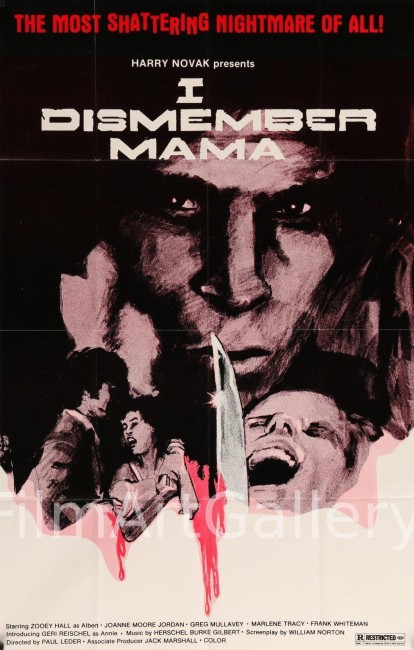 aka Poor Albert and Little Annie

Albert Robertson has been locked up in an asylum by his mother because of his psychopathic tendencies. Albert is obsessed with watching pornographic films and attacks a nurse when she tries to take them away from him. Following the attack, Dr Burton goes to Albert’s mother and insists he be placed in a high security psychiatric facility. However, Albert kills an attendant and makes an escape. As Albert calls his mother to say he is coming to kill her, the police remove her for her own safety. When Albert arrives at the house, he instead meets the live-in maid Alice and torments and kills her. Alice’s eleven-year-old daughter Annie then returns home from school. As they play together, Albert is entranced by Annie’s innocence and decides to take her away with him so they can be together.

The 1970s was an era that produced some unique psycho films. At the start of the 1960s, there had been Psycho (1960), which changed the landscape of the horror film and was followed by a host of other works that sought to imitate it. Most of the films that came in its wake were in the psycho-thriller mold featuring elaborate plots and/or psychological explanations for behaviour. By the 1970s, that had changed. The freeing up of censorship standards on screens allowed the psycho film to in effect take the restraints off and go bug-eyed, resulting in a string of frequently perverse indie films such as The Fiend (1971), The Last House on the Left (1972), The Mad Bomber (1972), The Love Butcher (1975), The Killer Inside Me (1976) and The Driller Killer (1979), among others.

I Dismember Mama is a rather sick little effort that fits in here. It was originally made in 1972 under the title Poor Albert and Little Annie, which makes it sound more like a film about two down-on-their-luck orphans. The distributor picked it up and re-released it in 1974 under the far more sensationalistic title of I Dismember Mama, a clear play on the multiply Academy Award-nominated family drama I Remember Mama (1949), which was popular in its day but is largely forgotten now. That said, the title is a cheat in that the overbearing mother – clear echoes of Psycho – is not even killed let alone dismembered.

I Dismember Mama comes with a fairly perverse kick. The opening scene alone features Zooey Hall attacking and molesting a nurse (Elaine Partnow). The most creepily perverse scene is the one where Zooey Hall forces Annie’s mother (Marlene Tracy) to strip and sing a song for him at knifepoint. In all of these scenes, Zooey Hall gets into the psycho part with the right level of intensity.

Back in the 1970s, paedophilia was not as big a scare nor as demonised as it is by society today, which is why the scenes between Zooey Hall and twelve year-old Geri Reischl play out even more creepily in watching the film today than they would have back then. The latter half of the film involves Hall playing with Geri Reischl and taking her away with him to avoid her finding out he has killed her mother, while obsessing over her as perfect in her innocence.

The whole paedophile angle is one that Paul Leder and co cannot have been aware of as witness the scenes where Zooey Hall signs into the bridal suite of a hotel with Geri and then conducts a mock marriage ceremony between the two of them. Or of the scenes with her asleep in her bed and he peeling the covers back to look at her and parading about shirtless. It leaves the whole film with a feel of something disturbingly “ugh” at its core.

I Dismember Mama was the second film of Paul Leder who went on to a long career making low-budget films. Leder’s one other film of genre note is the South Korean-shot Z-movie classic A.P.E. (1976). In genre material, he also made My Friends Need Killing (1976) about a vengeful Vietnam Vet; the psycho film Sketches of a Strangler (1978); the Old Dark House film Vultures (1983); and the psycho films The Baby Doll Murders (1993) and Killing Obsession (1994). He was also the father of Mimi Leder, Spielberg associate and director of Deep Impact (1998), among other works.

The most interesting figure on the credits was screenwriter William Norton. The son of Mormon ranchers, Norton became a Communist in the 1950s and was called up before HUAC after which he went to live in Cuba. In the 1980s, he was jailed for attempting to smuggle guns to paramilitary groups during the Troubles in Northern Ireland. He was also the father of Bill W.L. Norton, director of Gargoyles (1972) and Baby – The Secret of the Lost Legend (1985), along with assorted tv work.