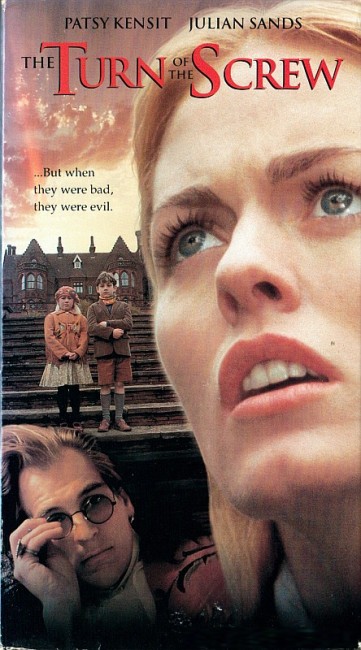 While in group therapy, a woman tells a story about ghosts. During the late 1960s, Jenny Gooding applied for a nannying job and was granted sole charge of young Miles and Flora on the large Bly country estate. Jenny soon came to find Miles’s behaviour to be disturbingly adult. She started seeing a mysterious man and a woman in black in the grounds. From her description, the housekeeper identified these as the gardener Quint and his lover, the previous nanny Miss Jessel. However, this would have been impossible as Quint and Miss Jessel were both dead. Jenny became fixated on thinking that what she was seeing were the ghosts of Quint and Miss Jessel and that they were responsible for Miles and Flora’s bad behaviour. She determined that the only way to exorcise the ghosts was to make the two children admit their existence.

Henry James’s The Turn of the Screw (1898) is a classic ghost story. It is a story where James allowed the ghosts to inhabit an ambiguous place of the mind, where we were never entirely sure by the end of the story if they were real or being imagined by the emotionally repressed Miss Giddens. The idea of the ghost/horror story that hovers in a place of uncertainty was later borrowed to great success by producer Val Lewton in the 1940s beginning with the classic Cat People (1942) and has influenced a number of other films since.

This version of The Turn of the Screw comes from director-writer Rusty Lemorande. Lemorande dabbled around Hollywood for a time in the 1980s in various roles before producing Barbra Streisand’s Yentl (1983) and then having a hand in several genre productions. These included writing and producing the computer love story Electric Dreams (1984), writing-producing Captain Eo (1986), the Francis Ford Coppola-Michael Jackson 3-D science-fiction short that was screened at Disneyland, and directing one previous effort with Cannon’s Journey to the Center of the Earth (1988), which ended up being shut down only partially shot and was later completed by an uncredited Albert Pyun with only a purported eight minutes of Lemorande’s material remaining. The Turn of the Screw is the only other film that Lemorande has directed to date.

All previous adaptations of The Turn of the Screw have retained the Victorian setting so it is a shock when Rusty Lemorande’s version places the story into midst of the Swinging Sixties. The initial scenes with Julian Sands in a pair of coloured sunglasses and smoking from a hookah pipe amid an office that contains some outre designs, including a wire-frame chair in the form of a person, contain a considerable jolt. One expects a total vulgarisation of the story but once we reach Bly estate, the film becomes a surprisingly faithful rendition of The Turn of the Screw. This is aided by the fact that the scenes at Bly estate are fairly much period surroundings, where the odd intrusion of cars and modern kitchens hardly dents the illusion.

While it does a faithful adaptation of the events of the story, Rusty Lemorande’s version of The Turn of the Screw lacks much of Henry James’s subtlety and ambiguity. Although the film faithfully retains the way that James’s story vies without commitment between a supernatural and psychological explanation of the haunting, the depiction of the apparitions is far too unsubtle. Compare The Turn of the Screw 1992 to The Innocents where the manifestations were so subtle that the audience doubted that they were real too. On the other hand, here, while Rusty Lemorande has the narrator tell us that they are not sure what is real and what not, the manifestations up there on screen seem all too tangible. Lemorande throws up too many crude and unsubtle shock effects – routine red herrings of people sneaking up on the heroine, turning into camera wearing masks and the like. At least, the best managed of these is the climax where we see Quint’s ghost floating outside the window and disappearing upon Miles’s uttering of his name.

Patsy Kensit, never a particularly good actress, is adequate in the Miss Jessel role, and the scenes where her obsession takes over are the best. Unfortunately, the performances from the children (Joseph England and Claire Szekeres) are not very good and for the story to work these needed to have been far more convincing and subtle.