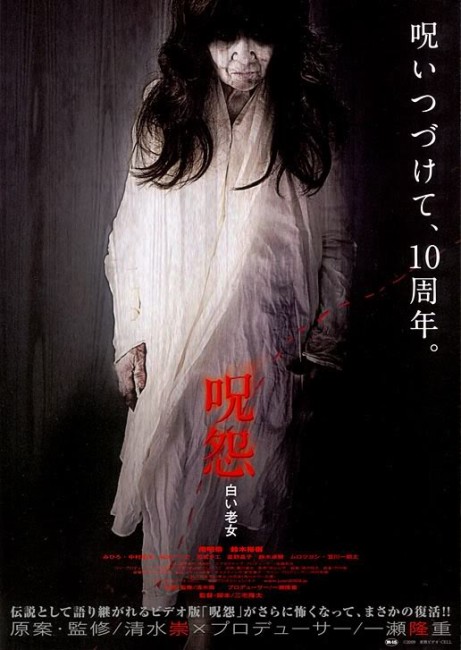 On Christmas Eve, Fumiya Hagimoto delivers a Christmas cake to the Isobe household only to discover the murdered bodies of the family, as well as their ghosts already walking about. Teenager Akane Kashigawa is spooked by the appearances of the ghosts of a young schoolgirl and an old lady carrying a basketball. These take her back to when she was a child and visited her friend Mirai Isobe where it became apparent that Mirai’s brother Junko was sexually abusing her. She was thrown out of the house and was unable to do anything as the entire family met a tragic end.

The Ju-on series has enjoyed an enormous popularity in Japan. The series first began with the tv movie School Ghost Story G (1998) where Takashi Shimizu was hired to direct two of the four segments and delivered the basics of what would become the Ju-on films in these. These were expanded by Shimizu with Ju-on (2000) and Ju-on 2 (2000), two video-released films that enjoyed a reasonable response. The success of these was enough for Shimizu to get backing for the bigger budgeted Ju-on: The Grudge (2003), which received a theatrical release and enjoyed much buzz at international film festivals. Shimizu went onto make a theatrical sequel Ju-on: The Grudge 2 (2003). By this time, the rights were obtained for an English-language remake from Sam Raimi’s Ghost House Pictures with The Grudge (2004) starring Sarah Michelle Gellar and a sequel The Grudge 2 (2006), both directed by Takashi Shimizu. There was also a subsequent third English-language film from a different director with The Grudge 3 (2009). The Grudge (2020) was a reboot of the US series.

In 2009, with the tenth anniversary of the original Ju-on shorts, two new films were commissioned to celebrate the occasion with Ju-on: Girl in Black (2009) and Ju-on: Old Lady in White here. Both films only run to an hour apiece and premiered simultaneously in Japan. Takashi Shimizu only provides the story for either, which remain independent of the events of the rest of the series, and new directors have been hired to handle either film. There was also a subsequent full-length reboot film with Ju-on: The Beginning of the End (2014), which produced a sequel with Ju-on: The Final Curse (2015), followed by Sadako vs Kayako (2016), a crossover with the Ring series, and the tv series Ju-on: The Curse (2020- ).

Of these two Ju-on spinoffs, Old Lady in White is the superior. Girl in Black was an okay film that had its occasional moments but Old Lady in White starts to approach something of the intensely uncanny effect that Takashi Shimizu’s films had. New director Ryuta Miyake creates a considerable degree of dis-ease from the opening scene when Hiroki Suzuki enters the household wearing a silly Christmas hat and is greeted by the normal seeming scene of the wife who comes out of the kitchen saying she is busy right now, which turns unsettling when she repeats the same thing two more times. As he passes through the rest of the house, he comes across increasingly disturbing scenes such as seeing a teenage girl’s beheaded body lying on her bed and the wife stabbed in the kitchen, before being abruptly jolted by the appearance of the titular old lady with her basketball.

Ryuta Miyake fills the film with all manner of spooky and uncanny jumps – a bag opened to reveal a living face inside; the appearance of a ghost boy in the backseat of the taxi. There is one particularly good scene where Aimi Nakamura is standing in front of a mirror and in a side-profile shot, a hand abruptly reaches out of the mirror and grabs him – and then after he has left the room the camera returns to the mirror where Nakamura’s reflection is still standing there. The film also adds a much stronger backstory than there was in Shimizu’s films with the element of incest being a particularly standout and effective one.