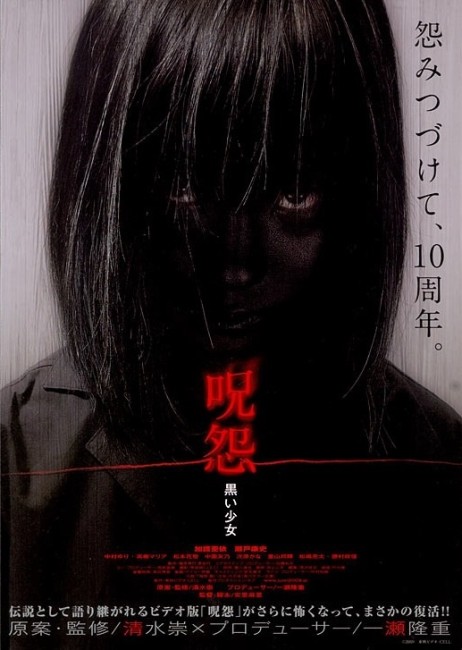 Tetsuya hears strange noises coming from the apartment of his neighbour, the nurse Yuko, and goes to investigate. At work, Yuko was concerned about the young girl Fukie who was certain that she was going to die. As Fukie’s mother Mariko uncovered, Fukie was being haunted by the soul of her twin sister who had been absorbed into Fukie’s body at birth rather than being born. The curse of the unborn twin radiates out and begins to kill all it comes in touch with.

Ju-on: Girl in Black was one of two films made in 2009 to celebrate the tenth anniversary of the Ju-on series, which originally began with the tv movie School Ghost Story G (1998). Director Takashi Shimizu expanded the basics he had created there out with the video-released films Ju-on (2000) and Ju-on 2 (2000). This was followed by the theatrically released Ju-on: The Grudge (2003), which became an international festival hit, and its sequel Ju-on: The Grudge 2 (2003). Shimizu was then employed by Sam Raimi’s Ghost House Pictures to conduct an English-language remake with The Grudge (2004) starring Sarah Michelle Gellar and a sequel The Grudge 2 (2006). There was also a third English-language film with The Grudge 3 (2009).

In 2009, two new films were commissioned to celebrate the tenth anniversary of the original films with Ju-on: Girl in Black here and Ju-on: Old Lady in White (2009). Both films run to only an hour apiece and premiered simultaneously in Japan. Takashi Shimizu only provides the story for either and two new names take up the director’s chairs. There was also a subsequent full-length reboot film with Ju-on: The Beginning of the End (2014), which produced a sequel with Ju-on: The Final Curse (2015), followed by Sadako vs Kayako (2016), a crossover with the Ring series. The Grudge (2020) was a reboot of the US series.

By the time of the Girl on Black/Old Woman in White films, the Ju-on/Grudge series is already seven films in and the plots have circled around a series of limited themes – unearthly female figures with hair covering their face making croaking sounds and creeping out of the strangest places, viral curses that claim everyone who comes in contact with the victim. Thus there is a certain ennui to it all as one sets in to watch yet another Ju-on film.

Both of these spinoff films feature a different set of haunted characters to the ghostly woman and little boy who were the centre of the other efforts. In this one, there is a new plot about a girl being taken over by the spirit of her unborn twin sister – something that leaves Girl in Black resembling the same year’s US release The Unborn (2009) with its haunting by an undead twin. The plot has been constructed with the same elliptical non-chronological structure reapproaching the story from different points in a series of chapters each focused around a different victim.

Of these two spinoff films, Old Woman in White is the better, while Girl in Black emerges as the slighter. Even though the film comes from a different director’s hands, Mari Asaro does a fair job of imitating Takashi Shimizu’s style and creates one or two decent spooky scenes. There is the scene at the hospital where nurse Ai Kago goes in to tend to sick girl Hana Matsumoto and we see, as we have before, her silhouette sitting up in bed – only for Ai to turn and see that Hana is lying asleep and that the figure on top is something else, which then starts crawling underneath the bed and coming after her. The spookiest of the scenes is where the exorcism of the twin’s spirit is conducted and in the midst of the ritual we see a face trying to push its way out of Hana Matsumoto’s stomach.