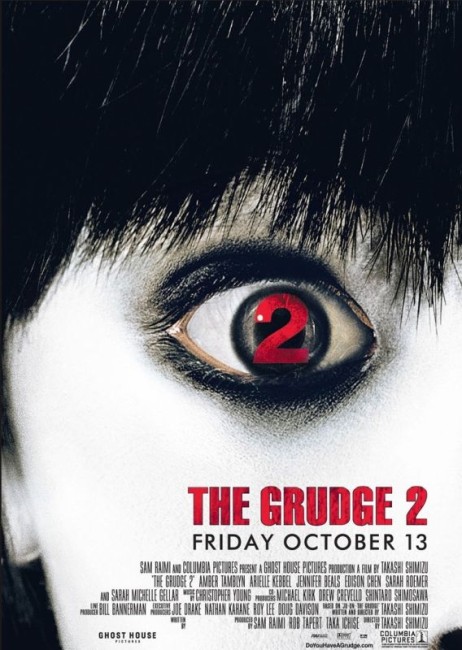 In Tokyo, shy American schoolgirl Allison is dared by two friends to visit the burned-out remains of the Saeki house. Afterwards, all three girls are haunted by the ghostly mother and son Kayako and Toshio. Around the same time, Karen Davis’s younger sister Aubrey is sent to Tokyo by their ailing mother to find what happened to Karen. Aubrey finds Karen in hospital in a terrified state. Shortly after Aubrey arrives, Karen is thrown from the hospital rooftop by Kayako. Aubrey joins forces with the journalist Eason to get to the bottom of the hauntings and find Kayako’s mother who may be able to exorcise her spirit. Back in Chicago, Trish moves in with her boyfriend Bill and his two children. The young son Jake finds mysterious things are happening in the neighbouring apartment.

There is a minor British director by the name of Vernon Sewell who is reputed to have reissued the same ghost story plot over and over again under different titles four times. However, the award for obsessive compulsive extracting of every conceivable creative drop from a single idea is surely taken by Takashi Shimizu who has milked the same spooky goings on with the ghostly mother and son for no less than eight films.

Not unexpectedly by the time of The Grudge 2, Shimizu’s bag of tricks is starting to look tired. There are only a certain number of places that the ghostly boy can appear out of and The Grudge 2 adds nothing new to what has gone before. Many scenes are copied from the other Grudge films – the little boy appearing in the shower; a sinister shape making its way up under the covers of a bed; the banging against the wall in the next apartment; the three missing schoolgirls.

Takashi Shimizu’s preferred method of storytelling in the Grudge films is elliptical, focusing on the various individual stories of people as they encounter the curse, but not always in a linear way, which frequently makes his stories hard to follow. One of the better aspects about The Grudge was Stephen Susco’s screenplay, which gave greater coherency and narrative to Shimizu’s mandala-like screenplay for the original. Susco also writes the screenplay for The Grudge 2. Although The Grudge 2 is not based on any of the Japanese films and is original material, Susco retains the non-linear structure preferred by Shimizu, choosing this time to tell three different storylines that run concurrently but, as gradually becomes apparent, not contemporaneously.

Shimizu’s American Grudge films, having been made for principally teen horror audiences, are decidedly lacking in the way-out atmosphere that their more effective Japanese counterparts have. The teen horror movie is something that Ghost House seems to want to tap with the Grudge films. Alas, a girl’s shower room scene where the most naked anyone gets is seeing Teresa Palmer in her bra and panties, or else a love scene where one girl gets under the sheets fully clothed shows how absurdly chaste this mini-genre is becoming. While the earlier Grudge films managed to evince something uncanny, The Grudge 2 feels like everything comes on autopilot. It is certainly the weakest of all the Grudge films so far. It feels like it is well and truly time for Takashi Shimizu to start finding a new song to sing.

The only returnee from The Grudge is Sarah Michelle Gellar who appears in about five minutes of the sequel before being killed off. Her principal replacement this time around is 23 year-old Amber Tamblyn, best known as the lead in tv’s Joan of Arcadia (2003-5) and a subsequent role in House M.D. (2004-12). Amber Tamblyn bears an uncanny resemblance to a younger Jeanne Tripplehorn of Basic Instinct (1992) fame, although is far too subdued a presence to carry The Grudge 2. Even less can be said for the awkward and shy Arielle Kebbel.

On the other hand, the two recognisable name performers present – Jennifer Beals and Joanna Cassidy – are written off in minor performances. Jennifer Beals always has a way of lighting up the screen with her infectious smile and puts both Amber Tamblyn and Arielle Kebbel to shame just with her presence. Especially disappointing is that Beals is given a great entrance in the opening scene – robotically serving up her boyfriend’s breakfast, enduring his accusations, before pouring the cooking fat over his head and braining him with the frying pan – yet the lead-up to these events is entirely glossed over.

Ghost House also oversaw a further sequel from an American director with The Grudge 3 (2009). The Grudge (2020) was a reboot of the US series.