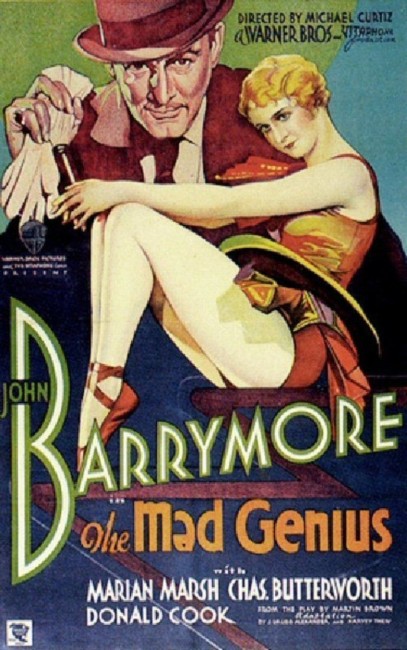 Vladimir Tsarakoff runs a touring marionette theatre. Tsarakoff grants to a young boy Fedor who hides with him, fleeing his father’s beating. Under Tsarakov’s tutelage, Fedor becomes a great ballet danseur. Tsarakoff places on him all the ambition to be a great star that his own crippled leg prevented him from obtaining. However, Tsarakoff is also incredibly controlling of Fedor, using blackmail and murder to force co-star Nana Karlova away when the two fall in love.

This fascinating artifact from the early days of the sound era was one of the first Hollywood films from Michael Curtiz, a Hungarian émigré who would go onto make classics like Captain Blood (1935), The Charge of the Light Brigade (1936), The Adventures of Robin Hood (1938), Casablanca (1942) and Mildred Pierce (1945) and the genre likes of a lost version of Alraune (1918) in his native Hungary, Doctor X (1932), Mystery of the Wax Museum (1933) and The Walking Dead (1936).

The Mad Genius is really a reworking of Trilby (1894), George du Marurier’s novel about a control freak composer who mentally controls a pupil to sing as his proxy. Trilby has been filmed numerous times – at least seven times in the silent era – where it is usually renamed after its title figure Svengali. The key version of this was Svengali (1931) starring John Barrymore and Marian Marsh. The Mad Genius has clearly been mounted in imitation of this with Barrymore and Marian Marsh essentially reprising exactly the same roles. This version involves less hypnotism and is more of a Grand Guignol melodrama. Nevertheless, it falls well within genre guidelines.

The Mad Genius is clearly a version of the Trilby/Svengali story where Michael Curtiz is channeling the spirit of The Cabinet of Dr Caligari (1919) – the lighting and stark sets have been taken from the great era of German Expressionism, while the Art Deco designs and futuristic ballet costumes could have come right out of Aelita (1924). There is one scene where John Barrymore turns to the camera and compares his ambitions to The Golem, Frankenstein and the Homunculus – clearly, this is a version of Svengali that wants to be a mad scientist film.

John Barrymore gives an overwrought performance as though in a determination to outdo Bela Lugosi – this is a role one could easily imagine suiting Lugosi far better than Barrymore. However, it is a wonderful performance that Barrymore gives – he stamps it on every frame of the film. The scene with he blackmailing the conductor into signing the termination letter by withholding his drugs is fascinatingly charged – all the more so for the wavering expression we see on the conductor’s face where he first begs to be freed and then succumbs. Or the cruelty of the scenes where he forces Nana to go with the Count and Fyodor to come back to him. It all ends on a wonderfully Grand Guignol climax.