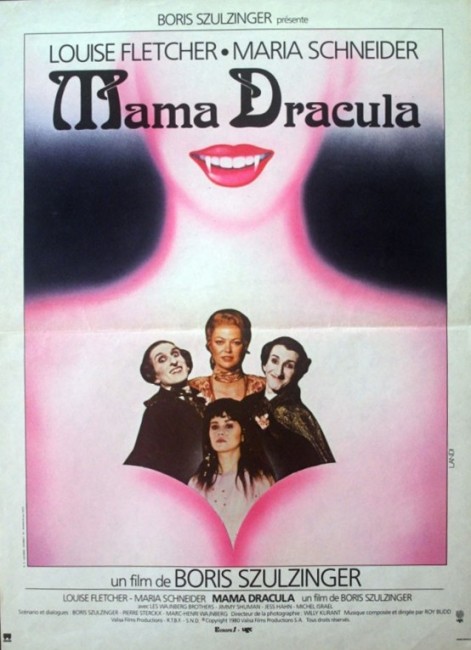 Haematologist Peter Van Bloed is brought to Transylvania by Countess Dracula who offers him a million dollars if he can come up with an artificial blood substitute. The Countess explains that her longevity is due to bathing in the blood of virgins. Her two twin sons Vladimir and Ladislas obtain virgins by abducting women from the clothing store they run. Van Bloed requires a large supply of virgins for his experiments. When the policewoman Nancy comes investigating the disappearances, the Countess has her imprisoned. After encountering Nancy, Van Bloed falls in love with her.

This Belgian-made vampire comedy came about not long after the success of Mel Brooks’s Young Frankenstein (1974). There were several other films around at the time that had the idea of doing the same sort of thing that Brooks had done in spoofing the Frankenstein film and conducting a similar send-up of the vampire film – the most notable of these being Love at First Bite (1979). Although less so than the cinematic Dracula, Mama Dracula is more of a spoof on the female vampire as incarnated in films such as Countess Dracula (1971), The Vampire Lovers (1970) and, in particular, the also Belgian-made Daughters of Darkness (1971). One might note that here the legend of Dracula and the true-life legend of Elizabeth Bathory has been peculiarly blurred together, with the film regarding both characters as one and the same.

Mama Dracula was made by Boris Szulzinger. Szulzinger had directed a couple of obscure films in Belgium – the fascinating sounding VD film Love Under Age (1969) and The Lonely Killers (1972) – but was most known for the risqué animated Tarzan spoof Tarzoon, Shame of the Jungle/Jungle Burger (1975), which ended up being sued by the Edgar Rice Burroughs estate and forced to change its title. Mama Dracula was Szulzinger’s widest released film (and the last he has made to date).

Unfortunately, Boris Szulzinger chooses to make Mama Dracula as a farce. There is nothing else to the film other than boisterous slapstick. There is not even much in the way of plot – at one point, the film jumps from one of the twins wanting Maria Schneider to her suddenly a prisoner locked up in the castle, with all the exposition in the middle as to how she got there missing as though scenes were cut or Szulzinger had not contracted Schneider long enough to shoot the extra scenes.

Chief among the film’s major annoyances are the twins Alexandre and Marc-Henri Wajnberg who play the countess’s two sons. With their beanpole figures, hatchet noses and bony features, the two cut striking figures. However, they ham the parts up, playing with a maximum degree of wild eye-rolling, all through thick accents. Quite possibly they are two of the most excruciating performers in the entire history of burlesque. Szulzinger runs almost the entire film around them – at times, Mama Dracula resembles no more than the equivalent of a modern Keystone Kops silent comedy. Szulzinger even throws up dreary old hat routines like the two twins copying everything the other does over a bathroom sink as though we were looking in a mirror.

The star of the show is Louise Fletcher. Fletcher was then a hot name as the result of her performance as Nurse Ratched in One Flew Over the Cuckoo’s Nest (1975), which won her a Best Actress Oscar. Fletcher has never given another performance that stood out like Nurse Ratched and has spent the ensuing three decades in minor supporting parts. Here she is absurdly miscast as Countess Dracula. The type of role that Louise Fletcher does well is haughty imperiousness and stern authoritarianism – she perpetually seems like a strict headmistress. This is unfortunately something at almost opposite extremes to what the role of Countess Dracula/Elizabeth Bathory entails. Compare Fletcher’s performance here to the lushly seductive presence of Delphine Seyrig in Daughters of Darkness. Fletcher struts about in a feather boa and undergoes various costume changes but projects zero in the way of oozing sex appeal.

Moreover, at age 46 and of rather broader figure, Fletcher is physically wrong for the part. Even with the film being played as the comedy it is, she never seems to get into the spirit of the show. Though second-billed, Maria Schneider, then a hot name as a result of Bernardo Bertolucci’s Last Tango in Paris (1972), only turns up in the last quarter of the film.