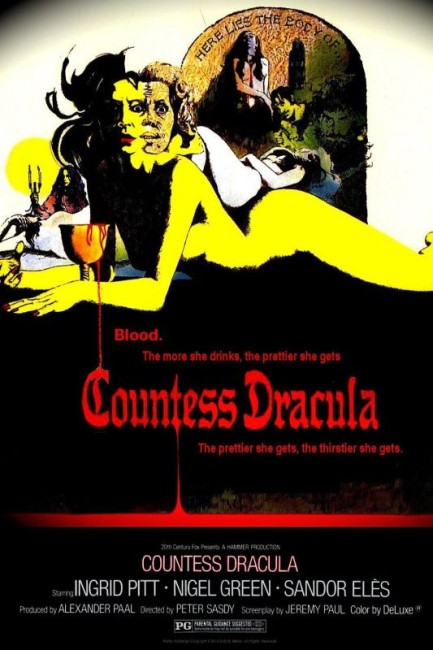 The aging Countess Nadasdy strikes an incompetent maid, causing the maid to cut herself with a knife. The maid’s blood spatters the countess’s cheek and when she wipes it away she discovers that the skin beneath is youthful and fresh again. Killing the girl and bathing in her blood, the countess is able to regain her youth. She then sets about pursuing the handsome Imre Toth. She has her daughter Ilona kidnapped and imprisoned so that she can pose as her and marry Imre. However, The Countess’s youth is a process that needs a constant infusion of fresh blood.

Countess Dracula is a Hammer film. Despite the title, it has nothing to do with Dracula, nor is it a part of Hammer’s popular Dracula series starring Christopher Lee that began with Dracula/The Horror of Dracula (1958). In fact, Countess Dracula technically has nothing to do with vampirism. The name is only a billboard cash-in on the success of the Hammer Dracula series. What the story is based on is the real-life legend of Countess Elizabeth Bathory, a 16th Century Hungarian noblewoman who bathed in the blood of virgins to preserve her youth and whose legend is frequently cited as the historical basis for vampirism. There is no record of whether Countess Bathory was successful in regaining her youth or not but this does not seem to particularly concern Hammer.

Countess Dracula features what at the time seemed to be two rising new talents in the second Hammer wave – director Peter Sasdy who had gained some favourable attention with the previous year’s Taste the Blood of Dracula (1970) and Ingrid Pitt who had played Carmilla in the previous year’s The Vampire Lovers (1970). However, such an interesting historical subject as Countess Bathory makes for a disappointing film given the Hammer treatment. While fair attention is paid to background detail, the film is perfunctorily plotted and directed. Peter Sadsy indulges to somewhat of an excess the sex and blood that came to supplant the florid stylism of directors like Terence Fisher and Freddie Francis toward the latter end of the Anglo-horror cycle. Ingrid Pitt was never a particularly good actress and the old age makeup she wears sits like pastry. Nigel Green lends customarily reliable support as the Countess’s man-at-arms.

Other films dealing with Countess Bathory are:– Daughters of Darkness (1971) where she turns up in a present-day Belgian hotel played by Delphine Seyrig; in various of Paul Naschy’s Waldemar Daninsky films with The Werewolf vs the Vampire Woman (1971), Return of the Werewolf (1973) and Night of the Werewolf (1981); the Spanish The Legend of Blood Castle/The Bloody Countess/The Female Butcher (1973) played by Lucia Bose; played by Paloma Picasso in an episode of the erotic anthology Immoral Tales (1974); played by Diane Witter in the obscure Bathory (2000); played by Caroline Néron in the present-day Canadian erotic thriller Eternal (2004); in the present-day played by Michelle Bauer in Fred Olen Ray’s Tomb of the Werewolf (2004); in the cheap Night Fangs (2005); with modern-day girls travelling back in time in Demon’s Claw (2006); in the present-day Dracula’s Curse (2006); in the present-day in the animated Hellboy: Blood and Iron (2007); in the dreadful Hungarian-shot Metamorphosis (2007); in the softcore Blood Countess (2008); mixed up with the Dracula story in Blood Scarab (2008); as a present-day abstinence campaigner (Louise Griffiths) in Chastity Bites (2013); as the female Jerry Dandridge (Jaime Murray) in Fright Night 2 (2013); in Lady of Csejte (2015) played by Svetlana Khodchenkova; even in the midst of a videogame in Stay Alive (2006) and as the host of a horror anthology in Countess Bathoria’s Graveyard Picture Show (2007), while Eli Roth homages her activities in Hostel Part II (2007). There were two attempts to set the historical record straight with Bathory (2008) starring Anna Friel and The Countess (2009), directed by and starring Julie Delpy.

Peter Sasdy’s other genre outings were:– Taste the Blood of Dracula (1970), Hands of the Ripper (1971) about Jack the Ripper’s daughter, the ecological horror film Doomwatch (1972), the immortality syndicate film Nothing But the Night (1972), the Nigel Kneale ghost story tv play The Stone Tape (1972), the Satanic impregnation film The Devil Within Her/I Don’t Want to Be Born/The Monster (1975) and the proto-Virtual Reality film Welcome to Blood City (1977).