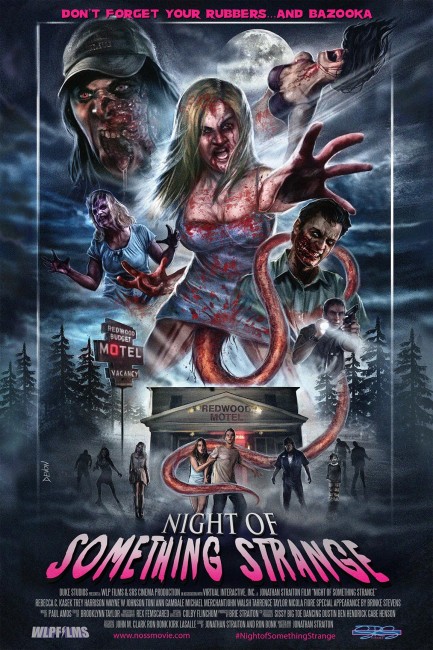 In rural Virginia, the janitor Cornelius sneaks into the morgue to have sex with an attractive corpse, unaware that it has suffered radiation exposure. Contaminated, he stumbles home and starts to become zombie-like, infecting his wife during sex. Meanwhile, a group of five school friends head away for a weekend partying and sign into a motel. There the thwarted desires, bullyings and dislikes among the group come to the fore. Meanwhile, those who become infected by the zombie STD attack and infect members of the group, turning them into zombies that only want to have sex with their victims.

Night of Something Strange was the third film of Jonathan Straiton, his first horror film. Straiton co-writes with director Ron Bonk. Indeed, Straiton acts as a regular producer for Bonk who runs SRS Cinema and has made films such as The Vicious Sweet (1997), Strawberry Estates (2001), Clay (2007), Ms. Cannibal Holocaust (2012) and Empire State of the Dead (2016). Night of Something Strange has been called a sequel to Bonk’s trash masterpiece She Kills (2016), although acts more as an overlap in that Trey Harrison plays the character of Dirk in both films and both films share a motel setting and one or two cast members.

Night of Something Strange is a zombie film – one where the zombies have been combined with STD (quite how the virus spreads is not too well explained). Mostly it is a work where Jonathan Straiton does his own thing. Indeed, Night of Something Strange feels like it is a film made by a bunch of horny, drunken adolescents trying to out-gross each other after an all-weekend beer party. The film has a sharp sarcasm and Straiton is determined to offend from the outset – be it the opening necrophilia scene, scenes of zombies eating used tampons or where Michael Merchant farts on a sleeping Tarrance Taylor’s face and accidentally craps all over it.

The film’s one gag – its desire to offend – soon starts to tire. None of the characters seem particularly likeable. That said, once the film gets past the midway point, some of the gags start to amuse. Like when horny Michael Merchant returns to Tori-Ann Gamble’s room, climbs into bed in the dark with her and has sex and then wakes in the morning, only to find out that it is bullied fat kid John Walsh in the bed. This is followed by some rather funny scenes with the zombified Walsh getting up and Merchant being dragged along because his dick is stuck in Walsh’s ass and Walsh desperately trying to extricate himself as the zombified Walsh heads out the door, not wanting the others to see him with a guy.