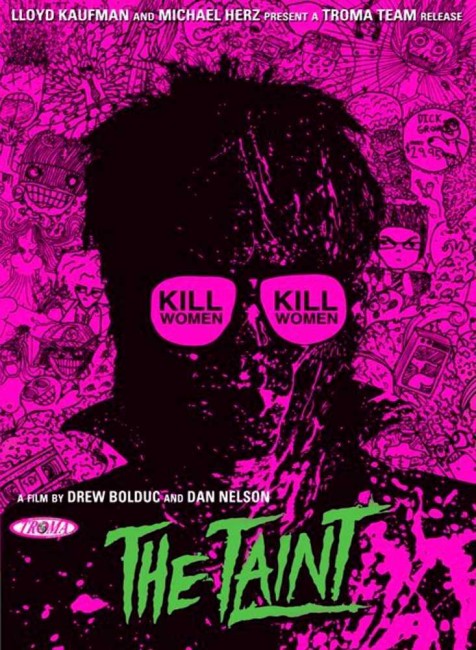 Teenager Phil O’Ginny flees as men everywhere go on killing rampages. Saved from one attack by a girl Misandra, Phil learns how the drinking water has become infected, causing all men to become crazed misogynists. Phil and Misandra continue on together. They are attacked by Phil’s sports coach and the school sports team but are saved by the masked Ludas. Ludas explains how he and an associate were conducting research to perfect the drug Cockzantium, which would allow men to grow giant-sized penises and become more attractive to women. However, an unforeseen side effect of the drug turned those who took Cockzantium into crazed misogynists. After taking the drug, their corporate backer then introduced it into the water supply, causing men everywhere to go crazy.

The Taint is an amusing low-budget film from Drew Bolduc and Dan G. Nelson, two filmmakers from Richmond, Virginia. Bolduc and Nelson were graduates of the Virginia Commonwealth University who met at a party and discovered a mutual interest in filmmaking. Handling most of the tasks between the two of them, including Drew Bolduc playing two roles in the film, they released The Taint to low-budget film festivals and sell copies through their website Taintmovie. The film was later picked up for distribution by Troma.

From the moment The Taint opens, Bolduc and Nelson determine to pile on gross-out absurdity. Drew Bolduc, who wears a schoolboy’s uniform and an extremely unconvincing blonde wig throughout, is making out with a girl when he is attacked by a zombified farmer wielding a scythe. Here the amusingly tongue-in-cheek – Bolduc casually pulling a massive handgun out of his schoolbag and stopping in mid-pursuit to light a cigarette or the farmer’s rampage being tripped up when the scythe catches on a tree – vies with the gross-out – Bolduc vomiting multiple times, a zombiefied man with a dick that is spurting as he runs, the scythe-wielding farmer crapping a turd out of his longjohns as he stumbles along. Then comes the introduction of Colleen Walsh as she saves Drew Bolduc from attack and his immediate question being the immortal line: “Who was that large-cocked man?”

Drew Bolduc and Dan G. Nelson appear to have taken the tongue-in-cheek gross-out/splatter films of Troma as their inspiration. The Taint is enthusiastically bloody in the way that only low-budget ingenue efforts such as this tend to be. The film ventures into some areas of highly questionable taste at times. There are constant shots of zombified guys running around with oversized dicks hanging out of their pants, at one point spraying a girl’s face with masses of spunk. We are even granted inside-the-vagina shots of a dick pounding during intercourse.

There are several highly dubious jokes about gang rape and a number of gay jokes – the corporate exec comes out with lines such as “I just want to make sure you guys aren’t faggots,” while Drew Bolduc’s scientist complains that his writing instrument “is a gay pen.” Bolduc and Nelson even stage a commercial for Cockzantium featuring Nazis torturing men with small penises: “Don’t be a faggot. Get cock!” All of this seems premised on the Troma idea that if you throw enough bad taste crap out in a film that a certain sector of the audience is going to find it uproarious. The Taint does stagger a line between the vulgarly offensive but comes with a sufficiently gonzo wit to win the day most of the time.

There is no particular plot to The Taint – it seems to wander all over the place between present-day scenes and flashbacks each time we meet a new character. There are times that the film hits the nail perfectly on the head with its wackily tongue-in-cheek approach. Like the flashbacks to Colleen Walsh’s marriage with her and her husband drinking a toast “To love. Fuck anybody’s who’s not in love like we are. They must be queers,” and subsequent scenes of her as a ranger blowing the heads off squirrels or decapitating them with a bullwhip. In its better moments and with some of its deadpan dialogue, The Taint suggests a collision between one of Larry Blamire’s films – The Lost Skeleton of Cadavra (2001), Trail of the Screaming Forehead (2007) – and Troma in their heyday.