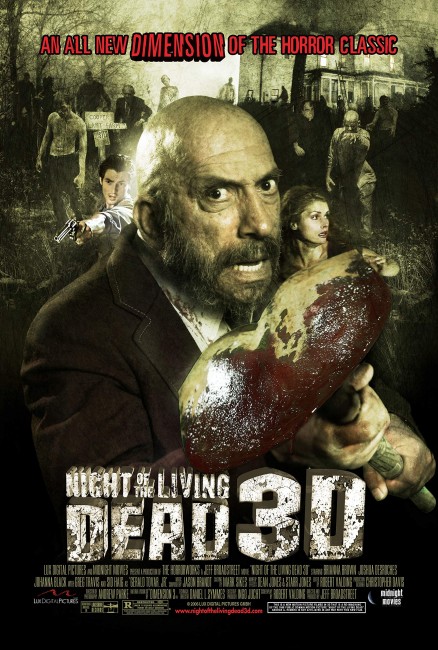 Barb and her brother Johnny have driven out of the city to attend an aunt’s funeral. They arrive to find the graveside abandoned, only for Johnny to then be attacked by stumbling figures. Barb flees to a nearby mortuary run by Gerald Tovar where she realises that the attacking figures are the revived dead. She is saved from further attack by Ben and they take refuge at the farmhouse of the marijuana farmer Henry Cooper. The others have difficulty believing Barb’s story until the dead surround the farmhouse, determined to break in and devour the flesh of the living.

Night of the Living Dead 3D feels entirely pointless. The sole addition it offers is the novelty of 3D. It should be noted that the film was made before the major 3D revival fad that came with James Cameron’s Avatar (2009) and its subsequent near-ubiquitous employment as a gimmick by multiplex films. This would have made Night of the Living Dead 3D more of a novelty in 2006 than it would have been a few years later. The main question is what does a 3D remake serve? Surprisingly little – a few zombies lurching at you but mostly lame gimmick shots like a joint being offered out of the screen or someone puffing smoke rings at the audience.

Director Jeff Broadstreet had previously made the Scream Queen film Sexbomb (1989), the supposed documentary Area 51: The Alien Interview (1997) and the horror film Dr Rage (2005), as well as subsequently producing the documentary American Grindhouse (2010) and directing another horror film Handy Dandy (2019). Certainly, this film holds one’s attention from the first shot, which starts with the opening of the 1968 film with the car driving around a bend in black-and-white and pulls back to reveal this is a shot on a tv screen, before the credits waver out of the tv screen in 3D and the camera pans on to an identical shot of a road but in colour where we see a modern car pass by. It is a rather clever segue.

A number of changes over the original become immediately apparent such as the characters using cellphones – although it does become a little too precious where Johnny delivers his classic line “They’re coming for you, Barbara” to Brianna Brown by text message. There is also the rewriting of Harry Cooper as a marijuana farmer and Ben as a dealer who was heading to the farm to restock his supplies, which takes you back a little. The worst change is the recasting of Ben as a white guy. The casting of Duane Jones in the original was the first major role in which the part of the hero was played by a Black actor. Of all the racial under-representation in Hollywood, how can giving us a white Ben be seen as anything other than an insulting retrograde step? Moreover, Joshua DesRoches is nothing more than a standard pretty boy who lacks in anything of the hard-headedness and commanding authority that Duane Jones brought to the role.

Like the texted “they’re coming for you,” there are times that the remake is just too cutely meta-referential. It seems a little too twee to have a scene where Brianna Brown enters the living room and everyone is sitting around watching the original Night of the Living Dead on tv. This comes amid comments like “Anyone freaked out by zombie movies?” which shows just what a disparity there is between 1968 when the zombie film didn’t exist and 2006 when it is part of the cultural woodwork and the original by implication can be laughed at for its cheesiness. The most amusing line comes when Johanna Black compares the situation: “Have you ever read any of those Left Behind books?”

Once the zombies are loose, Jeff Broadstreet directs with a basic competence. Although you keep asking, if this were the film that had been made back in 1968, is there anything nightmarish to it that would have turned the film into a cult classic? One strongly doubts it. For wholly gratuitous reasons, Broadstreet has the very well stacked Kristen Michele running around topless and pursued by zombies for a good portion of the middle of the film, which seems to be taking Night of the Living Dead in far more exploitative directions than George Romero ever did.

While Night of the Living Dead 3D travels along okay for the most part, it takes a big slide downwards with the introduction of Sid Haig. Haig has been identified as a horror icon since the resurrection of his career with Rob Zombie’s House of 1000 Corpses (2003) and gives an appropriately bug-eyed performance. On the other hand, his presence takes Night of the Living Dead off in an entirely different direction to Romero. Explanations about experimental chemicals and Haig’s mortician illegally stashing bodies rather than cremating them seem trivial – it makes Night of the Living Dead look small scale when you compare it to Romero’s films that took things to an apocalyptic level. It also gives us a villain of the show whereas Romero’s films are always about ordinary humans trying to survive.

It adds nothing – well actually, the introduction of spilt chemicals in a morgue seems to take the film close to Return of the Living Dead. The one thing it does do is give an amusing rationale for the difference between fast and slow-moving zombies – the slow ones are corpses that were infected, the fast ones are the living who became bitten by the dead. The end this film reaches is utterly unmemorable and disappointingly lacking in any of the bleak bite that the original film had.

Jeff Broadstreet also made a prequel to this film with Night of the Living Dead 3D: Re-Animation (2012) featuring Andrew Divoff in Sid Haig’s role, which details how the events at the mortuary led to the rise of the zombies.