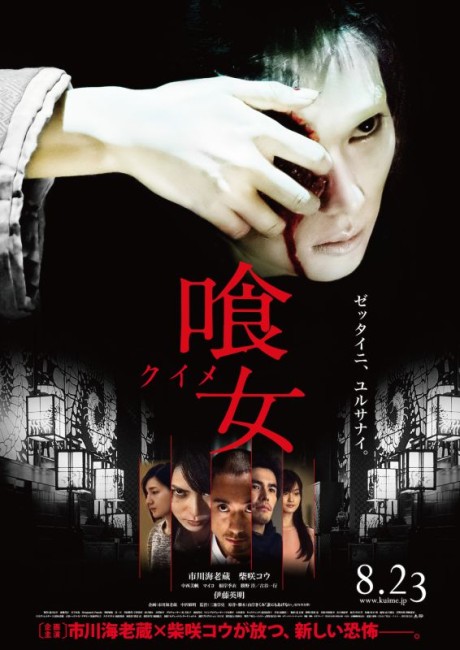 Actress Miyuki Goto is appearing in a revival of the traditional Japanese ghost story play Yotsuya Kwaidan in the role of the wife Iwa. She is having a relationship with Kosuke Hasegawa who plays the role of the husband Iemon. In the play, Iemon is a penniless samurai who kills Iwa’s father when he refuses to allow them to marry. Afterwards, he gets the offer of a job from a wealthy patron who wants Iemon to marry his daughter Ume – but to do so necessitates that he poison off Iwa. The play begins to shadow the actors’ lives in reality as Miyuki watches Kosuke becoming involved with the younger actress that pays Ume. As the roles from the play start to play out in their lives, Miyuki becomes obsessed with the affair and starts to mentally fall apart.

Japan’s Takashi Miike became a cult name for himself with films like Audition (1999), Ichi the Killer (2001) and Visitor Q (2001), which went to extremes of violence and/or pushed things way across taboo lines, along with other efforts like Dead or Alive (1999), The Happiness of the Katakuris (2001) and Gozu (2003) that were applauded for their sheer dementia. Since the 1990s, Miike has been extremely prolific, putting out 3-4 films per year, sometimes twice that, and placing his fingers into dozens of different genres. In more recent years, he has begun to veer off into a series of experiments that left everybody scratching their heads with the likes of Big Bang Love, Juvenile A (2006), Sukiyaki Django Western (2007), God’s Puzzle (2008), YatterMan (2009) and Yakuza Apocalypse (2015). (See bottom of page for a full list of Takashi Miike’s other genre films).

Takashi Miike has determined to conduct a faithful version of Yotsuya Kaidan but at the same time do something that doesn’t follow what all of the other film versions have done. To this extent, he makes the film about a group of actors and stage personnel in the present day putting on a production of the play. During the in-play scenes, Miike lets his camera follow a traditional telling in long, sombre, controlled movements, something that works very well in allowing the play to simply tell itself.

At the same time, Miike is constantly pulling back out of the play and creating an additional meta-fictional layer dealing with the lives of the principal actors. Here there is a love triangle among the actors that mirrors the roles they play – in the play, Iemon is a penniless samurai looking to rise above his station by marriage, while his real-life counterpart Kosuke is an actor looking for a big break; Kosuke is sleeping with Miyuki, an established actress who plays Iwa, the longsuffering first wife who comes from a higher social station; as his character Iemon realises that he must kill Iwa, Kosuke begins an affair with the younger actress who plays the role of the daughter of his patron that he desires to marry. Rather than have a modern day equivalent of Kosuke/Iemon killing Miyuki with poison, Miike more mundanely has her become obsessed with a possible pregnancy and start mentally collapsing over his infidelity.

Miike is less concerned with Yotsuya Kaidan as a ghost story and places the focus on the psychological drives of the characters and how these are mirrored/reflected/updated in the drama between the actors in the present. It is very easy to reach a reading of Over Your Dead Body as a film that, despite its more sensational English title, has no supernatural elements and is more of a psychological disintegration drama akin to say A Double Life (1947).

The other comparison might come to Kantemir (2015), which came out not long after, and took a far more overtly supernatural interpretation in showing a cursed play coming to life and the roles possessing the actors to replay them. Although the closest work you could point to would be The French Lieutenant’s Woman (1981), which told a period story about a woman’s abandonment but added another layer on top of that about an affair between the two principal actors appearing in the film version we are watching, using the characters/actors to reflect on the central relationship between different time periods.

Over Your Dead Body is one of Takashi Miike’s better films. Certainly, among the crazed and downright wacky offerings he has been tossing off in the last few years, it is made with an uncommon degree of control. The mood is much more subdued and sombre than we usually get from Miike. Miike keeps his hand restrained, except towards the end of the film where he lets go and peppers Yotsuya Kaidan up with an assortment of nasty facial disfigurements and severed heads.

Takashi Miike’s other genre films are:– Full Metal Yakuza (1997), a yakuza/cyborg film; the teen film Andromedia (1998) about a schoolgirl resurrected as a computer program; The Bird People in China (1998) about the discovery of a lost culture; Audition (1999); the Yakuza film Dead or Alive (1999), which comes with a totally gonzo sf ending; the surreal Dead or Alive 2 – Birds (2000); the six-hour tv mini-series MPD Psycho (2000) about a split-personalitied cop tracking a serial killer; the surreal black comedy The Happiness of the Katakuris (2001); Ichi the Killer (2001), a Yakuza film with some extreme torture scenes; the controversial taboo-defying Visitor Q (2001); the outrightly science-fictional, future-set Dead or Alive: Final (2002); the surreal Yakuza film Gozu (2003); One Missed Call (2003) about ghostly cellphone calls; the ultra-violent Izo (2004) about a cursed, immortal samurai; an episode of the horror anthology Three … Extremes (2004); the superhero film Zebraman (2004); the fairytale Demon Pond (2005); the supernatural fantasy epic The Great Yokai War (2005); Big Bang Love, Juvenile A (2006), a prison murder mystery with SF elements; the SF film God’s Puzzle (2008); YatterMan (2009), a gonzo live-action remake of a superpowered anime tv series; Zebraman 2: Attack on Zebra City (2010); Lesson of the Evil (2012) about a murderous high school teacher; As the Gods Will (2014) with high school students being slaughtered by a doll; the gonzo horror film Yakuza Apocalypse (2015); Terra Formars (2016) about giant mutated cockroaches on Mars; Blade of the Immortal (2017) about an immortal samurai; JoJo’s Bizarre Adventure: Diamond is Unbreakable – Chapter 1 (2017); and Laplace’s Witch (2018).