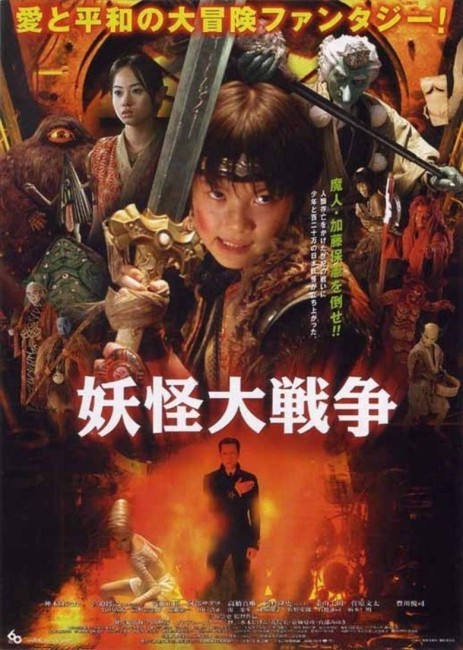 Young Tadashi goes away to stay in the country with his grandfather. During a local festival, Tadashi is chosen as the mythical figure of the Kirin Rider. Shortly after, Tadashi befriends a small cute creature Sunekosuri. Sunekosuri draws Tadashi to Great Goblin Mountain and into the world of the Yokai spirits. There the guardian spirit presents Tadashi with a sword of great power. As the Kirin Rider, Tadashi realizes that he must now face the evil Lord Kato Yasunori. Lord Kato is capturing all of the Yokai and converting them into an army of robotic minions in his foul factory. As Lord Kato sets his factory down in the midst of Tokyo as prelude to taking over the country, Tadashi and a handful of other Yokai spirits are the only ones left to stand against him.

Japan’s Takashi Miike is one of the most eccentric (not to mention prolific) directors in Asia today. Takashi Miike’s films have gained a cult following in the West, particularly his ventures into way-out violence with the likes of Audition (1999), Ichi the Killer (2001) and Visitor Q (2001). Aside from these, Takashi Miike has ventured into almost every conceivable genre – from the musical to science-fiction to documentary, the Western and the buddy road trip genre. Although, the one genre that Miike visits most frequently is the yakuza film.

The Great Yokai War was Takashi Miike’s venture into the epic fantasy genre. One gets the impression that The Great Yokai War was mounted to compete in the huge upsurge of interest in screen fantasy that came about after the success of The Lord of the Rings and The Chronicles of Narnia: The Lion, The Witch and the Wardrobe (2005). Indeed, The Great Yokai War was one of a handful of fantasy films that came out in 2005-6 featuring highly individualistic and eccentric secondary worlds. See also the likes of MirrorMask (2005), Tideland (2005), Arthur and the Invisible (2006), Pan’s Labyrinth (2006) and Re-Cycle (2006).

The fantasy worlds in each of these seemed to be the result of someone having gone crazy in the production design department. The Great Yokai War appears to have been mounted to compete with these – it has one of the biggest budgets that Takashi Miike has ever worked with. Indeed, The Great Yokai War was such a big production that Miike, someone who has been known to make at least three films a year, sometimes anything up to 5-8, made only a single film, The Great Yokai War, during 2005.

You could imagine The Great Yokai War as being a conceptual combination of Hayao Miyazaki’s My Neighbor Totoro (1988), an anime about two young children discovering a world of strange magical creatures, and maybe Clive Barker’s Nightbreed (1990) and its menagerie of willfully bizarre makeup creations. It is an opportunity for Takashi Miike and his team of mask/costume designers to go absolutely wild.

The film is overrun by eccentric creations:– the villain has a living factory that spawns an array of fearsome ratchety robotic warrior minions, especially appealing being something that looks like a big metal mouth on wheels that pursues a horde of innocent little Sunekosuri bunnies through the woods, devouring them and at one point spitting an ambulatory microwave oven out of its maw to catch them. Not to mention the villain’s constant companion Agi (played with an alarming feverish gleam by Chiaki Kuriyama), who comes all in white, including a beehive hairdo from which she periodically plucks hairs to use as whips.

There is an amazing range of Yokai creatures in the background – a tar creature with eyeballs that hang through the cage where it is imprisoned; a big red wolf-like creature that hops about on a single leg; a patchwork scarecrow; a geisha creature that has no face; a Chinese lantern with a waggling tongue; a paper door where the slats all have eyes; a creature that looks like an umbrella with one eye that hops about on its one leg; creatures with eyes in their palms; a walking wall with eyes, arms and legs.

At one point, young Ryuunosuke Kamiki finds himself trapped in a house with a woman whose head comes off and pursues him around the room on a seemingly endless neck, before coming up to lick him on the face. The heroes fly to Tokyo by riding on a creature that is a living ribbon – they hurry their journey up by jumping onto the wing of a passing plane where Miike even takes the time to warn the audience “Don’t try this at home kids.”

Miike loves nutty endings – they became the talking point of his Dead or Alive series. He comes up with an hysterical one here that involves the villain being knocked into his own furnace just as the Azuki Bean Washer (Takashi Okamura), who goes through the whole film picking up and counting his collection of beans over and over, also drops his beans into the furnace, whereupon the villain is obliterated in the mix as the soundtrack bursts into a song about how Azuki beans come from love and peace and are good for you.

For all the imagination that has gone into the conception of these creatures, Takashi Miike seems less certain when it comes to handling digital effects, which are decidedly spotty at times. Also some of the budget tends to show through and you can see that the creatures are not fully animatronic and are often stiff and awkward. The Sunekosuri creature moves about jerkily and is somewhat inexpressive. That said, the climactic Great Yokai festival with the Yokai arrayed in their thousands is amazing.

The downside of The Great Yokai War as a fantasy film is that Takashi Miike is so taken up by creating his menagerie of creatures and putting them on display that he forgets to keep his narrative moving. For example, by the one hour point of the film, Miike has barely even gotten Tadashi introduced to the world of the Yokai, let alone started off on his great epic adventure.

Takashi Miike’s other genre films are:– Full Metal Yakuza (1997), a yakuza/cyborg film; the teen film Andromedia (1998) about a schoolgirl resurrected as a computer program; The Bird People in China (1998) about the discovery of a lost culture; the torture and sadism film Audition (1999); the Yakuza film Dead or Alive (1999), which comes with a gonzo sf ending; the surreal Dead or Alive 2 – Birds (2000); the six-hour tv mini-series MPD Psycho (2000) about a split-personalitied cop tracking a serial killer; the surreal black comedy The Happiness of the Katakuris (2001); Ichi the Killer (2001), a Yakuza film with some extreme torture scenes; the controversial taboo-defying Visitor Q (2001) about a mysterious visitor; the Cyberpunk future-set Dead or Alive: Final (2002); the surreal Yakuza film Gozu (2003); One Missed Call (2003) about ghostly cellphone calls; the ultra-violent Izo (2004) about a cursed, immortal samurai; an episode of the horror anthology Three … Extremes (2004); the superhero film Zebraman (2004); the fairytale Demon Pond (2005); Big Bang Love, Juvenile A (2006), a prison murder mystery with SF elements; the SF film God’s Puzzle (2008); YatterMan (2009), a gonzo live-action remake of a superpowered anime tv series; Zebraman 2: Attack on Zebra City (2010); Lesson of the Evil (2012) about a murderous high school teacher; As the Gods Will (2014) with high school students being slaughtered by a doll; Over Your Dead Body (2014) wherein the roles in a ghost story play come to replay themselves in the lives of the actors; the gonzo horror film Yakuza Apocalypse (2015); Terra Formars (2016) about giant mutated cockroaches on Mars; Blade of the Immortal (2017) about an immortal samurai; JoJo’s Bizarre Adventure: Diamond is Unbreakable – Chapter 1 (2017); and Laplace’s Witch (2018).