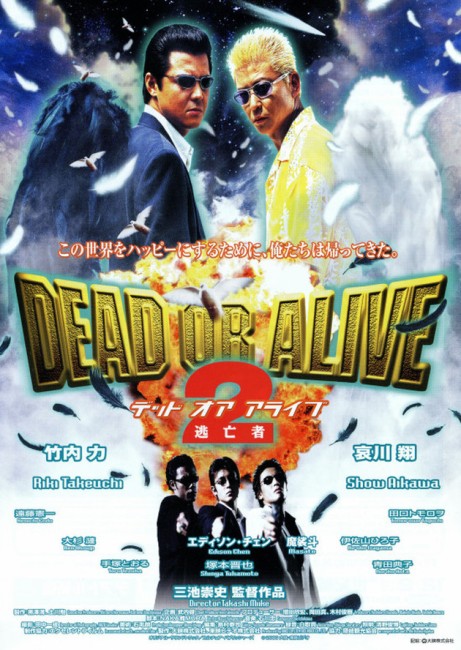 Hitman Mizuki Okamoto accepts a job to assassinate a Yakuza mobster. However, before he can do so, he only sees the hit conducted by a mysterious man in black. Mizuki claims the kill anyway and absconds with the money. He returns to the island where he grew up and waits there for the other hitman Shuichi Sawada. The two realize that they were childhood friends. There they reunite their friendship and decide to go into business together.

Dead or Alive (1999) was the beginning of the cult of Takashi Miike, subsequently known for wild, out-there films like Audition (1999), Ichi the Killer (2001) and Visitor Q (2001). Dead or Alive was a Yakuza film that astounded everybody with the dazzling editing during the opening scene, Takashi Miike’s taboo defying outrages, and most of all with the gonzo ending that was completely out of this world. Takashi Miike then made two sequels, both featuring Dead or Alive‘s two nemeses, Sho Aikawa and Riki Takeuchi, but in different roles and different unrelated plots. Dead or Alive 2: Birds was the first of these and was followed by the future-set Dead or Alive: Final (2002).

Dead or Alive was a Yakuza film with a gonzo ending. Disappointingly, Dead or Alive 2: Birds is a Yakuza film where Takashi Miike makes it all gonzo. There is not even much of a plot to it. It starts well but the middle of the film becomes far too drawn out with the scenes of Sho Aikawa and Riki Takeuchi running around a playground and the flashbacks to their childhoods. Essential bits of plot slip away – like how Riki Takeuchi got wind of the initial hit and why he decided to do it.

Dead or Alive 2: Birds is certainly far more openly surreal than Dead or Alive – the two friends habitually manifest bird wings on their backs and randomly transform back into children as they go about their hit business; there is a comet frozen in the sky above the city for some reason. No weirdness seems too much for Takashi Miike – he even throws in a little digital cut-up to show the angle of entry of multiple bullet hits in the head for one victim.

What it all means is a good guess. While Takashi Miike is following in the footsteps of the gonzo ending of the first film, Dead or Alive2: Birds seems to be only weirdness and eccentricity for its own sake. There is certainly much fun to be had in the film. Shinya Tsukamoto, better known as the director of Tetsuo – The Iron Man (1989), has a very funny cameo at the start as a weird magician hiring Sho Aikawa for a hit and demonstrating the notion of a turf war using packets of cigarettes.

Alas, Dead or Alive2; Birds lacks anything that ever approximates the wildness of the opening minutes of Dead or Alive or its gonzo ending. It is a much gentler film where Takashi Miike has even dropped all the casual shock scenes that he threw in in the background of the original. There is a sequence in the middle that intercuts Sho Aikawa and Riki Takeuchi performing in a children’s theatre with scenes of a bloody and brutal mass mob hit, but, while funny, this does not have the energy of the first film’s opening.

Ditto the ending. It is a damp squib in comparison to the zaniness of the ending in the original. Here Sho Aikawa and Riki Takeuchi seem to be shot but then appear all dressed in bloodied white suits and get aboard a ferry for the island; Sho Aikawa dies and then Riki Takeuchi carries his body up the hill while talking about going to Hell. The white predominant colour scheme suggests that this may be some type of afterlife ending, but who knows? In a film like this, it could mean anything.

Takashi Miike’s other genre films are:– Full Metal Yakuza (1997), a yakuza/cyborg film; the teen film Andromedia (1998) about a schoolgirl resurrected as a computer program; The Bird People in China (1998) about the discovery of a lost culture; the torture and sadism film Audition (1999); the six-hour tv mini-series MPD Psycho (2000) about a split-personalitied cop tracking a serial killer; the surreal black comedy The Happiness of the Katakuris (2001); Ichi the Killer (2001), a Yakuza film with some extreme torture scenes; the controversial taboo-defying Visitor Q (2001) about a mysterious visitor; the surreal Yakuza film Gozu (2003); One Missed Call (2003) about ghostly cellphone calls; the ultra-violent Izo (2004) about a cursed, immortal samurai; an episode of the horror anthology Three … Extremes (2004); the superhero film Zebraman (2004); the fairytale Demon Pond (2005); the supernatural fantasy epic The Great Yokai War (2005); Big Bang Love, Juvenile A (2006), a prison murder mystery with SF elements; the SF film God’s Puzzle (2008); YatterMan (2009), a gonzo live-action remake of a superpowered anime tv series; Zebraman 2: Attack on Zebra City (2010); Lesson of the Evil (2012) about a murderous high school teacher; As the Gods Will (2014) with high school students being slaughtered by a doll; Over Your Dead Body (2014) wherein the roles in a ghost story play come to replay themselves in the lives of the actors; the gonzo horror film Yakuza Apocalypse (2015); Terra Formars (2016) about giant mutated cockroaches on Mars; Blade of the Immortal (2017) about an immortal samurai; JoJo’s Bizarre Adventure: Diamond is Unbreakable – Chapter 1 (2017); and Laplace’s Witch (2018).