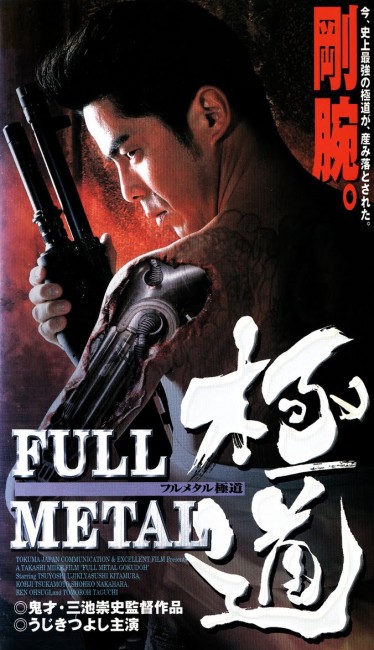 The bumbling Kensuke Hagane is a new recruit to a Yakuza family. Hagane’s boss Tosa is released from jail, only to be hit in an ambush from other members of the family. Hagane stumbles in in the midst of the hit and ends up being shot in the crossfire. Hagane comes around to find that scientist Genpaku Hiraga has placed him in a cyborg body. He has now been rebuilt with a combination of mechanical parts that make him invincible and grants superpowers. Several organs have also been taken from Tosa’s body. Ignoring Hiraga’s plans to make him into a fighting machine, Hagane flees and uses his new enhanced body to take revenge against the Yakuza clan that killed him.

In he 00s, Japanese director Takashi Miike emerged as a cult figure on the basis of wild, extraordinarily violent and perverse films such as Audition (1999), Visitor Q (2001) and Ichi the Killer (2001). With Takashi Miike’s discovery in the West, his back catalogue of films, which rarely saw release outside of Japan at the time they were made, have been resurrected and re-released. It is here that one begins to discover what an extraordinarily prolific director that Takashi Miike is – he having made some 80 films, sometimes 4-5 films a year or more. (See below for Takashi Miike’s other genre films).

Full Metal Yakuza is one of Takashi Miike’s earlier films that subsequently saw the light of day. Full Metal Yakuza is a bizarre combination of RoboCop (1987) and a Yakuza film (a genre where Takashi Miike has been amazingly prolific). Clearly, Miike is far more interested in making a Yakuza film and conducting a characteristically gory bloodbath than he is in the science-fictional elements of the story.

Unlike RoboCop, Miike appears not at all interested in the technological or sociological side of the film. This side of things is sketched in minimalist terms, not too different from a children’s cartoon superhero – the scientist played by Tomorowo Taguchi, for example, is clearly one of dubious sanity and dresses in black vinyl bodysuit more for the effect it produces than for scientific reasons. Most of the action is of the mundane sword-wielding variety, rather than anything in the way of superheroics.

It is the Yakuza genre that Takashi Miike is clearly much more at home in – indeed, Full Metal Yakuza could have been rewritten as a wholly mundane sword-wielding avenger story without too much effort. It is during these parts that Takashi Miike has the most fun. For a time, Miike toys with giving us a soul of the Yakuza or cyborg story but then heads off and allows it to turn into an entertainingly ultra-violent comic-book of a film with Tsuyoshi Ujiki’s hero wading into action waving a samurai sword and despatching villainy en masse.

While Full Metal Yakuza is not as ultra-violent as Takashi Miike’s later masterpiece Ichi the Killer, there are plenty of scenes of victims being decapitated, having arms hacked off, people being sprayed with high-pressure arterial jets from slit throats, bodies being severed at the waist, even a scene where a decapitated head is kicked halfway across the city. Nor is there much of the casual perversity that there is in later Takashi Miike films, although there is one nasty sequence where a woman is bound, ball-gagged and chained up, gang-raped, then bites her own tongue out amid much gore, only for the raping Yakuza to keep on fucking the corpse. Full Metal Yakuza is not major Takashi Miike material but is still an item that delivers on what one has come to expect of the director.

Takashi Miike’s other genre films are:– the teen film Andromedia (1998) about a schoolgirl resurrected as a computer program; The Bird People in China (1998) about the discovery of a lost culture; the torture and sadism film Audition (1999); the Yakuza film Dead or Alive (1999), which comes with a gonzo sf ending; the surreal Dead or Alive 2 – Birds (2000); the six-hour tv mini-series MPD Psycho (2000) about a split-personalitied cop tracking a serial killer; the surreal black comedy The Happiness of the Katakuris (2001); Ichi the Killer (2001), a Yakuza film with some extreme torture scenes; the controversial taboo-defying Visitor Q (2001) about a mysterious visitor; the Cyberpunk future-set Dead or Alive: Final (2002); the surreal Yakuza film Gozu (2003); One Missed Call (2003) about ghostly cellphone calls; the ultra-violent Izo (2004) about a cursed, immortal samurai; an episode of the horror anthology Three … Extremes (2004); the superhero film Zebraman (2004); the fairytale Demon Pond (2005); the supernatural fantasy epic The Great Yokai War (2005); Big Bang Love, Juvenile A (2006), a prison murder mystery with SF elements; the SF film God’s Puzzle (2008); YatterMan (2009), a gonzo live-action remake of a superpowered anime tv series; Zebraman 2: Attack on Zebra City (2010); Lesson of the Evil (2012) about a murderous high school teacher; As the Gods Will (2014) with high school students being slaughtered by a doll; Over Your Dead Body (2014) wherein the roles in a ghost story play come to replay themselves in the lives of the actors; the gonzo horror film Yakuza Apocalypse (2015); Terra Formars (2016) about giant mutated cockroaches on Mars; Blade of the Immortal (2017) about an immortal samurai; JoJo’s Bizarre Adventure: Diamond is Unbreakable – Chapter 1 (2017); and Laplace’s Witch (2018).