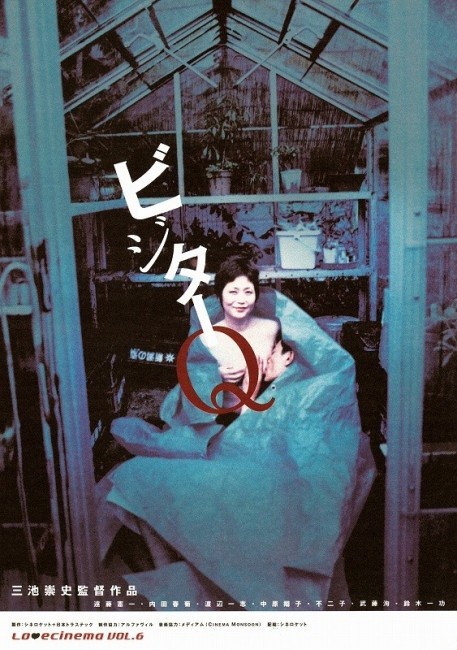 A father sets out to make a documentary about his son being bullied. At the same time, the son regularly beats the mother, who in turn has developed a heroin addiction problem. While waiting for the train, a mysterious stranger hits the father over the head with a rock. The father then brings the stranger back home. There the stranger, though saying little, has a peculiar effect on the family. The stranger causes the mother to start copiously producing breast milk, something that she finds ecstatic. Meanwhile, the father attacks his producer, who he is sleeping with, and ends up killing her. He brings her corpse home but then finds a sudden desire to engage in necrophilia.

Visitor Q is one of the essential items in the cult of Japanese director Takashi Miike. Takashi Miike is an extraordinarily prolific director with some ninety films to his name since he first appeared in the 1990s. Miike has demonstrated a unique ability to dabble in most genres – everything from supernatural horror to musicals, documentaries, fantasy, teen films, science-fiction, Westerns, superheroes, although he has proven most prolific in the Yakuza genre. The films that gained Takashi Miike his reputation were Audition (1999), Ichi the Killer (2001) and Visitor Q here, works that pushed an extreme in terms of on-screen sadism, violence and perversion, while other works such as The Happiness of the Katakuris (2001), Gozu (2003), Sukiyaki Djano Western (2007) and YatterMan (2009) gained Takashi Miike a reputation for wild surrealism and the downrightly bizarre.

Visitor Q came about when Japan’s Cinerocket financed a series of six micro-budgeted films under the Love Cinema label to demonstrate the versatility of shooting on digital video. The other films are minor efforts of no distinction – certainly, none of them attained the reputation of Visitor Q or have screened much outside of Japan. With Visitor Q however, Takashi Miike set out to offend people and produced a work that immediately became a cause celebre, not to mention was banned in several countries. Miike has definitely shot it on a miniscule budget, using handheld video camera. This leads to a somewhat flat visual style.

The film starts out framed as a series of taboo questions (although these are soon forgotten soon into the film) – “Have you ever been with your father?” “Have you ever hit your mother?” The first few scenes switch between a variety of scenarios where the father (Kenichi Endo) has sex with his daughter (Fujiko) who is working as a prostitute; where the son (Jun Muto) beats and chases the mother (Shungiku Uchida) through the house, before she goes off to her room and shoots up heroin. Later we have a scene where the father is reviewing one of his tapes where he attempts to interview a street gang and they turn on him and shove his microphone up his ass (we are spared any penetration shots, although this is one of those films where you fully expected to see everything in gratuitous detail). The mother is later revealed to be working as a prostitute and dealing with a client who wants her to flog him.

For much of the early part of the film, it is hard to work out where Visitor Q is going – or even for that matter what type of film it is. Miike gives no easy clues. It eventually becomes increasingly apparent that Visitor Q is one of Takashi Miike’s absurdist black comedies. The character of the Visitor (Kazushi Watanabe) passively walks through the madness going on around him, wielding a strange influence on the family. There is undeniable similarity to Pier Paolo Pasolini’s Teorema (1968) where a stranger (Terence Stamp) appears and seduces his way through a bourgeois household, although in Teorema the household descends into madness once the stranger departs. Perhaps a more apt comparison might be to the Dennis Potter tv movie Brimstone and Treacle (1976) and the film version Brimstone and Treacle (1982), concerning a miraculous visitor of more satanic influence.

Things become increasingly perverse when The Visitor seduces the mother and then starts playing with her nipples, causing them to lactate. This becomes increasingly more surreal to the point that he is milking her and spraying the daughter’s photograph or causing the entire kitchen floor to flood with jets of breast milk. The funniest and most outrageous scenes are where the father strangles his producer (Shoko Nakahara) by the side of the road while raping her. While we are reeling from that, he takes the dead body home and smuggles it into the glasshouse where he continues to have sex with it. Things become even more outrageous when rigor mortis sets in and his dick becomes stuck inside her, having to get the wife to put him and the corpse in the bath to soften the flesh and extricate him.

In Teorema, Pasolini was making a parable about what happens when religion touches people’s lives, whereas in Takashi Miike’s book, the presence of the Visitor becomes a perverse form of family togetherness. The film ends with the Visitor hitting the daughter over the head and then she returning home.

Takashi Miike’s other films are:– Full Metal Yakuza (1997), a yakuza/cyborg film; the teen film Andromedia (1998) about a schoolgirl resurrected as a computer program; The Bird People in China (1998) about the discovery of a lost culture; the torture and sadism film Audition (1999); the Yakuza film Dead or Alive (1999), which comes with a gonzo sf ending; the surreal Dead or Alive 2 – Birds (2000); the six-hour tv mini-series MPD Psycho (2000) about a split-personalitied cop tracking a serial killer; the surreal black comedy The Happiness of the Katakuris (2001); Ichi the Killer (2001), a Yakuza film with some extreme torture scenes; the Cyberpunk future-set Dead or Alive: Final (2002); the surreal Yakuza film Gozu (2003); One Missed Call (2003) about ghostly cellphone calls; the ultra-violent Izo (2004) about a cursed, immortal samurai; an episode of the horror anthology Three … Extremes (2004); the superhero film Zebraman (2004); the fairytale Demon Pond (2005); the supernatural fantasy epic The Great Yokai War (2005); Big Bang Love, Juvenile A (2006), a prison murder mystery with SF elements; the SF film God’s Puzzle (2008); YatterMan (2009), a gonzo live-action remake of a superpowered anime tv series; Zebraman 2: Attack on Zebra City (2010); Lesson of the Evil (2012) about a murderous high school teacher; As the Gods Will (2014) with high school students being slaughtered by a doll; Over Your Dead Body (2014) wherein the roles in a ghost story play come to replay themselves in the lives of the actors; the gonzo horror film Yakuza Apocalypse (2015); Terra Formars (2016) about giant mutated cockroaches on Mars; Blade of the Immortal (2017) about an immortal samurai; JoJo’s Bizarre Adventure: Diamond is Unbreakable – Chapter 1 (2017); and Laplace’s Witch (2018).