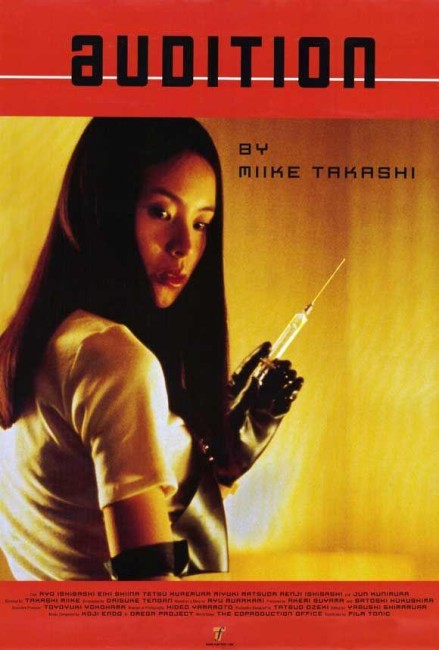 It is seven years after the death of middle-aging corporate executive Aoyama’s wife and Aoyama longs to find love again. A film producer friend suggests that they set up a fake casting audition, asking for actresses that fit the description of the type of woman that Aoyama is attracted to for a proposed film project, and that Aoyama select the one he likes. They do so and Aoyama is drawn to the shy Asami Yamazaki, touched by the pain that she describes on her application form. Despite Yoshikawa’s warnings that the names she gave as references have mysteriously disappeared, Aoyama becomes involved with her. However, as he starts to uncover the mysteries of Asami’s past, Aoyama discovers that a nightmarish fate awaits him.

I first saw Audition at the 1999 Vancouver International Film Festival where it was presented as part of a package of Japanese horror films. This was well before director Takashi Miike became a cult figure and so one entered with no expectations of what the film would be like. And it was this very association with classical kaidan eiga that makes Audition so spookily effective.

Audition starts out a quietly mannered film – slowly told, with well-drawn characters and seemingly shaping up to be a sensitive portrait of a lonely executive falling in love with a mystery girl twenty years his younger. The film quietly engages one in its emotions, especially the tenderly rendered scenes, like where Eihi Shiina shows Ryo Ishibashi her scars and allows him to make love to her.

In the casting of Eihi Shiina, who comes with a child’s body and unearthly looks, and the mystery that is suggested about her background, Audition creates the suggestion that there is something eerie, almost unworldly about her. The impression that one gets is that maybe she is a ghost – and that the film is shaping up to be a traditional Japanese ghost story. What is so effective about the film is this sense of misdirection – for what Audition eventually ends up being is the furthest thing from anything resembling a traditional love or ghost story.

The first glimpse we get that Audition is going to be something else altogether is a brief shot where we see Eihi Shiina waiting inside an apartment, which is empty except for a telephone stretching across the floor. And then, just as the phone rings, a large bag that has previously been sitting in the background abruptly rolls across the floor of its own accord. It is only a brief shot but it makes the entire audience jump and for the next few minutes, as the film returns to its tender love story, you sit wondering what on Earth just happened.

Eventually the apparent ghost story pans out into a more mundane story of psychological origins. Director Takashi Miike never spells things out for the audience – he inserts a dream sequence with images of people with severed fingers emerging from the bag and flashbacks to Eihi Shiina being tortured and cutting off her uncle’s head with piano wire, and leaves the audience to connect these up in terms of explanation for her behaviour and the clues that have been littered throughout about the missing journalist and the slaughter at the nightclub.

It is during the last fifteen minutes or so that Audition enters into the genuinely disturbing with some of the most extreme and seat-squirmingly uncomfortable scenes of torture ever placed on screen – with [SPOILER ALERT] Eihi Shiina drugging Ryo Ishabashi by injecting him straight into the tongue, torturing him with acupuncture needles applied to his pain centres and then poked under his eyeballs, and then sawing his foot off with a piece of piano wire. These scenes are as uncomfortable to sit through as anything one has seen in some time.

Moreover, the film ends with a double twist ending that leaves one unsettlingly uncertain as to whether what is happening is a dream or real. Audition is a film that, in its unexpected progression from a gentle love story to some of the most extreme sadism portrayed on screen, leaves one entirely exhausted.

Takashi Miike’s other genre films are:– Full Metal Yakuza (1997), a yakuza/cyborg film; the teen film Andromedia (1998) about a schoolgirl resurrected as a computer program; The Bird People in China (1998) about the discovery of a lost culture; the Yakuza film Dead or Alive (1999), which comes with a gonzo sf ending; the surreal Dead or Alive 2 – Birds (2000); the six-hour tv mini-series MPD Psycho (2000) about a split-personalitied cop tracking a serial killer; the surreal black comedy The Happiness of the Katakuris (2001); Ichi the Killer (2001), a Yakuza film with some extreme torture scenes; the controversial taboo-defying Visitor Q (2001) about a mysterious visitor; the Cyberpunk future-set Dead or Alive: Final (2002); the surreal Yakuza film Gozu (2003); One Missed Call (2003) about ghostly cellphone calls; the ultra-violent Izo (2004) about a cursed, immortal samurai; an episode of the horror anthology Three … Extremes (2004); the superhero film Zebraman (2004); the fairytale Demon Pond (2005); the supernatural fantasy epic The Great Yokai War (2005); Big Bang Love, Juvenile A (2006), a prison murder mystery with SF elements; the SF film God’s Puzzle (2008); YatterMan (2009), a gonzo live-action remake of a superpowered anime tv series; Zebraman 2: Attack on Zebra City (2010); Lesson of the Evil (2012) about a murderous high school teacher; As the Gods Will (2014) with high school students being slaughtered by a doll; Over Your Dead Body (2014) wherein the roles in a ghost story play come to replay themselves in the lives of the actors; the gonzo horror film Yakuza Apocalypse (2015); Terra Formars (2016) about giant mutated cockroaches on Mars; Blade of the Immortal (2017) about an immortal samurai; JoJo’s Bizarre Adventure: Diamond is Unbreakable – Chapter 1 (2017); and Laplace’s Witch (2018).