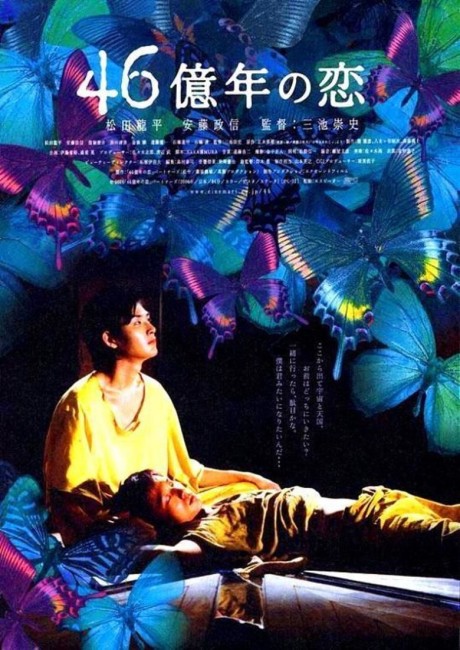 At a prison in an unspecified time and place, one prisoner Jun Ariyoshi is found kneeling over the murdered body of another prisoner Shiro Kazuki. Ariyoshi declares that he killed Kazuki but investigators suspect that this is not the case. The investigators uncovers how the men may have been lovers and accuses the warden of complicity.

Takashi Miike became a cult figure around 2001 with ultra-violent and perverse works such as Audition (1999), Ichi the Killer (2001) and Visitor Q (2001). These three films in particular gained Miike a cult name and his extraordinarily prolific body of works was promptly resurrected. Here it becomes apparent that then and since Miike has worked in almost every conceivable genre niche – from musicals, Westerns, road movies, documentaries, children’s films, samurai films, superhero films, horror, science-fiction and fantasy to his preferred genre of the yakuza film. (A full list of Takashi Miike’s other genre films is at the bottom of the page).

Burdened with the label of a cult director early in his career, Takashi Miike has had difficulty living up to it. Everything that comes after about 2001 has gone in directions that seem to leave Miike fans scratching their head. Miike seems to take up a different genre with each new film or determines to make his films as wacky and crazy as possible – see nutzoid or entirely baffling efforts like Gozu (2003), God’s Puzzle (2007), Sukiyaki Django Western (2007) and Yatterman (2009). Although the results are not unentertaining, none of these however have succeeded in hitting the same stride that his earlier work did.

Big Bang Love, Juvenile A is a major head-scratcher from this latter Miike period. It is a film where you finish watching and don’t have a clue what it is that Takashi Miike was trying to make a film about, except that he was trying to make it as unfathomably strange as possible. At first glance, Big Bang Love, Juvenile A seems to be a prison film, albeit a prison film construed as a work of arthouse theatre – involving a minimal number of sets and frequent scenes with the characters standing on a near-blank stage. For some reason, Miike also includes science-fiction elements – the prison appears to exist in a desert plane with a giant pyramid in the background and occasional shots of spaceships.

Despite the appropriation of these elements, there is no clear idea why they are there. Certainly, the film never gives you any indication it is taking place in a future setting or on another planet as you might expect with these things present. There is also a ghost that turns up in the warden’s office without any explanation and never appears or is referred to again. Nor do we get any clue how the film’s original Japanese title, which translates as ‘4.6 Billion Year Love’, pertains to the story.

The film nominally concerns an investigation into a murder at the prison, although Miike chooses to tell this in a frustratingly non-linear way. A traditional police procedural would follow the investigation and trail of clues but Miike has no concern for any of this. The film, for instance, concludes with the suspect being declared innocent but no indication given as to who the real murderer was. Miike’s other eccentricity is to never show the investigating officer but to have the camera take his place and the people interrogated answer their questions directly to the screen.

What Miike would seem to be making a film about is a gay love story but even then the two central characters and their connection are opaque. The results are dull and unfathomable in the lack of concern for any type of traditional plotting. To the contrary opinion, there are a number of viewers who find great depth and profundity to Big Bang Love, Juvenile A and regard it as a masterpiece. I cannot say I share the sentiments.

Takashi Miike’s other genre films are:– Full Metal Yakuza (1997), a yakuza/cyborg film; the teen film Andromedia (1998) about a schoolgirl resurrected as a computer program; The Bird People in China (1998) about the discovery of a lost culture; the torture and sadism film Audition (1999), the Yakuza film Dead or Alive (1999), which comes with a gonzo sf ending; the surreal Dead or Alive 2 – Birds (2000); the six-hour tv mini-series MPD Psycho (2000) about a split-personalitied cop tracking a serial killer; the surreal black comedy The Happiness of the Katakuris (2001); Ichi the Killer (2001), a Yakuza film with some extreme torture scenes; the controversial taboo-defying Visitor Q (2001) about a mysterious visitor; the Cyberpunk future-set Dead or Alive: Final (2002); the surreal Yakuza film Gozu (2003); One Missed Call (2003) about ghostly cellphone calls; the ultra-violent Izo (2004) about a cursed, immortal samurai; an episode of the horror anthology Three … Extremes (2004); the superhero film Zebraman (2004); the fairytale Demon Pond (2005); the supernatural fantasy epic The Great Yokai War (2005); the SF film God’s Puzzle (2008); YatterMan (2009), a gonzo live-action remake of a superpowered anime tv series; Zebraman 2: Attack on Zebra City (2010); Lesson of the Evil (2012) about a murderous high school teacher; As the Gods Will (2014) with high school students being slaughtered by a doll; Over Your Dead Body (2014) wherein the roles in a ghost story play come to replay themselves in the lives of the actors; the gonzo horror film Yakuza Apocalypse (2015); Terra Formars (2016) about giant mutated cockroaches on Mars; Blade of the Immortal (2017) about an immortal samurai; JoJo’s Bizarre Adventure: Diamond is Unbreakable – Chapter 1 (2017); and Laplace’s Witch (2018).