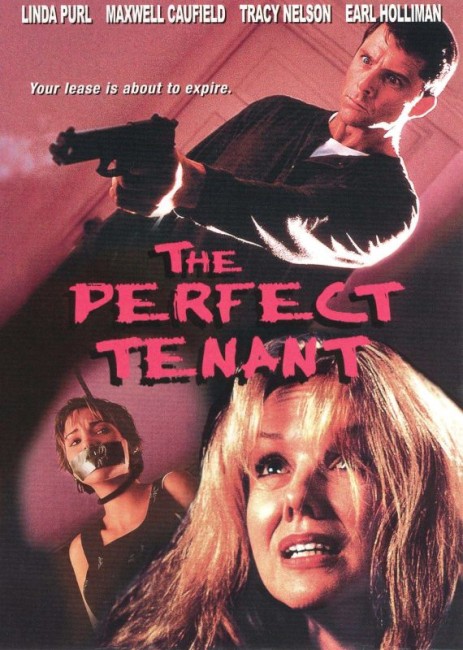 Brian Hartwell murders the lodger who occupies single mother Jessica Michaels’ sleepout and then applies to be her new tenant. She needs the money and happily accepts Brian as her new boarder. However, Brian is not the psychology student that he claims to be – he is in fact ex-psychiatric patient Daniel Summer. As a child, Daniel was witness as his father hung himself over false accusations of having sex with a minor – who was none of the other than the young Jessica. Having moved in, Daniel now sets about taking revenge against Jessica, whom he blames for having caused his father’s death.

The Perfect Tenant follows the formula that has been established by most of Pierre David’s psycho-thrillers – a stranger moves into a household with the intention of exacting vengeance for some past crime, various incidental witnesses who expose the threat are killed, while everyone except the object of vengeance suspects that the stranger is the killer. There is also the invariable person who turns up from the killer’s past and is disposed of for threatening to expose them. David also has the habit of bringing former tv stars out of retirement in bit parts – The Perfect Tenant, for example, features Earl Holliman, once the co-star of the hit tv series Police Woman (1974-8).

The Perfect Tenant follows the simple and easy formula of Pierre David’s films and sits just between the effective and the routine. There are some effective suspense sequences – like the scene where Maxwell Caulfield enters the house and is forced to hide in the closet when daughter Stacy Hogue come back, only for her to then decide that she wants to get a top out of the closet; or the scene where Tracy Nelson carries through her threat to ring Linda Purl, only for Maxwell Caulfield to strangle her and Purl to hear the sounds of the murder down the other end of the phone. There is a wonderfully disturbing moment where Maxwell Caulfield goes to talk to Linda Purl’s father Earl Holliman about her and suddenly starts saying: “She’s hungry for it. Always has been. Ever since Junior High.” There is a fine climax with Linda Purl undermining the vengeful Maxwell Caulfield’s beliefs about his father and her suspenseful attempt to save her daughter’s life as Caulfield tries to hang her from the dining room table in the middle of which the table starts coming apart.

On the other hand, there are definite times when The Perfect Tenant starts to become campy – like the initial scenes where Maxwell Caulfield turns up in the first tenant’s apartment and then bursts out with the line “Did I come at a wrong time?” There is a silly dream scene where Maxwell Caulfield tells Linda Purl the truth and then shoots her. There are some passable twists but ultimately The Perfect Tenant is a formulaic and predictable film that is familiar to anyone who has seen any of Pierre David’s other psycho-thrillers.

Maxwell Caulfield has a set of boyish looks that sit just between bland and sinister threat. A large part of the show is stolen away from him by Tracy Nelson, who also played the title character in David’s The Perfect Nanny and proves a considerable scene-stealer here.