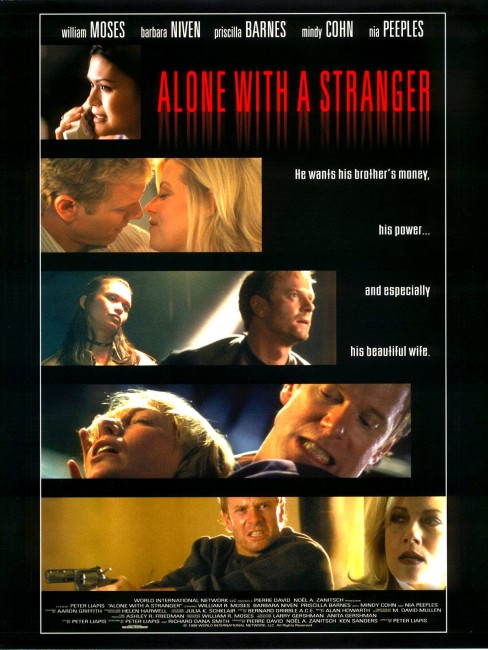 L.A. businessman James Kennington is leaving to go home one night when he is approached in the parking lot by an exact double of himself. The double is conspiring with his secretary Beth and the two of them knock James out and chain him up in Beth’s cellar. The double explains that he is Max, the twin brother that James never knew he had. He and Beth have bugged James’s house in order to learn every detail about his life. Max now successfully imposts James and slots into his life in order to sell James’s company and steal its $18 million worth. However, when people around him, from the babysitter to the woman James was having an affair with to James’s young son, threaten to expose him or block his plans, Max is quite prepared to kill.

Most of Pierre David’s earlier films were strictly routine but his later ones started to develop some sophistication. The extremely good news is that Alone with a Stranger is the best psycho-thriller that Pierre David has managed to produce to date. It is a exceptional and surprisingly good film. The director is Peter Liapis, previously an actor – his best-known role was as the young Satanist in Ghoulies (1985). Peter Liapis had made his directing debut under Pierre David with Captured (1998) and went onto make The Stepdaughter (2000), as well as to write Stranger in the House (1997).

Alone with a Stranger captivates from the opening scenes. Peter Liapis catches attention with the sharp contrasts he makes – between the blondely handsome and smiling William R. Moses who seems the perfect husband but is then seen breaking into psychologist Christopher Kriesa’s office and stabbing him; to Moses going home to wife Barbara Niven, while at the same time being shown to be having an affair with Nia Peeples, the contrasts none the more apparent than when the film cuts from the apparent loving platitudes Moses makes to Niven to these being sarcastically commented on and echoed by Peeples as she electronically eavesdrops on everything that is being said.

Liapis then starts to spin the set-up through a series of increasingly wilder surprises – the revelation that Nia Peeples is William R. Moses’s secretary and that while she is apparently conspiring with him she is also cancelling his appointments without his knowledge; and then everything being spun on its head as Moses departs from work only to encounter a twin of himself in the carpark. In this stunning turnaround, the ingenuity of what Peter Liapis has been misleading us to believe – that it is the double having an affair with Nia Peeples and eavesdropping and spying on him – starts to become apparent.

The film is filled with these ingenious twists and ambiguities. Peter Liapis draws enormous suspense out of the minutiae of the bad William R. Moses slotting into the other Moses’s domestic situation – his blank horror when Barbara Niven suddenly says that they met before he thought they did; simply his sitting in the wrong seat at the breakfast table and not reading the newspaper as he always does.

Elsewhere, Liapis is constantly throwing twists and tensions at us – the revelation that good Moses was having an affair with another woman; his attempts to break out of the cellar; Nia Peeples’ distrust of bad Moses; his being drawn towards the domesticated bliss of the good Moses’s wholesome family life; the spanner thrown in the works when the kid refuses to go to New York. Alone with a Stranger reaches a superbly sustained climax where bad Moses manages to swing everything around to make Barbara Niven think that good Moses is the real villain and everything wavers on her confusion between the two of them.

William R. Moses (a regular in Pierre David’s films, who also takes an associate producer role here) gives an excellent duo of performances. There is the wonderfully nasty moment where he persuades son Scotty Cox to come out of hiding in the bathroom and then grabs him and threatens to put his hand down to kitchen disposal unit, leaving him with the threat: “David, I don’t think your mother would want to find out what happened here today. Because you know what? Her hand fits in the disposal too.” The only complaint about this otherwise amazingly good film is that it has been slapped with a generic and meaningless title that has nothing to do with anything that happens throughout.