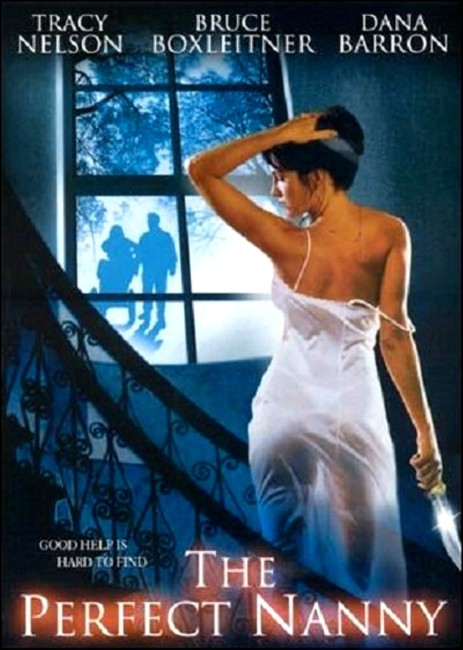 After finding her husband in bed with another woman, Andrea McBride stabs herself. She survives and is placed in a psychiatric institution. Three years later, she is deemed well and released again. She gets a job at a nanny temping agency in Los Angeles. She lives in a perpetual world of romance novels. When an application for a position as a babysitter for neurosurgeon James Lewis comes, Andrea immediately creates a romantic fantasy of he being hers. She applies for the job using the name and references of another nanny Nikki Harcourt. Determined to get the job, she kills a rival applicant. Once in the Lewis house, she does everything possible to make James hers, including killing off other potential romantic rivals and those from her past who threaten to expose her identity.

The Perfect Nanny‘s director Rob Malenfant had earlier directed one of the best of Pierre David’s psycho-thrillers, the witty The Landlady. The Perfect Nanny never quite scales the same heights that The Landlady did but is better than average among David’s psycho-thrillers. The plot adheres to the same formula that most of Pierre David’s films do – one can see the predictable characters, situations and contrivations being wheeled into place. Within the formula, Rob Malenfant manages to conduct a reasonable degree of tension and some fair surprises. The script arranges some decent twists against Tracy Nelson, especially in the characters put up against her – the white trash husband (Darren Gray Ward), Bruce Boxleitner’s initially friendly but suspicious teenage daughter (Dana Barron) and Nelson’s scheming mother (Katherine Helmond). The results are modestly effective.

The film is outstandingly well cast. Tracy Nelson, best known as the female sidekick in The Father Dowling Mysteries (1989-91) and who has appeared in a couple of other Pierre David films, has a wonderfully pale, demure asexual nervousness and is thoroughly convincing, almost perfectly cast in the title role. Opposite her, the warmly charismatic Bruce Boxleitner, who also associate produces the film, is equally well cast as her romantic object of affections. Dana Barron has a perky sexiness and above all a strong intelligence in a fine performance as the teenage daughter (a part that Barron managed to be cast in despite being 32 years old at the time the film was made). However, the scene-stealer in the film ends up being Katherine Helmond, who proves highly amusing with her eccentric spiels about vitamins, but also does an excellent job in showing a flintily scheming craftiness beneath.