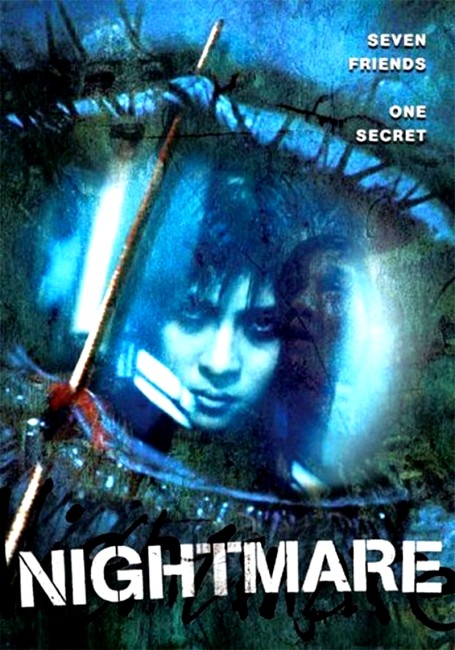 Sun-ae returns to Seoul after two years in the USA and goes to stay with her good friend Hye-jin. Hye-jin is disturbed when Sun-ae insists that their dead friend Kyung-ah is following her. Kyung-ah was a shy girl that they had invited into their clique of friends two years earlier. She had grown up in a village with one of the others of the group. It was believed that she had strange powers and had killed a number of people using these. Shortly after this revelation, Kyung-ah committed suicide, jumping from a rooftop. The others doubt Sun-ae’s claims but are forced to believe otherwise when Kyung-ah appears and starts to kill them.

In recent years, South Korea has made rapid leaps in trying to enter world cinema, offering up its own variety of Hong Kong hard-boiled crime thrillers and martial arts films among other genres. Nightmare leaps on the genre of the modern American teen horror film. It comes with a refreshing all-out ferocity, delivering the goods in a way that shows up the likes of I Know What You Did Last Summer (1997), Urban Legend (1998) and Soul Survivors (2001) for the tepid, middle-of-the-road efforts they are.

Debuting director Ahn Byung-Ki has style to spare. This is immediately evident from the opening scene set in a morgue lit in an eerie blue where we see a stomach-churning closeup of a mortician poking a needle through a dead girl’s eyelids and sewing her eyes shut, only for her eyes to snap open and tear the threads out once he puts her back in the drawer.

The plot about a group of teenagers being haunted by a murdered person out of their guilty past is standard for the genre – indeed has many similarities to the aforementioned I Know What You Did Last Summer – but it is the sheer spookiness that Ahn Byung-Ki invests the film with that makes it stand out.

Of particular note here is the unnerving presence of Ha Ji-Weon as a kind of undead Goth teen. Ahn pops her up in the most unexpected places – emerging from beneath a table holding a pencil that has just fallen off, walking through a busload of corpses with bloodied face, crawling up the bed toward a just-woken victim, her hand coming out of the screen of a camcorder, looking out the back window of a car, even at the bottom of a swimming pool. There are no great twists of plot, no amazing character revelations, just an all-out determination to spook an audience. The effect is unnervingly scary.