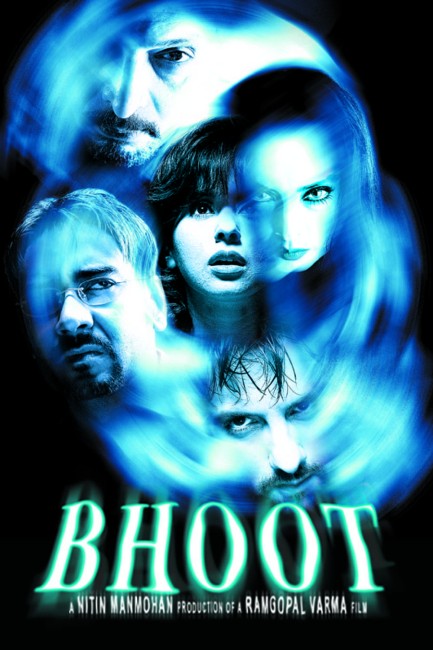 Vishal, a Mumbai stockbroker, moves into a new apartment with his wife Swati. He learns that the previous tenant Manjeet Khosla jumped to her death from the balcony along with her young son. Swati sees a number of apparitions and becomes convinced that the apartment in haunted by Manjeet’s ghost. Vishal sees nothing and insists on taking her to a doctor who believes that she is suffering from somnambulism (sleepwalking). As the hauntings becomes increasingly more sinister, Vishal is forced to realise that Swati has become possessed by the spirit of Manjeet.

In the extraordinarily prolific industry that is Bollywood or Indian cinema, films with a fantastic theme – science-fiction and horror – are relatively rare. Bhoot is one such venture into the Bollywood ghost story, although even among this genre the film was considered unusual. It defied many of the predominating trends of Bollywood cinema – it was, for instance, one of the few films to defy the unwritten rule that all Indian films must have the lead actors burst into (dubbed) song at regular intervals; it also lacks the lush sometimes over-the-top romanticism that is frequently common to much of Indian cinema and features much more mundanely everyday and unglamourised actors; it was also purportedly much shorter than the average Bollywood film. The film met with mixed success, although is by no means an unworthy effort.

Director Ramgopal Varma has an assured grasp of the mechanics of the horror film. The film captivates from the opening credits – all letters forming in iridescent gold shimmering in and out of focus as the camera cruises the streets of Bombay. Some of the shocks Ramgopal Varma pulls off are highly effective – the mystery girl’s spooky appearances behind wife Urmila Matondkar in a mirror or in the midst of a beach carnival, the child’s shadow appearing down a hallway. There is a particularly effective scene where the husband Ajay Devgan has a dream where he imagines the wife appearing and suddenly without any warning stabbing him. Several times throughout the wife indicates somebody else is sitting in empty places in the house and Varma’s camera turns away to look, managing to spookily convey the presence of something there even though we see nothing. The film is filled with a constant susurrus and unexpected aural jumps that keeps you on edge. Varma does throw in a requisite love scene of sorts but this is shot suffused in midnight blue where the emphasis is not at all on the erotic but suggestive of something loomingly sinister. The odd scene falls into the schlocky – like the wife imaging she is surrounded by zombie patrons in an IMAX theatre – but mostly Ramgopal Varma’s direction has a considerable assurance. In many ways, Bhoot is almost like a modern Japanese horror film shot in Bollywood terms – the white-faced woman with hair hanging over her eyes is a central facet of almost every Japanese film since Ring (1998), while the plot resembles one of the Ju-on films.

On the minus side, Ramgopal Varma loses the latter half of the film. At about the 65-minute mark, the film suddenly turns into a copy of The Exorcist (1973) with the wife becoming possessed by the dead girl’s spirit. Bollywood cinema will often outrightly borrow the plots of Hollywood counterparts and here Bhoot has fairly much copied the scenes from The Exorcist where Linda Blair taunts Jason Miller by imitating his dead mother’s voice in having Urmila Matondkar taunting psychiatrist Victor Banerjee, imitating the voice of his dying daughter.

Director Ramgopal Varma also copied the plot of The Exorcist with his earlier film Raat (1992). This half of the film is less interesting than the first – the effectively haunted mood that Varma has conjured earlier drops off and the film is taken over by a possession murder mystery with the dead woman trying to bring her murderer to justice. This does lead to a modestly effective ending with the wife making the murderer confess in front of the police by psychically suspending him over a set of spikes and a coda where he is sent to jail only to find the ghost waiting in his cell.

Ramgopal Varma later made a sequel with Bhoot Returns (2012). There was a further Tamil-language version of the film made with Shock (2004).