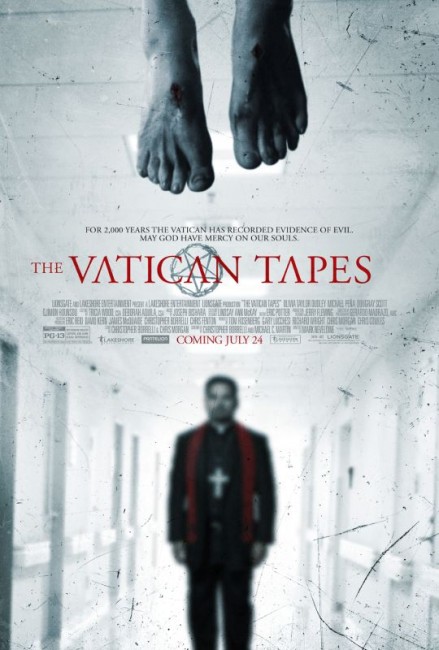 As her father returns home from military service, Angela Holmes begins to display erratic behaviour. She is rushed to hospital and thought to be suffering from psychiatric problems. There she appears to threaten a baby and may have caused a police detective to blind himself. Placed in a psychiatric institution, she causes all of the other patients to become a frenzied mob. Father Lozano believes that she is possessed and calls in Cardinal Bruun from The Vatican who determines to conduct an exorcism. However, as they set about doing so, they realise they may be up against something more powerful than they anticipated.

The Vatican Tapes was the first solo film from Mark Neveldine, who was previously one half of the directing duo who billed themselves variously as Neveldine & Taylor or Neveldine/Taylor. Along with his partner Brian Taylor, Neveldine first co-directed the hyper-adrenalised action hit Crank (2006) and its sequel Crank: High Voltage (2009), as well as the sf film Gamer (2009) and the Marvel Comics adaptation Ghost Rider: Spirit of Vengeance (2012). They also wrote the scripts for Pathology (2008) and Jonah Hex (2010). I can’t say I have ever had much liking for Neveldine/Taylor’s films, which seem to be all frenetically paced action sequences filled with constant shakycam as though directed by two speed freaks. On his own, Mark Neveldine has also produced Officer Downe (2016) and Urge (2016), while Taylor went on to make the mass insanity film Mom & Dad (2017) and create the splendidly deranged tv series Happy! (2017-9) and the Dystopian future mini-series Brave New World (2020).

In all of these cases, it feels like each entrant is cycling around a small number of cliches that are repeated from film to film. Not that one believes in the actuality of demonic possession but if just one of the filmmakers sat down with some of the people who claim to be exorcists in real life or visited some of the churches beyond the Catholics, we would have some very different ideas and approaches into the mix. Instead, what we end up with are a limited number of stale ideas that are being repeated from film to film.

In another cliche, the Catholics always seem to be the front line of defence when it comes to demonic battles – the opening credits here even announce that “For two thousand years now, The Vatican has investigated occurrences of unexplained evil” – a somewhat broad and unjustified claim where we are not sure whether the film refers to The Vatican as Catholic authority or the buildings in Rome, neither of which were in existence 2000 years ago.

The Vatican Tapes is a perfect example of this. Neveldine is constantly repeating hoary cliches. Even when he is not, the score is obtrusively nudging us towards effect where even something everyday like Olivia Taylor Dudley drinking a bottle of water is made to seem sinister. For a time, it almost seems that what we are getting is another cliche treatment of recent years – the Found Footage exorcism film and, although some of what we see is relayed by handicam and cctv footage, this is not the case. Or at least, as with a number of other films of recent, we at least seem to be heading towards the post-Found Footage film where the stylistic tricks of Found Footage are now integrated with regular third-person dramatic set-ups.

Much of the film feels like Neveldine creating random scenes that reach for effect without any rationale as to why they would be happening – birds randomly attack a bus; after walking into Olivia Taylor Dudley’s hospital room, a cop (Jarvis George) gouges his eyes out with broken bottles; she walks into the paediatric ward and menacingly picks up a baby; she causes all of the patients in the psychiatric ward to go crazy in a frenzied mass; an orderly is killed by falling masonry.

Things get mildly more interesting during the exorcism scenes where Neveldine at least tries to shake up the cliches and add something different – Olivia Taylor Dudley vomiting up The Host; in one peculiar effect, producing eggs out of her mouth; and not merely being tied to the bed and rotating her head but having to be chained to the wall before tearing the chains out and twisting her bones into unnatural shapes. These scenes also give us an exorcist priest (Peter Andersson) who seems a whole lot more morally ambiguous than usual – he at one point is intent on killing the possessed girl. All of this gets a little absurdly over-the-top at the end with the manifestation of stigmata (something that in actuality supposedly afflicts saints and the extremely devout rather than the possessed), while the girl is revealed as not just being possessed but also the incarnation of The Antichrist, as well as the entire attic being blown up.