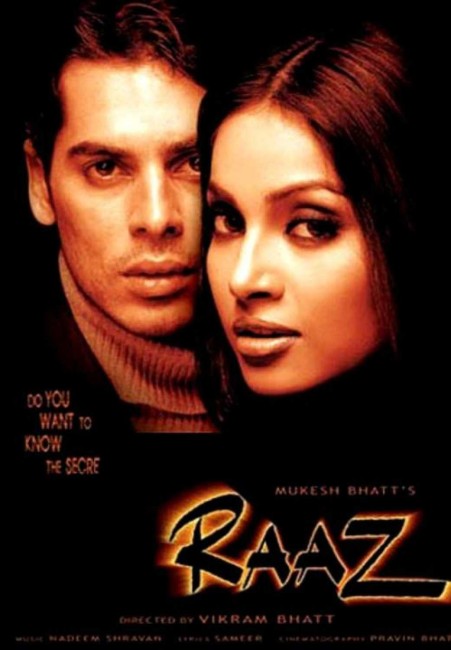 Sanjana Dhanraj feels neglected by her husband Aditya, a wealthy businessman. After taking too many sleeping pills, she has a car crash. The two of them decide to go away together so that she can recover and to take time to rekindle their relationship. She insists that they go to their house in Ooty. Once there however, she believes that she can hear the screams of a girl, even though nobody else can. Aditya thinks she might be going crazy. She and her friend Priya consult an expert and come to believe that a malevolent spirit is haunting the house. As the hauntings become more malicious, Sanjana comes to the realisation that Aditya is hiding a secret.

It surprises some people to learn that India actually has the largest cinema industry of any country in the world. Hollywood films might reach a far greater percentage of the world’s population overall but Indian (or Bollywood) cinema is seen by a far greater number of people within in its native country than American films are and is also the country with the greatest number of films made in total annually. Bollywood was so named as a concatenation of Bombay (Mumbai), which is the centre of Indian filmmaking, and Hollywood. Of course, Bollywood cinema is very different to Hollywood moviemaking. Films are generally made on much lower budgets. While Hollywood tends to fall into certain genres – thriller, teen, sf, action etc – almost all of Bollywood’s output seems made to a single formula, one that seems to involve a heady mix of romance, drama between clearcut caricatures and, of course, a good deal of singing but rarely much in the way of genre bending or works that go against the grain – there is, for example, very little horror and science-fiction in Bollywood. Bollywood also has no equivalent of the Hollywood studio system and instead films are independently financed and can sometimes be backed by disreputable and underworld sources.

Raaz is one of the rare Bollywood ventures into horror cinema. Bollywood is often blatantly imitative of Western films and will happily steal entire plots outright. Raaz has been fairly much stolen directly from What Lies Beneath (2000) – it features an identical plot about a wife believing that she is being haunted and then finding her husband has been having an affair with the dead woman. Director Vikram Bhatt even goes so far as to replicate the scene where the wife becomes sensually possessed by the other woman and throws the husband on the bed. At another point, the film unashamedly borrows the central image from The Exorcist (1973) of a possessed woman backlit and mouthing obscenities on a rocking bed.

As a horror film, Raaz is down about the level of a cheap mid-1980s American video release. At most, Vikram Bhatt has a routine technical competence but little in the way of style. His shocks are quite schlocky – mystery screams coming out of the woods, breath misting on a window pane, blood pouring from chandeliers, doors slamming, lights going on and off, a veryunconvincing special effect with a tree log flying down at people – while his creation of atmosphere is rudimentary at best. The shocks are predictable – you can guarantee when someone backs into the camera that is the direction from which someone will surprise them, or that the moment the camera focuses on a car door the locks will slam. The score is clichéd and unsubtle. Most of the first half of the film is a hackneyed variant on the plot device of the wife with the unstable mental past seeing ghosts while everyone around her including her husband thinks that she is seeing things. There is one good scare late in the show where we see Bipashu Basu turn up at the house to tell Dino Morea to come away with her because he is at danger from Malina, only for the real Basu to then turn up and realise that the ghost has lured him away pretending to be her. Bhatt eventually winds the melodrama up to the equivalent of a standard cheap Evil Dead (1982) ripoff in a climax that involves possessed zombies, a victim being electrocuted by a flying electric cable and the heroine having to dispatch a zombie by ramming it repeatedly with a car, before setting the dead woman’s grave on fire.

However, Vikram Bhatt reserves his best for the musical numbers. At face value, the idea of a horror movie with songs seems an odd one. Bhatt’s cleverness is using the songs as a form of internal monologue, of contrasting the scenes of unhappiness experienced by Bipasha Basu in the present with the songs that flashback to the early days of her marriage and show her happiness with a stylised romanticism. It is a unique device and one that actually legitimises the use of the songs. Bhatt directs with a real passion and the three leads are at their most expressive during these scenes – the actress playing the longsuffering wife, Bipashu Basu, in particular has a bewitching beauty. The songs are even surprisingly listenable.

The film comes into its own particularly during the latter third where Vikram Bhatt forgets about the schlocky pop-up shocks and spends some time flashing back to tell us the story of the affair. There is one particularly haunting and sensual scene where the husband is tempted by the surreal image of Malina Sharma appearing by the roadside and drifting through the trees playing a violin, which leads into a beautifully eerie song in a minor key. This precipitates an extraordinarily sensual flashback montage filled with teasing images of the two exchanging much in the way of smouldering looks, necking and almost kissing against walls and fountains in the street, frolicking against a waterfall. What is so extraordinary about the scene is the pure sensuality that almost burns off the screen in spite of Indian censorship restrictions – which forbid the portrayal of kissing on screen, least of all any nudity. All that one sees are lips against necks, a man’s bare back, the suggestion of the lovers nude behind a tree or beyond the expanse of the camera shot. These scenes are given a great deal of additional dynamism by Malina Sharma who plays the part of a mentally unbalanced woman with intense conviction.

As was also the case with What Lies Beneath, Raaz is really ultimately a supernatural version of Fatal Attraction (1987). Raaz in its melodramatic way remakes Fatal Attraction even more so than What Lies Beneath did. It places much more emphasis on the infidelity love triangle than What Lies did where the dead woman’s story took place in the story’s past and was never dwelt upon. Like Fatal Attraction, Raaz also ultimately reinforces a traditional view of marriage – that a man can be forgiven for straying if he returns and demonstrates that he really does love his wife. Although the end of the film here extols the virtues of marriage to even more of an extreme than Fatal Attraction did, with the married couple reconciled and going out on a song that tells us about how the joys of faithfulness lead to a transcendental love that carries on into the afterlife.

Before going, one should note one of the oddest aspects about the film, which is the dialogue. This principally comes in Hindi but also switches back and forward to English, sometimes within the space of a single sentence.

There have been three sequels unconnected other than featuring similar possession plots with Raaz: The Mystery Continues (2009), Raaz: The Third Dimension (2012) and Raaz Reboot (2016).