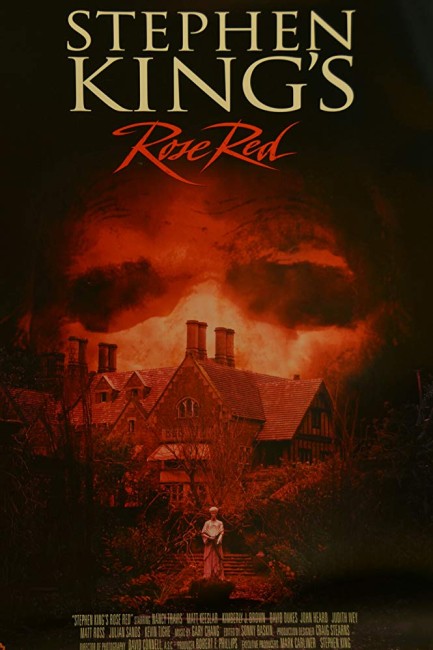 Parapsychologist Joyce Reardon is determined to mount an expedition to explore the phenomena at Seattle’s notoriously haunted Rimbauer house, which has been nicknamed Rose Red. She gathers a group of psychics, including the powerful but autistic psychokinetic Annie Wheaton. Her efforts result in her tenure being cancelled by her self-important department head Professor Carl Miller who is determined to embarrass her but she presses on. Once in the house, the psychics find that Rose Red is feeding upon their energy and using it to regenerate itself. Soon the manifestations they encounter become increasingly malicious and threatening.

Rose Red was purportedly inspired by Steven Spielberg, who invited Stephen King to come up with the idea for the scariest movie he could think of. King appears to have taken inspiration from The Haunting (1963) and its story of a parapsychologist and a group of psychics investigating a haunted house. In his book-length horror essay Danse Macabre (1981), King spoke admiringly at some length of the original Shirley Jackson novel The Haunting of Hell House (1959) that was the basis for The Haunting.

The Rose Red mini-series has been deliberately cast with relative unknowns. This provides a distinct uncertainty factor – there is no identifiable handsome leading man and woman, for example, thus one is not in a position of being able to easily guess who is likely to survive. At the forefront of the show is the greatly under-appreciated Nancy Travis, who should have been a much more high profile actress than she is. Nancy Travis gives a wonderfully perky performance that becomes increasingly sinister throughout. Elsewhere, Matt Ross manages to give a remarkably unlikeable performance as the obnoxious Emery. Julian Sands, in one of his least over-the-top roles, plays with considerable handsome charm. The mini-series also gives an international break to Melanie Lynskey, the teenage find from Peter Jackson’s Heavenly Creatures (1994).

Direction of the show has been handed over to former stuntman Craig R. Baxley. Craig R. Baxley had previously directed the Stephen King tv adaptations of Storm of the Century and subsequently The Diary of Ellen Rimbauer and Kingdom Hospital, as well as made original genre films such as Dark Angel/I Come in Peace (1990), Deep Red (1994), Under Pressure/Bad Day on the Block (1997) and Left Behind: World at War (2005) and tv work like The Glow (2002), The Triangle (2005) and the amazing The Lost Room (2006).

Craig R. Baxley revs up some effectively spooky moments. There is one especially good scene early on in the show where student brownnose Jimmi Simpson turns up at the house and the door is mysteriously opened and he welcomed inside by Tsidii Leloka’s maid, whom we recognise from the flashbacks to the past. There is a particularly imaginative flashback to Annie’s psychic hailstorms and a beautiful shot where she causes the water pipes to burst all over the property and the water to suddenly freeze in mid-air. There are also some excellent sets – the Perspective Hallway, the Mirror Library and one room that is built upside down. King gives the house the intriguing feature of being able to spontaneously rearrange its spatial geometry, such that floor plans are useless and nobody knows how many rooms there are. This leads to one spooky moment where the party mark their trail with a rope and then return to find the rope buried inside the middle of a wall.

Sometimes Craig Baxley’s scares are a little schlocky – bodies popping up in bed with Matt Ross, out of mirrors – and the series is a little too reliant on visual and makeup effects rather than the subtle psychological ambiguity that Robert Wise imbued The Haunting with. There is also the need to have to go for a big effects-heavy climactic finale, where Nancy Travis’s otherwise worthy playing is allowed to become far too broad.

On the whole though, Craig R. Baxley does a fair job and racks up a reasonable scare show. Certainly, Baxley is a far better director than Stephen King’s other tv collaborator – the perpetually awful Mick Garris, who made the likes of Sleepwalkers (1992), The Stand, The Shining, Desperation and Bag of Bones. Perhaps Rose Red‘s ultimate weakness is that Craig R. Baxley, while a competent commercial craftsman, is not a Robert Wise and that Rose Red is merely a modestly effective haunted house story but not quite a classic. Rose Red stands too much in the shadow of The Haunting and the Haunting-influenced The Legend of Hell House (1973). Stephen King also wrote The Shining (1977), an excellent exhumation of the haunted house genre that delved deeply inside the psychological relationship between inhabitants and haunted dwellings. By contrast, Rose Red seems a competently made formula ghost story, although not one that pushes the envelope of the genre in a radically redefining or even classic way. Certainly, within the constraints of formula, Stephen King writes well. He has researched his parapsychological doubletalk and in the last episode manages to wind the various character tensions up to an effective pressure cooker situation.

The Diary of Ellen Rimbauer (2003), also directed by Craig R. Baxley and produced but not written by Stephen King, was a tv movie prequel that went back to tell the events leading up to the haunting of the house.