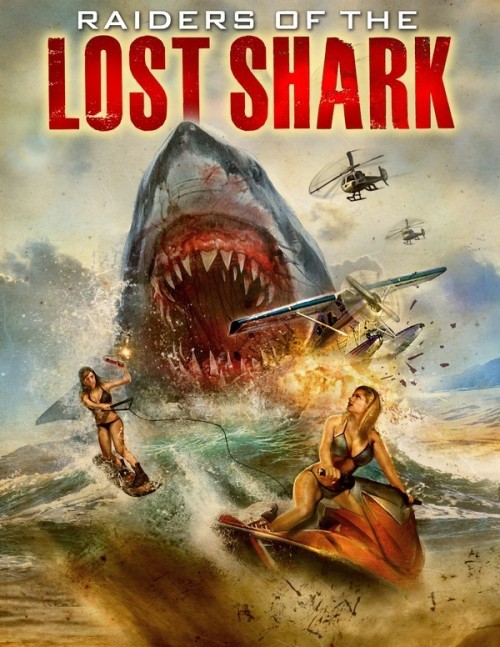 People are being devoured by a shark in the lake on the island offshore from Munster, Ontario. Professor Carly Reynolds teaches a class on prehistoric lifeforms. Three of her students hear the story of how Carly’s sister was killed by a shark on the island several years earlier and rent a boat to head out there. Carly is recruited by her former employer Janet, who owns the island, to find a way to deal with the prehistoric megalodon shark that has been unearthed during drilling. As they arrive on the island, they discover that Janet’s former husband, scientist Brad Howell, has genetically engineered the shark to be able to fly.

The opening credits of Raiders of the Lost Shark start off with the improbable claim that everything is based on a true story before the last of the cards states “Just messing with you,” something that sits between mildly amusing and a cynical deriding of the audience for taking the film seriously before it has even begun. The main problem is that this is a shark film that is taking itself seriously in the post-Sharknado era. Beyond the opening credit, there is a complete lack of the “we’re not taking any of this seriously either so why should you?” ethos that informs Sharknado and most of the abovementioned ilk. Indeed, the most amusingly tongue-in-cheek thing about Raiders of the Lost Shark is the title. Oh wait there is a lady CEO called Janet who later encounters her ex, the mad scientist of the show (Richard Groen), who is called Brad, which precipitates a bunch of inane “damnit Janet” lines and other references to The Rocky Horror Picture Show (1975).

The film is filled with absurd incongruities and continuity gaffes – in the opening scenes, the park rangers and the girls they are partying with are constantly talking about it being the next morning or having to deal with hangovers in daylight despite the fact that all of the preceding scenes take place in broad daylight (it is as though someone forgot to process day for night at the lab). The plot seems all over the place without anybody seeming to have cared – one minute we are told the shark is a prehistoric megalodon that has just been unearthed from a cave on the island by oil drilling but despite just being discovered it also managed to kill Candice Lidstone’s sister several years earlier and then the next minute it is something that has been genetically engineered by the mad scientist; one minute we are led to believe the action is taking place on an island, the next we learn it is a lake or taking place near a shoreline.

On a technical level, the film is shabby with poor sound recording and the camerawork giving evidence of low-budget videography. The cast all seem non-professionals – certainly, there are no names that one has ever heard of before – and strain to seem convincing. Scott McClelland gives a ridiculous comic relief performance as a lazy local police captain who at one point is discovered sleeping on top of his desk as though that is the most natural place in the world to take a nap. The worst of these is Tanisha Laroda-Valcin in a brief scene on the lakeshore before seeing her man being eaten where her screaming histrionics set a new record for bad movie acting.

The shark effects are some of the worst to appear in a modern film since Birdemic: Shock and Terror (2008). Some of the effects are produced by different companies – the water-based ones are terrible but the ones with the flying shark are even worse. The point that Raiders of the Lost Shark reaches a level of bad moviemaking not seen since well Birdemic occurs when one of the worst optically inserted sharks ever leaps out of the water to devour Duncan Milloy. A little later there is the prize bad movie line where Candice Lidstone says “Is that a flying shark?” and surely enough one passes overhead and seconds later we see it attacking and blowing up a plane in an utterly unconvincing explosion effect.

(Winner for Worst Film in this site’s Worst Films of 2015 list).