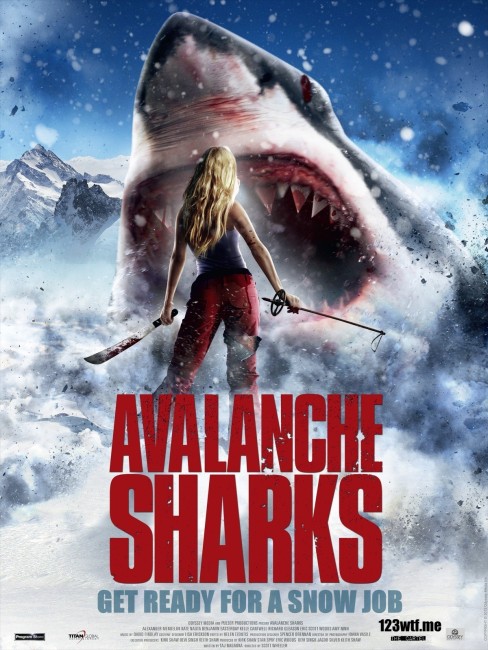 A guy in a hospital bed tells a nurse who claims to be a figment of his imagination the story of what happened on Mammoth Mountain. Various people gathered at the ski resort there for Spring Break. On the slopes, several skiers started to be attacked by sharks that moved through the snow. These were believed to be Native American spirits known as Skookum. After being convinced of the existence of the menace, the sheriff tried to get the mountain closed down but was removed from his position by the mayor and resort owner not wanting to lose profits. Together he and several others tried to grapple with the menace of the snow sharks.

The Asylum’s Sharknado (2013) became the apotheosis of this particular genre, an instant bad movie classic in the making. Coming out around the same time as Sharknado, Avalanche Sharks enters a genre where you feel its nadir has been reached and after which it is impossible for anybody to do a serious killer shark film again. The timing is such that it is hard to say if Avalanche Sharks was quickly rushed out to exploit Sharknado or had been in production before the other became a sensation and was just following a generalised trend towards gonzo shark films – one suspects the latter.

As an absurdly unserious killer shark in the same vein as Sharknado, Avalanche Sharks promptly heads into totally demented territory. The film opens with a narrator lying in a hospital bed being tended by a seductive nurse (an unrecognisable Gina Holden) who insists that she is a hallucination from a porn film – even announces at one point that she is off to find another nurse to make out with – and alternately teases/tortures him into telling the story. The story gets even more amusing when we get images of two snowboarders heading down the mountain and being attacked by a shark that swims through the snow (represented by the cheap digital animation of a glowing blue fin) and leaps out of to devour them.

The film seems to be trying to make these shark attacks as absurd as possible – at one point, Yasmin Yeganeh is devoured by a shark that jumps out at her from only about a six-inch layer of snow through which you can see patches of grass poking through beneath. In another demented moment, a shark somehow manages to leap up from inside a hot tub and devour the two partying bikini babes inside.

Each of these gonzo killer shark films seems to have at least one totally WTF moment to them – the shark jumping out of the ocean to bite an airliner in half in Mega Shark vs Giant Octopus, Ian Ziering facing off a shark with a chainsaw at the climax of Sharknado. That moment here comes early in the show where the narrator gives us the possible explanation of the sharks as alien beings, which is illustrated by the totally nutzoid flashback image of hundreds of sharks taking to space in a fleet on an interstellar journey.

In between the gonzo shark attacks, Avalanche Sharks falls back on the story cliches of the genre. It wheels out the cliche characters – Jeff Ouimet as a variant on Crazy Ralph from Friday the 13th (1980) offering wild-eyed warnings about the menace that nobody heeds; the sheriff who know what is going on and tries to warn people a la Roy Scheider in Jaws only to be removed from office by the mayor and corrupt resort owner because it is the busiest weekend of the year. These scenes are played relatively seriously and the lines lack the deadpan absurdity they had in Sharknado. Nevertheless, the film has its outright entertainment value.