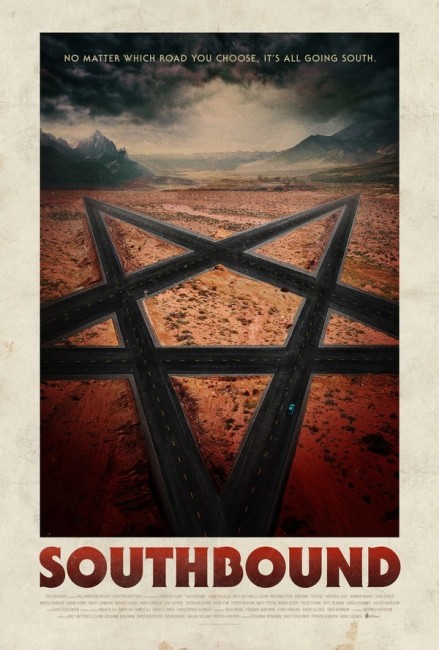 The Way In & The Way Out

The Way In:– Two men driving along a desert road are followed by mysterious creatures floating in the air. After stopping at a roadside gas station, they find that every attempt to leave keeps bringing them back to the gas station. Siren:– The van of three girl band members breaks down in the middle of a desert road. The girls accept a ride from a passing couple who invite them to stay the night. However, as they settle in, it becomes apparent that something strange is going on in the house. The Accident:– Distracted by texting on his phone while driving, Lucas hits a girl on the road. With her still alive, the 911 responder urges him to drive her to a nearby hospital. However, this is strangely deserted and Lucas is then ordered by the responder to operate himself. Jailbreak:– Danny bursts into a bar with a shotgun, certain that his missing sister Jesse, who he has been searching for for years, is there. The barman agrees to escort Danny to where she is but it becomes apparent that things are no longer normal. The Way Out:– A husband, wife and their teenage daughter arrive home, only to be burst in on by armed men wearing masks.

Both the opening and closing segment, entitled respectively The Way In and The Way Out, come from the collective known as Radio Silence, which consists of Matt Bettinelli-Olpin, Tyler Gillett, Justin Martinez and Chad Villella. The four made the 10/31/98 episode of V/H/S and Bettinelli-Olpin and Gillett went onto direct the feature films Devil’s Due (2014) and Ready or Not (2019). The Way In begins with two men driving through the desert haunted by strange shapes floating in the air, which resemble flying skeletons with tentacles and seedpods for heads. They arrive at a gas station but find they are unable to leave and keep driving back to the same spot, whereupon the shapes close in.

The episode has a decidedly uncanny atmosphere, the least of which is trying to understand what is going on. The time pocket theme has been used before – most notably in the recent Mexican film The Incident (2014), which this resembles in several ways – but works well again. The episode suffers from petering off to a non-ending when it feels like it should have gone further. The Way Out starts out seeming as though it is a home invasion piece but comes with a decided left field twist in mid-story, which leads in to the start of the first episode. Put together, the two stories work far more satisfyingly than they do as individual episodes.

The second episode Siren comes from Roxanne Benjamin who makes her directorial debut here, having previously worked as a producer on all three V/H/S films and subsequently going on to make the Don’t Fall episode of XX. The episode has the same structure as all the others – ordinary people on the road who take a step over into the uncanny. In this case, a trio of girls are invited home by a family who prove to be unsettlingly normal. The off-puttingly normal family theme is one that has been done in a number of other films. This follows their general path without doing anything vastly original. Like The Way In, this suffers from feeling like it is building to something but ends before the story reaches a proper conclusion (or perhaps because of the need to segue into the subsequent episode).

The Accident is the standout episode of the show for my money. This comes from David Bruckner who has also worked on the multi-director The Signal (2007), made the Amateur Night segment of V/H/S and the full-length The Ritual (2017). There is something out of the blue shocking to the scenes with Mather Zickel running a girl down on the road, carrying her twisted and still gasping body into his car, driving in search of a hospital, finding it to be inexplicably deserted and then being ordered to operate on her by the 911 responder. One of the big shock images of the piece is of him with one hand stuck halfway down her gasping throat and then following orders to cut open her ribcage and reach in until his arm is buried up to his elbow in order to massage her lungs.

This is the first episode that reaches an effective ending. It also, like the entire film fairly much, gives the impression of taking place in some twilight zone – where the hospital appears to have been abandoned for reasons that are never made clear and in the unsettlingly WTF segue into the next episode where the over-friendly 911 operator appears to be no more than a bar denizen in a phone box.

The sense of the entire film taking place in a twilight zone continues with Jailbreak from Dallas Hallam and Patrick Horvath who both co-directed Entrance (2012) and The Pact II (2014). The images become unsettling – a bar patron who is about to turn into some kind of creature; the barman who takes David Yow out to an ordinary building in the desert and points to a wall and insists it is a doorway; the tattoo of an eye on the barman’s hand that suddenly blinks. Once we enter into the building and break out with the sister, the episode leaves you wanting to know more about what is going on and the strange world that she says she is a part of, however the end comes before any of the questions are given answers.