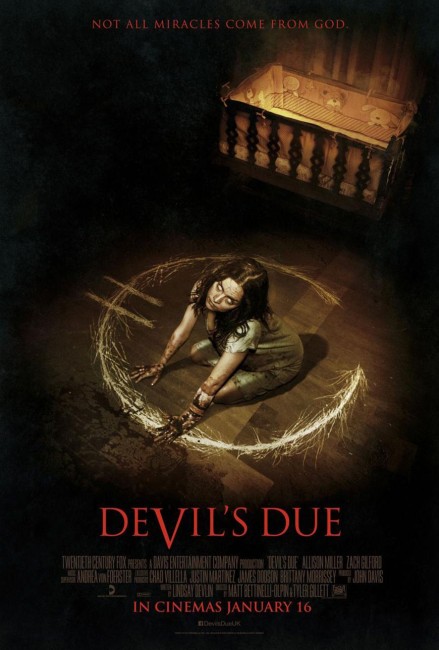 Zach and Samantha McCall get married and go on a honeymoon to the Dominican Republic. There a taxi driver takes them into an underground bar and they venture down below into the midst of a strange ritual ceremony. Returning back to the US, Samantha discovers that she is pregnant, despite having unfailingly taken the pill. They welcome the pregnancy but Sam soon starts to become increasingly ill and behaviourally disturbed. As Zach records everything with a camcorder, he becomes aware that a supernatural force is guarding the foetus inside Samantha and killing all who threaten it.

Devil’s Due arrives at a time when it feels like the Found Footage film has played itself out as a genre and the general feeling is one of ennui and there is little it has offer that is new. Some of the abovementioned Found Footage films have breathed new life into old themes through their use of the new format. Most, it becomes apparent, are simply filmmakers jumping aboard a trend and looking for new material to repackage. There’s the undeniable feeling of over-familiarity here. Among other things, this film never even concern itself with the pretence that what we are seeing is true anymore, while the need to keep changing to different camera points-of-view (which becomes particularly obvious when the filmmakers decide to add a twist ending) feels like a story that has been unnaturally squeezed to work as Found Footage.

Devil’s Due overhauls the Satanic impregnation film. This had previously been conducted in Found Footage with Delivery (2013), followed by The Devil Incarnate/Copiii: The 1st Entry (2013). The Satanic pregnancy film began with the huge success of Roman Polanski’s Rosemary’s Baby (1968). There were numerous variations on the basic theme throughout the 1970s and sporadically into the 80s and 90s before it died out (although Rosemary’s Baby did undergo a remake as the mini-series Rosemary’s Baby (2014) the same year as this came out).

It may well be that the Satanic impregnation genre is one that has even fewer creative variations than the Found Footage film – about the only variants we have seen on it are films where the child seems caught between devil and messiah as per works like The Seventh Sign (1988), Servants of Twilight (1991) and Bless the Child (2000). Devil’s Due offers neither any unique and different treatments of either the Found Footage or the Satanic impregnation film. You can predict almost all of its moves.

Devil’s Due comes from Matt Bettinelli-Olpin and Tyler Gillett, two of the four-person team that made up the collective Radio Silence who directed 10/31/98, one of the better episodes of V/H/S, and later went on to make another anthology Southbound (2015). (The other two members of Radio Silence, Juan Martinez and Chad Villela, also hold prominent positions on the credits).

Bettinelli-Olpin and Gillett create various frissons and occasionally effective jumps – Allison Miller’s abrupt attack on an SUV that nearly backs into her in a parking lot; her waking up in her sleep under infra-red camera light; seeing her (a vegetarian) tearing into and ravenously devouring a tray of raw meat in a supermarket; a priest having a seizure in the midst of a Confirmation service; doors blasted off their hinges. They feel like scenes that could have been pushed to something eerie and jolting but where both the familiarity of the Found Footage film and the Satanic impregnation genre waters them down so that the net effect is they wash over you without any real engagement.

The spookiest scene – where a group of kids with a camera come across Allison Miller devouring the corpse of a deer in the woods – also collapses into the silliest – when bodies start being dragged off and thrown up into the air (while still holding their cameras). Occasionally the film broods with some tension and sense of bad things about to happen but mostly it feels like it plays everything by formula.

Matt Bettinelli-Olpin and Tyler Gillett next went on to make the horror film Ready or Not (2019).