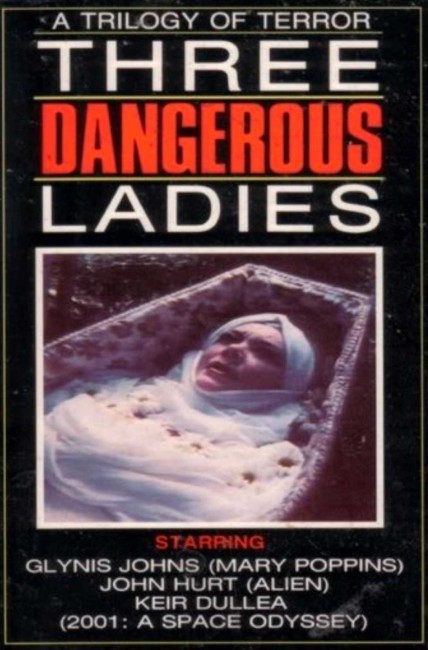 Mrs. Amworth:- Mrs Amworth is the sparkling social centre of a sleepy English village. As the villagers fall prey to a mysterious infection, some of the locals believe that Mrs Amworth may be a vampire and that she is really Elizabeth Maston, resurrected from the 17th Century. The Mannikin:- Following the death of her mother, pop singer Simone Maglore returns to the home where she grew up. She wants nothing more to do with Mrs Smith who raised her and now occupies the house. Her doctor recommends her to psychologist David Priestly to deal with her issues. Simone tells how she was raised amid occult rituals. David then becomes concerned when Simone goes back to the house and fails to return. The Island:- Lieutenant Simmonds returns from the war and goes out to an island to visit Mrs Santander but becomes wound up in the mysterious happenings in the house.

Three Dangerous Ladies gives all indication that it is another effort trying to join this fad. I say “would seem” because it is not actually a film but in fact episodes stitched together from a tv series. All three of the stories in the film were aired as part of a Canadian tv series Classics Dark and Dangerous (1977), which only ran for six episodes. In the 1980s, these were repackaged together as a feature film and released to video. More than that seems a little unclear.

The IMDB confuses the matter considerably by listing the film’s release date as 1977 and then each of the episodes separately as short films with various release dates in 1977 and 1978, which would mean that some of them were released after the film itself was. A user in the comments section says the film was packaged together and released in 1988 – I am unable to find any other information to verify this but will go with that for want of anything else that can clear up the morass of confusion. To further add to the confusion, some of the short films are listed as being Canadian and others British. If they all come from the same tv series, then it has made an effort to shoot in England and employ British actors.

I am probably expending more effort on Three Dangerous Ladies than it warrants. All of the episodes are dreary. It would have to be one of the dullest anthologies I have ever sat through. Even the ‘three dangerous ladies’ part of the title is a misnomer – we have one who is a vampire; another who is an innocent that is drawn into a cult; and a third who barely appears in an episode where I am not even sure what the heck was going on.

The first episode Mrs Amworth comes from Alvin Rakoff, a Canadian director who spent much time directing British tv plays during the 1960s and 70s. He ventured onto cinema screens sporadically with the adventure film King Solomon’s Treasure (1978) and the horror film Death Ship (1980). The episode feels as though it is a vampire tale made by a group of people who either haven’t or seem to think their audience hasn’t watched a vampire film before. The only sunny spot seems to be Glynis Johns , a British comedy start mostly known for Mary Poppins (1964), even if gives a performance where she seems under the impression she is the guest star a village fete rather than a vampiric predator.

The Mannikin comes from Don Thompson, a Canadian director/producer of no particular distinguishing note. Interestingly, this is based on a short story by Robert Bloch, the author of the original Psycho (1960) novel, who had also contributed to a number of the Amicus anthologies. This is probably the better of the episodes by default. There is a modest conviction given to the scenes with Ronee Blakely returning to her family home and then being drawn back in. There’s even a very weird effect where she seems to sprout a creature from her back. There is never an explanation of what the creature is or for that matter what the mannikin of the title refers to. The episode comes to an abrupt and silly halt at the end where Keir Dullea drives off and is attacked by a creature that leaps up from the backseat of his car.

The final episode The Island comes from Robert Fuest, a British director who emerged from tv’s The Avengers (1962-9) and made the original And Soon the Darkness (1970), the cult hit of The Abominable Dr Phibes (1971) and its sequel Dr Phibes Rises Again (1972), the dull adaption of Michael Moorcock’s psychedelic spy novel The Final Programme/The Last Days of Man on Earth (1974) and the Satanist drama The Devil’s Rain (1975).

I wish I had a clue what was going on in this episode. It certainly has some great star power with a young John Hurt as the soldier visiting the island, Graham Crowden as the butler, Charles Gray as the enigmatic husband and even Jenny Runacre as the woman being quested for. Fuest creates some reasonable atmosphere prowling around the castle but I failed to work out what happened at the end, what the mystery was and whether Jenny Runacre was dead or what.