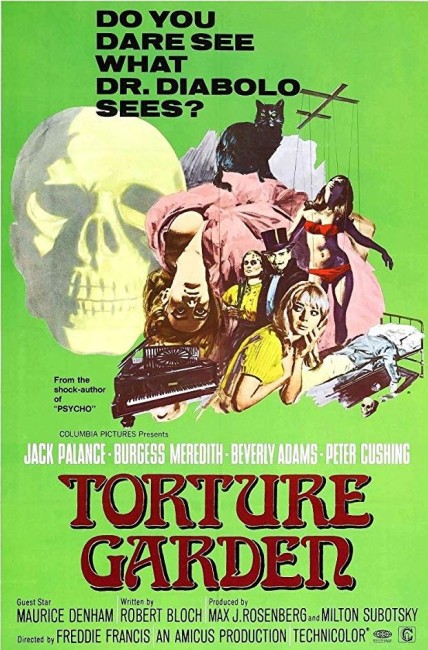 At a carnival exhibit, Dr Diablo takes five customers to a back room where he offers them glimpses of their futures. Enoch:- Colin Williams goes to stay with his uncle, determined to get hold of his fortune. He withholds his uncle’s medicine to force him to tell him where the money is but instead the uncle dies. Afterwards, Colin meets a cat Balthazar that talks to him and demands that he conduct other killings in return for which it will show him where the fortune is. Terror Over Hollywood:- Aspiring actress Carla Hayes determinedly pursues a part in a film. After being cast, she finds herself falling for her leading man, the enduring star Bruce Benton. She then finds the secret of movie stars youthful longevity – that they are being replaced by robot doubles. Mr Steinway:- Journalist Dorothy Endicott goes to interview the introverted concert pianist Leo. They become romantically involved but when she tries to draw Leo away from his beloved grand piano Utopie, it becomes jealous. The Man Who Collected Poe:- Ronald Wyatt, a dedicated Edgar Allan Poe collector, goes to visit Lancelot Canning, one of the foremost Poe collectors in the world. Getting drunk, Canning shows him his secret collection of unpublished Poe works. Wyatt then makes the shocking discovery that Canning has brought Poe back to life to write new stories.

Amicus Films had had great success with the portmanteau anthology Dr Terror’s House of Horrors (1965). They returned with Torture Garden, reuniting director Freddie Francis and star Peter Cushing. Burgess Meredith, in an appallingly fake-looking beard, is clearly cast in the same mold as Peter Cushing’s Dr Schreck in Dr Terror, as a sinister figure introducing the segments on the pretext of showing people their future.

On script, Amicus imported American horror author Robert Bloch who was then in the public eye as a result of Alfred Hitchcock’s wildly successful adaptation of his novel Psycho (1960). For Torture Garden, Robert Bloch adapted several of his own short stories published in the 1950s into a script. Bloch later went on to become a mainstay of Amicus, contributing to several other anthologies such as The House That Dripped Blood (1970) and Asylum (1972) and original films like The Skull (1965), The Psychopath (1966) and The Deadly Bees (1967).

Torture Garden is one of the lesser among Amicus’s mostly worthwhile anthologies. The first two stories are flat, Terror Over Hollywood being the especially weak link in the chain. However, the next two are sharp and original – compare them to Dr Terror‘s humdrum revamping of standard B-movie themes and it becomes clear just what Robert Bloch manages to bring to the party.

Freddie Francis brings his customary stylism and sharp pictorial contrasts between fore– and background. Memorable images abound such as Barbara Ewing being chased about the house by a grand piano. The Edgar Allan Poe segment works the best where Jack Palance and Peter Cushing are clearly enjoying themselves. The linking segment is slight.

One might also note that, despite the title, the film features no torture, nor any gardens. For that matter, despite the title Terror Over Hollywood, the segment is actually set in an English studio. Much better anthologies would emerge from Amicus – see Tales from the Crypt (1972), From Beyond the Grave (1974) and the aforementioned Bloch titles.