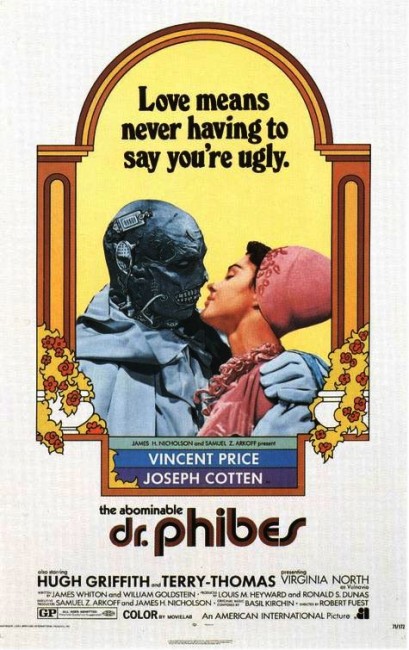 Police investigate a series of murders that appear to be patterned after the ten Biblical curses that Moses called down on Egypt. The victims, all doctors, have been killed with bats, bees, via draining of the blood and the like. The mastermind behind the killings is discovered to be organist Dr Anton Phibes, whose face has been left hideously scarred after an accident and he having to talk and eat through a tube at the neck. Phibes, along with his assistant Vulnavia, is now trying to seek revenge the death against the surgical team of twelve responsible for the death of his beloved wife Victoria on the operating table.

The Abominable Dr Phibes was made towards the tail-end of the Anglo-Horror cycle. Although English-made, it is actually bank-rolled by Roger Corman’s old-stomping ground American International Pictures, who churned out many low-budget films during the 1950s and 60s. It has an ornate wit that makes it like a Rolls-Royce among horror films. It also features what is possibly the best performance that Vincent Price ever gave.

The Abominable Dr Phibes is a camp masterpiece. It has a sublime elegance – what other film could offer up a scene where a man’s blood is drained to the accompaniment of a woman in furs standing outside playing a melancholic violin solo. There is such a droll sense of humour at work here – like the moment Vincent Price’s deformed title doctor pours a glass of champagne and then tips it up to his neck to drink, or puts a finger dipped in the vegetable juice to his neck to taste the flavour. There is the joyously droll moment where Maurice Kaufman is impaled against the wall on the horn of a unicorn head fired from a cannon, with the bumbling police then having to unscrew the body from the wall, while arguing over which way the thread of the horn’s screw runs.

Vincent Price gives the best performance of his life as a madman, seemingly trapped inside his own face, all the time delivering hilariously flowery eulogies to his dead wife via speaker-phone. There is that marvellously wicked little chuckle he gives, sitting sniffing a daisy as he watches one victim go down in a plane. He’s perfect. The scenes in the house as Price and the lovely never-speaking Virginia North sweep across the ballroom floor, amid painted Art Deco cycloramas and a clockwork orchestra have a beautiful, elegant sophistication. There is also a superb score.

Director Robert Fuest and Vincent Price made a sequel Dr Phibes Rises Again (1972), which is okay but misses much of this film’s elegance.

Robert Fuest came to The Abominable Dr Phibes via the camp antics of tv’s The Avengers (1962-9) – in fact Dr Phibes would have made a perfect foil for Steed and Mrs Peel. Fuest had previously made the tourist psycho-thriller And Soon the Darkness (1970) and an adaptation of Wuthering Heights (1970) starring a young Timothy Dalton. With The Abominable Dr Phibes, Fuest was briefly seen as horror’s leading light.

Subsequently however, Fuest petered out with the dull adaption of Michael Moorcock’s psychedelic spy novel The Final Programme/The Last Days of Man on Earth (1974), sank with the terrible Satanist drama The Devil’s Rain (1975), made an episode of the horror anthology Three Dangerous Ladies (1988?), before eventually being relegated to such dreadful tv movie fare as Revenge of the Stepford Wives (1980). Sadly, The Abominable Dr Phibes was a single peak that Fuest would never regain. He retired as a director in the mid-1980s and became a lecturer at the London International Film School before his death in 2012.

The success of The Abominable Dr Phibes briefly resulted in Vincent Price being cast in a series of horror films as a camp villain – as a mad Shakespearean actor in Theater of Blood (1973) and a demented horror actor in Madhouse/The Revenge of Dr Death (1974).