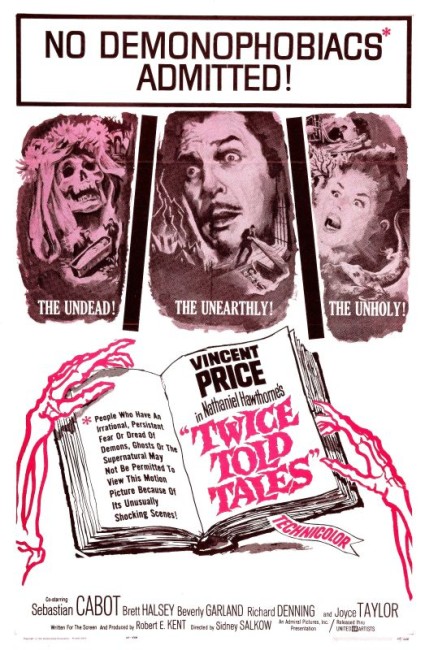 Dr. Heidegger’s Experiment:- Two septuagenarian friends, Dr Carl Heidegger and Alex Medbourne, come together to commiserate the anniversary of Heidegger’s fiancée Sylvia’s death, after she collapsed on the eve of their wedding. Heidegger has spent the ensuing 38 years unmarried. A storm blows the entrance to Sylvia’s crypt open and they are startled to find her body preserved, looking just the same as when she died. Heidegger realizes that the water dripping onto the coffin contains a heretofore unknown mix of elements that has stopped her aging. He distils the water and they take turns drinking it and instantly regain their youth. Heidegger then has the idea that the water can be used to bring Sylvia back from the dead. Rappaccini’s Daughter:- While visiting Padua, young student Giovanni Guasconti becomes captivated with a beautiful woman he sees across the courtyard from his window. He finds that she is Beatrice, the daughter of the eminent scientist Giacomo Rappaccini. However, she shuns all meeting with him and will allow none into the courtyard. He fights his way to see her – only to find that her father, desiring to protect her from sin, has injected her with plant toxins that make her deadly to all who touch her. The House of the Seven Gables:- Gerald Pyncheon returns to his family home, along with his new bride Alice. Ignoring warnings of the family curse, he determines to find the treasure that is reputedly buried in a vault somewhere in the house. Alice is haunted by visions of the past and comes to learn how 150 years before Pyncheon’s ancestor convicted an innocent man of witchcraft so that he could commandeer his property to build the house and how all Pyncheon men have been cursed to die since.

Nathaniel Hawthorne (1804-64) is probably known to most through high school English Lit class and for having written the classic novel of 19th Century American literature The Scarlet Letter (1850). His other best known work is the novel The House of the Seven Gables (1851), a Gothic retribution story. Less well known is Hawthorne’s substantial output as a horror writer. Hawthorne delivered well-known works of the fantastique such as Young Goodman Brown (1835) and Feathertop (1852), both of which have been multiply filmed (although none of the versions have a particularly high profile). Hawthorne to all accounts led a very unhappy life, in Salem, Massachusetts, living in solitude and enjoying little success as a writer within his lifetime.

Twice-Told Tales takes its title from Hawthorne’s 1837 short story collection of the same name. The film clearly came about as a result of the success that Roger Corman had with his series of Edgar Allan Poe adaptations, beginning with The House of Usher (1960). The filmmakers turn to another writer of American Gothic and set the film in the same type of florid period surroundings that Corman did. More to the point, the filmmakers employ Vincent Price, the mainstay from Corman’s Poe films, as the single connecting feature in all three stories. Even more so, the filmmakers have taken a clear leaf from what Corman did with the Poe portmanteau Tales of Terror (1962) a year earlier in telling three horror stories from the same author in one film – indeed, in both Twice-Told Tales and Tales of Terror, Vincent Price is the single connecting actor in all three of the stories that either film tells.

Alas, Twice-Told Tales is a ponderous bore. The stories are adapted in literalistic ways. Most notably, Dr Heidegger’s Experiment (1837) is bent entirely out of shape. In the original story, the titular medic offers an elixir to three aging men and one woman who have all led selfish lives – they regain their youth but end up squabbling over the woman, before finding the effects of the elixir are only akin to a glass of wine. There is mention of the doctor’s late wife who drank poison but she is not resurrected from the dead, nor do we visit her tomb. The elixir in the story is not derived from water that mysteriously drips down onto a coffin but has been sent to the doctor by someone who found Ponce de Leon’s Fountain of Youth.

Hawthorne’s story is a morality tale about greed and selfishness but in the film it has been turned into a Poe-esque tale about a wife revived from the dead. The twist in the original tale is present here but is overshadowed by another modestly effective twist that reveals Vincent Price’s companion was the wife’s secret lover and that it was he that poisoned her.

The second episode, the adaptation of Rappaccini’s Daughter (1844), is the best of the segments and not too surprisingly is also the most faithful to the original story. Little of the essence and thrust of the story is changed and the episode holds one to it, despite the ponderousness of Sidney Salkow’s direction, due to the intriguing mystery built up around the girl in the courtyard and the twists that Hawthorne puts on the story, which are all preserved intact.

That, alas, leaves the third and final segment, which makes a vain attempt to reduce Nathaniel Hawthorne’s The House of Seven Gables, a novel of 21 chapters, to a segment of around 40 minutes. In fact, the film fairly much abandons all of Hawthorne’s novel and constructs a new story (a standard haunted house story) out of a handful of elements from the book – the wrongly condemned ancestor, the quest for a map, the seemingly cursed deaths of the Pyncheons. Most of the characters present in this episode have no equivalent in the book, for instance. Moreover, while Hawthorne is ambiguous about the supernatural in the book – the book has been aptly called “a ghost story without any ghosts” – the film has no qualms about such and ends with the schlocky image of Vincent Price being killed as a ghostly skeletal hand reaches out from a wall safe and closes around his throat.

Twice-Told Tales is dull and ponderous. The stories in themselves, even the mangled adaptation that they are, could have worked well with a different director. Alas, the film is hamstrung with the dreadfully pedestrian Sidney Salkow who also directed Price in The Last Man on Earth (1964), another thoroughly dull adaptation of a fine horror story. Salkow’s sedentary direction and Technicolor colour wrings all the atmosphere out of the stories. What the film needed was the vigour and brio that Corman brought to his various Poe films, or even the flair of someone like Terence Fisher who was having similar success across the channel at Hammer Films.