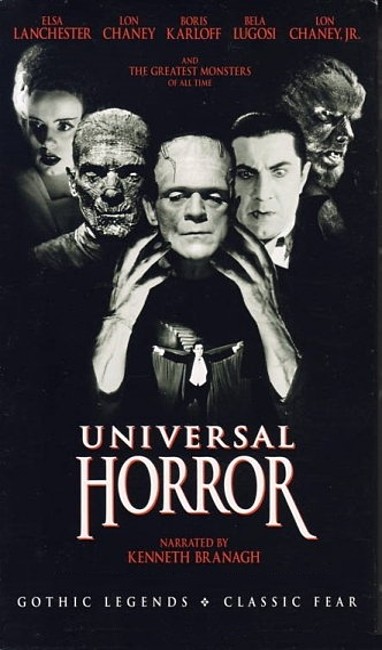 Universal Horror is a documentary about the era of classic monster movies that were made at Universal Studios during the 1930s. This era is generally agreed upon as beginning with the Bela Lugosi Dracula (1931) and the Boris Karloff Frankenstein (1931), although the documentary traces the beginnings to much earlier with the Lon Chaney [Sr] versions of The Hunchback of Notre Dame (1923) and The Phantom of the Opera (1925), as well as the Old Dark House classic The Cat and the Canary (1927). The documentary charts in depth the classics that came out at Universal under Carl Laemmle Jr during this era, covering the likes of Murders in the Rue Morgue (1932), The Old Dark House (1932), The Mummy (1932), The Invisible Man (1933), The Black Cat (1934), Bride of Frankenstein (1935), Dracula’s Daughter (1936) and Son of Frankenstein (1939).

One does feel that the title is somewhat of a misnomer. While the film tells a history of Universal Studios during this era and discusses the Laemmle family in detail, it also moves out beyond the mandate of strictly Universal horrors to discuss works from other studios such as MGM’s The Unknown (1927), Paramount’s Dr. Jekyll and Mr. Hyde (1931) and The Island of Lost Souls (1932), RKO’s King Kong (1933) and Warner Brothers’ Mystery of the Wax Museum (1933) and even personalities who never made any Universal horrors such as Fritz Lang and Kong co-director Merian C. Cooper. One sneakingly suspects that the real title of the documentary should more accurately have been something like The Golden Age of Horror.

Nevertheless, one cannot fault director Kevin Brownlow’s impeccable grasp of the subject matter. He screens footage from some fascinatingly obscure films – the King Baggott Dr. Jekyll and Mr. Hyde (1913), The Cat Creeps (1930) and Paul Leni’s The Last Warning (1929). Profiles are offered of the major personalities of the era – Boris Karloff, Bela Lugosi, Lon Chaney, Carl Laemmle, James Whale, Tod Browning, makeup artist Jack Pierce and some of the lesser-known players like directors Edgar G. Ulmer and Paul Leni. Brownlow delights in fannish trivia – arguing in a point-for-point comparison of the superiority of the Spanish language Dracula (1931) over the Lugosi version; the tracing of the influences of The Golem (1920) and even F.W. Murnau’s Sunrise: A Song of Two Humans (1927) on the Karloff Frankenstein. Brownlow manages to draw out some fascinatingly obscure facts – that in The Phantom of the Opera the designs of the Paris Opera House were directly based on the recall of one designer who had intimate knowledge of the real Opera House; or how the Spanish language Dracula came about because Lupita Tovar was dating Universal production head Paul Kohner and he desired to create a vehicle for her.

David J. Skal, author of Dark Carnival: The Secret World of Tod Browning (1982) and Hollywood Gothic: The Tangled Web of Dracula from Novel to Screen (1990), is present (and listed as ‘Historical Consultant’ on the credits). He offers up some interesting theories (although not ones that I am sure if I entirely agree with) – that the popularity of Lon Chaney’s grotesqueries during the silent era was an audience reaction to World War I where many servicemen returned from the trenches disfigured. This argument is debatable – it does not explain the popularity of Lon Chaney’s films in America, which was relatively unscathed by the horrors of World War I, as opposed to Britain and Europe. The argument also gets stretched when Skal tries to make analogy between mad scientist cinema and Dr Josef Mengele and the Nazi death camps, which were not established until 1940 when the period of Universal horror that the documentary covers was almost over. The argument is also strained where Skal draws the analogy to the horrors of World War I out by calling Abel Gance’s J’Accuse (1937) a literalisation of Universal’s obsession with the grotesque – while that is certainly what the film was about, Gance was in France half a world away from Universal and not making genre horror but a work in the surrealist tradition.

The documentary ends with The Wolf Man (1941). Lon Chaney Jr’s Wolf Man was the last of the classic Famous Monsters to emerge and this is largely seen as the end of the Golden Age of Horror by many fans. One feels that Kevin Brownlow ended the documentary more with his real desire of focus – the Golden Age of Horror – rather than the title’s stated target – the Universal Studios horror story. What is not given mention is how Universal continued to make horror films throughout the 1940s. There were a good many Mummy and Invisible Man sequels, not to mention the famous monster team-ups beginning with Frankenstein Meets the Wolf Man (1943) and culminating in Abbott and Costello Meet Frankenstein (1948), as well as original works like Weird Woman (1944) and the Jungle Woman series beginning with Captive Wild Woman (1943). Certainly, none of these were classics and all were made on much cheaper budgets than their predecessors but Brownlow leaves them unmentioned. The documentary does touch upon some of the reasons for these – the Laemmles going bankrupt in the mid-1930s and the studio being taken over by creditors who had no understanding of the horror cycle until they needed money and decided to start making monster sequels. One would have liked to have seen Kevin Brownlow extend the documentary throughout the war years as this period, even though it represents the studio’s decline as a producer of horror, is an equally important part of the story.

One regret about the film, while it is impeccably researched, is how few of the original players are left around for it to interview. In making the documentary some sixty years after the Golden Age passed, there are not that many of the talents that were present at the time still left alive. Brownlow manages to find a handful of actors and actresses who had minor parts in some of the Universal horrors – Turhan Bey, Gloria Jean, Gloria Stuart, Lupita Tovar – and merely a couple of people who had major roles – Fay Wray and The Wolf Man screenwriter Curt Siodmak. All the rest – certainly all those profiled – are sadly now dead. The rest of the time Kevin Brownlow is left interviewing children of the principal players – Carla Laemmle, Sara Karloff, Arianne Ulmer – or people that offer their childhood recall of the films such as Famous Monsters of Filmland (1958-82) editor Forrest J. Ackerman, genre writer Ray Bradbury and actor James Karen, who are now septuagenarians and, in Ackerman’s case, octogenarian.