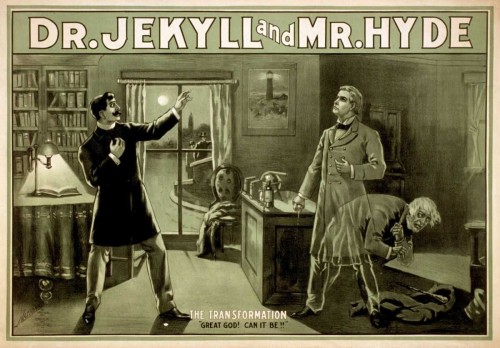 The respected doctor Henry Jekyll experiments with a potion that allows him to bring out the dark side of human nature. Taking the potion, he transforms into a hideous and stunted figure he calls Mr Hyde. Hyde takes a room of his own and conducts acts of mayhem, including murder. However, Dr Jekyll then finds that the transformations are becoming uncontrollable.

This was the fourth film adaptation of Robert Louis Stevenson’s classic novel The Strange Case of Dr Jekyll and Mr Hyde (1888). The story was filmed seven times during the silent era alone and many times since then. (See below for a list of the other adaptations).

With this being only the fourth film version of the novel, much of the story would have been fresh back in 1913. It would have been very different for audiences of the 1910s watching the film than it is for me over a century later after seeing umpteen other versions and probably having too much of an over-familiarity with the story. For me, at least, this version reads as okay if unremarkable. But that is me as a product of the latter half of the 20th Century. I cannot say what it would have been like for 1913’s audiences watching the film.

The surprise is how faithful this version is to the Robert Louis Stevenson story – and moreover that it manages to get through the whole plot and introduce all the players within its 26 minute runtime. Being fairly much confined to what he could do with the cameras of the day, director Herbert Brenon films the entire show in a series of static shots as though it were a play. Brenon does evince a certain atmosphere with shots looking through the window of a pub as Hyde peers in. But you also have to remember that this was around the time D.W. Griffith was gaining force and a few years before the arrival of Fritz Lang and F.W. Murnau, not to mention was over a decade after Georges Melies was doing extraordinary things with only single camera set-up scenes, and the dullness of the drama cannot help but read as disappointing.

King Baggot was a very popular actor of the silent era – in fact, he is claimedly the first actor to ever be given billing in a silent film. He played in 340 films between 1909 and his death in 1948, as well as directed 45 of them, although his star started to fade with the coming of the sound era. As Dr Jekyll, he never gives anything more than a melodramatic stage performance. The transformation sequence – always a key big effect in any version – disappointingly takes place in three crude lap dissolves. The strangest sight is Baggot’s version of Mr Hyde – a hideous and gnarled figure in a floppy felt hat where Baggot plays the entire performance squatted down as though he were walking on his knees.

Other variations include the would-be sequels Son of Dr Jekyll (1951), Daughter of Dr Jekyll (1957) and Dr Jekyll and the Wolfman (1972); the comedy variations Abbott and Costello Meet Dr Jekyll and Mr Hyde (1953), The Ugly Duckling (1959), the Italian My Friend, Dr Jekyll (1960) and The Nutty Professor (1963) with Jerry Lewis and its remake The Nutty Professor (1996) with Eddie Murphy; versions where Dr Jekyll turns into a woman with Hammer’s Dr Jekyll and Sister Hyde (1971), the Italian comedy Dr Jekyll and the Gentle Lady (1971) and Dr Jekyll and Ms Hyde (1995); the gender-reversed Madame Hyde (2017); the gender-reversed Madame Hyde (2017); a Looney Tunes cartoon Dr Jekyll’s Hide (1954) where Sylvester the Cat transforms into a dog after taking the formula; the erotic/adult versions The Naughty Dr. Jekyll (1973), The Erotic Dr Jekyll (1976), Jekyll and Hyde (2000), Dr. Jekyll & Mistress Hyde (2003) and Jacqueline Hyde (2005); Dr Black and Mr Hyde (1976), a Blaxploitation version where Jekyll is a Black man who turns into a white-skinned monster; the amusing send-up Jekyll and Hyde … Together Again (1982); a wacky children’s tv series Julia Jekyll and Harriet Hyde (1995); Killer Bash (1996) set in a frat house with an avenging female Jekyll; the excellent deconstruction Mary Reilly (1996), which tells the story from the point-of-view of Jekyll’s maid; while the tv series Jekyll and Hyde (2015) concerns Jekyll’s grandson (Tom Bateman) hunted by various parties during the 1930s. Dr Jekyll appears as a character in The League of Extraordinary Gentlemen (2003) played by Jason Flemyng, in the tv series Penny Dreadful (2014-6) played by Shazad Latif and in The Mummy (2017) played by Russell Crowe, which all feature team-ups between Famous Monsters, while the animated The Pagemaster (1994) features a Dr Jekyll voiced by Leonard Nimoy.