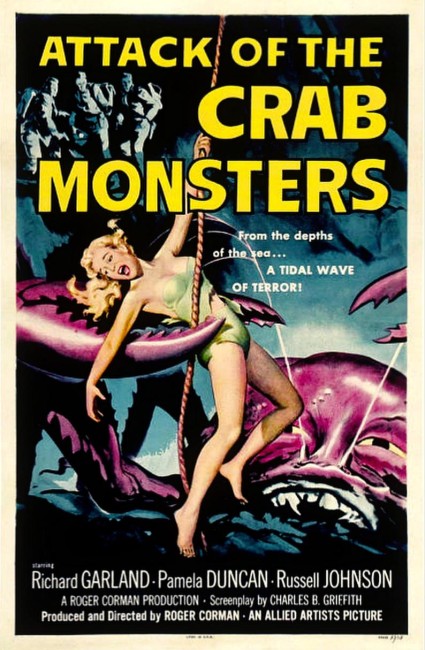 A group of scientists arrive on a small remote Pacific coral island to investigate what happened to a previous expedition whose members have all gone missing. However, their plane explodes moments after taking off, stranding them on the island. There are mysterious happenings, including earth tremors that cause sections of the island to subside and attacks made on their equipment. Members of their expedition go missing and then their voices, along with those of people from the previous expedition, can be heard calling. They discover that they are dealing with crabs that have been grown to giant size by atomic radiation. The crabs have also become intelligent and developed the ability to absorb the minds of those they devour into their gestalt.

Director/producer Roger Corman earned the nickname ‘The King of the B Movies’ and a reputation as someone who would cut every corner he could to save a dollar. Corman’s exploits in this regard are legendary. He is the director who could finish a film so quickly he could make another entire film out of the leftover days on an actor’s contract, or after finding a set that hadn’t yet been demolished would have a script speedily written and make a film around it. Not to mention could take two Russian science-fiction films and rehash the best footage to make no less than four other English-language films.

Corman began in the 1950s, directing mostly very cheap science-fiction, monster and teenage delinquency films at AIP (American International Pictures). These include the genre likes of Day the World Ended (1955), It Conquered the World (1956), Not Of This Earth (1957), The Saga of the Viking Women and Their Voyage to the Waters of the Great Sea Serpent (1957), Teenage Caveman (1958), War of the Satellites (1958) and The Wasp Woman (1959).

Corman started to turn the B movie into something else after his collaborations with screenwriter Charles B. Griffith. Together they made Attack of the Crab Monsters, The Undead (1957) and then started to plant tongues in cheek with A Bucket of Blood (1959), reaching their heights with Corman’s low-budget gem The Little Shop of Horrors (1960), before it all started to get a bit silly by the time of Creature from the Haunted Sea (1961). In the decade ahead, Corman made a series of Edgar Allan Poe films that earned him a reasonable degree of critical acclaim. He retired from directing in 1970 and thereafter became a producer, turning out a huge number of low-budget films at various companies like New World Pictures and Concorde-New Horizons. (See bottom of the page for Roger Corman’s other genre films).

Attack of the Crab Monsters was one of Roger Corman’s typical B monster movies from this period. The title and bald synopsis gives the impression that Corman and Charles B. Griffith are not taking the film too seriously but for the most part they play the show with far more of a straight-face than it probably warrants. The film is expectedly made on the cheap, although Corman did apparently find enough money to shoot several scenes with the cast scuba diving.

The crab monsters are widely ridiculed for being ones where you can frequently see the wheels beneath the mock-up, although to be fair they work reasonably well as the menace of the show and are not too cheesily absurd. Corman does takes his time unveiling them – it is 40 minutes into the film’s slender 62-minute running time before we even see a pincer, for instance, and 44 minutes before we see an actual crab monster.

On the minus side, Corman’s direction is largely pedestrian. This is not one of his films such as It Conquered the World where he enlivens the material, nor one where the quirkiness of the script carries proceedings as in A Bucket of Blood and The Little Shop of Horrors. There is surprisingly little of Charles B. Griffith’s tongue-in-cheek dialogue or even the pulp poetry of earlier Corman films like Day the World Ended or It Conquered the World. There is the odd moment of classic B-movie dialogue – the priceless “Once they were men, now they are land crabs.” Certainly, some of the ideas that Griffith’s script tosses up – that the radiation has reduced the monsters to a form that is in chemical flux, that they absorb the minds of others into their mass – have a way-out entertainment value.

It is not long in before the film begins to relate the monster of the piece to atomic testing, placing Attack of the Crab Monsters amid the fad for atomic monsters that was started by The Beast from 20,000 Fathoms (1953) and Them! (1954). This is conflated in the opening moments by a narrator’s portentous voice quoting Biblical lines about saying that God will destroy the earth. One of the interesting narrative devices that Corman uses is the opening title card that starts in in second person, directly referring to the audience as the members of the expedition.

One of the great surprises is that Roger Corman has never remade or recycled the title of Attack of the Crab Monsters before now as he has with almost all of his other films from this era.