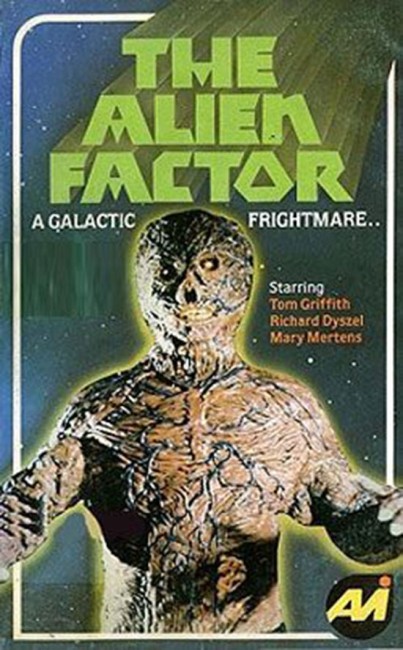 The small town of Perry Hall, Maryland, is struck by a series of killings. These are taken to be caused by a wild animal. An investigating astronomer finds an alien spaceship and discovers that the killings are being conducted by three escaped alien zoo animals.

The Alien Factor is a low-budget film, regionally (Baltimore) made by Donald Dohler. Dohler is perhaps better known to some as editor of Cinemagic magazine in the late 1970s/early 1980s, which for awhile was the magazine for all amateur filmmakers wanting to learn how to achieve professional effects on shoestring budgets.

The same sense of fannish enthusiasm infuses The Alien Factor, even if it is not a very good film. It has been unfairly read as a very bad film in some places – which is not the case at all. It has an interestingly original central idea – the rampaging monsters are escaped animals from an alien zoo ship – and an effective twist ending. One suspects that if the basic film could have been made by a company of the era like AIP or New World on B-budget resources and with a better director that it could have emerged as a worthwhile minor B effort.

Unfortunately, Donald Dohler is hampered by a lack of budget and resources. The actors are all amateurs – although none give truly bad performances. The photography is poor – the film is very dim and hard to see – and there is a tinny synthesizer soundtrack that sounds like it has been recorded on a pocket tape recorder. Dohler is not that good a director either – even with the film’s lack of resources, he could have milked many of the scenes for far more suspense and atmosphere than he does, but instead maintains a detached disinterest.

Nevertheless, when it comes to what is clearly Dohler’s forte – conducting professional effects on a zero budget – The Alien Factor displays far more enterprising virtue than many better-budgeted films. There is some weak stop-motion effects at the climax but some imagination has been placed into making the other creatures look non-human – a furred creature that walks on three-toed stilts is particularly striking. The alien ship is convincing and there is a particularly good vision of Earth seen from space at the start of the film.

Donald Dohler went on to make the other low-budget genre likes of Fiend (1980), Nightbeast (1983), The Galaxy Invader (1985) and Blood Massacre (1991). Dohler came out of retirement to make Alien Factor 2: Alien Rampage (2000), which, although billed as a sequel, is otherwise unrelated to this film. In more recent years Dohler formed Timewarp Films and took to writing/producing video-released horror films for other directors, which have included Harvesters (2001), Stakes (2002), Crawler (2004) and Vampire Sisters (2004), as well as he co-directing Dead Hunt (2007). Dohler died in 2006, ironically in the same town (Perry Hall) that features in the film here.