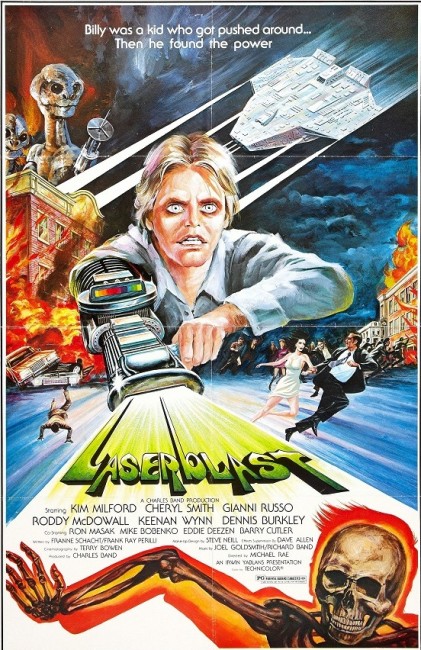 Laserblast was one of the first films from producer Charles Band, who has since become an extremely prolific producer of low-budget genre films in the 1980s and 1990s, heading studios like Empire, Full Moon Productions, Moonbeam and Pulsepounders. Before the establishment of Empire in the mid-1980s, Band was an independent producer, making various cheap genre productions such as Mansion of the Doomed (1976), the comic softcore Cinderella (1977), End of the World (1977), Tourist Trap (1979), The Day Time Ended (1980), and directing the likes of the killer car film Crash (1977), The Alchemist (1983), Parasite (1982) and Metalstorm: The Destruction of Jared-Syn (1983).

Laserblast was one of the quickest film to come out exploiting the massive success of Star Wars (1977). Surprisingly, it received a number of positive reviews among the new fan publications that also popped up at the time, with most citing it on the grounds of the stop-motion animated aliens of subsequently regular Band effects man David Allen that appear in the first few minutes and the model alien ship designed by Greg Jein who had worked on the same year’s more high profile Close Encounters of the Third Kind (1977).

Laserblast is a teen underdog empowerment fantasy. In actuality, it has more in kinship with the recent hit of Carrie (1976) than it does the intergalactic space opera of Star Wars. It is an incredibly badly made film on almost all counts. It is flatly shot and abysmally directed and looks like nothing more than a home-movie on the big screen.

None of the cast appear to resemble teenagers – both Kim Milford and bully Mike Bobenko look to be at least twenty-five with their prominent sideburns. There are some incredibly bad performances – from Kim Milford and bullies Mike Bobenko and Eddie Deezen, while the mugging of two stoned, overweight deputies played by Dennis Burkley and Barry Cutler is fascinating to watch in a ghastly way. Seasoned veterans like Roddy McDowall and Keenan Wynn are employed for name value but squandered in wafer-thin roles, with McDowall being killed after only two scenes.

Despite being celebrated for its effects, these are terrible. The model alien ship is good, but the stop-motion animated aliens are jerky and ineffective. The alien makeup on Kim Milford is highly unconvincing – it ends at the neck and is sometimes there, sometimes not, as though the filmmakers simply forgot to apply it that day.

There is a certain amusement that can be gained at the film’s venting sarcastic spleen in the direction of the success of Star Wars and clearly resentment at the fact that they are stuck down the low-budget end of the scale – Kim Milford is called a weirdo for having seen Star Wars five times and later the film indulges in a wish-fulfilment of blowing a Star Wars billboard to smithereens.

Charles Band later directed a sequel Laserblast II (1985), which is very obscure, so much so that one has yet to find a review from anybody who has actually seen it.