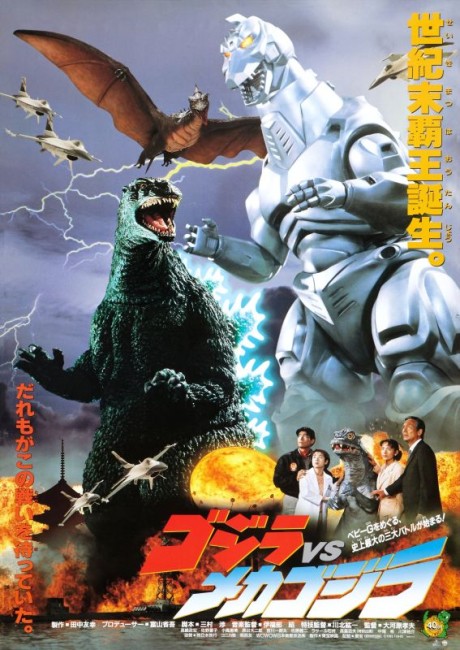 aka Godzilla Vs Mechagodzila III

In 1999, Godzilla reappears after 45 years and attacks Japan. During the attack, Megalosaurus Defence Force soldier Akane Yashiro is in a vehicle that is sent down an embankment and is the only survivor after all her comrades are killed. She takes this badly. Three years later, Dr Tokomitsu Yuhara, an expert in creating robots built out of animal DNA, is recruited as part of a scientific group set up to form a defence against further attacks by Godzilla. They have salvaged the bones of the Godzilla that was killed in 1954 and Dr Yuhara is given the job of building these into a robot to fight back against the new Godzilla. His creation is unveiled as Kiryu, which is nicknamed Mechagodzilla. Akane is chosen as its pilot. She and Yuhara form an attachment after she is rebuffed by her comrades over the deaths of her fellow soldiers. As Godzilla emerges again, Mechagodzilla is placed into action. However, in being made of the same DNA as Godzilla, it is found to have a will of its own that overrides commands.

Godzilla Against Mechagodzilla is yet another of the modern (post-1985) Godzilla films that returns to Godzilla as an aggressor. (Modern Godzilla films seem to want to avoid playing Godzilla as something cutsie but seem undecided as to whether it is hero or villain). To do this Godzilla Against Mechagodzilla, like many of the other modern Godzilla films, has to pretend that nothing has happened in terms of continuity between it and the original Godzilla, King of the Monsters (1954) nearly fifty years before. Though the Godzilla rampaging across the countryside would appear to be a different Godzilla (whose existence is never explained), the Mechagodzilla here is built up out of the bones and DNA of the original Godzilla that was destroyed in 1954. We do get some clips from the original film, as well as references to other classic Japanese monster movies, including the screening of footage from Mothra (1962) and War of the Gargantuas (1966).

There is a fine opening introduction of Godzilla, it seen rising up out of the ocean behind a tv reporter in the foreground, rampaging through the docks and then seen in a wonderfully primal image howling against the sky in the midst of a rainstorm. On the other hand, the film slows down after the opening. The effects sequences are fine but the complaint you could make is that they are very sparingly used throughout the first hour. There is much focus on military training and hi-tech weaponry and fighter planes being wheeled into action – the hi-tech attack force theme has come to the fore in some of the modern Godzilla films, which now tend to resemble something like Thunderbirds (1965-6). There is also the inevitable cute kid (Kara Onodera) added to the mix – very much a feature of the late 60s Godzilla films and especially their rivals the Gamera series. Far more than any Godzilla film one can think of, more time during the first hour is given over to characterisation – the wisely kid missing her mother; the female fighter pilot (Yumiko Shaku) haunted by past failures and trying to prove herself to hostile comrades; and the father (Shin Takuma) awkwardly attracted to the girl pilot.

Nevertheless, when the film finally gets its act together, it delivers all the goods we expect of a Godzilla film. There are some fine scenes with Godzilla emerging from the bay and blasting down the tanks and planes arrayed against him with his radioactive breath. The showdown between Godzilla and Mechagodzilla is eventually worthwhile – from Mechagodzilla’s first appearance, jumping in to side bodyslam Godzilla just as it preparing to incinerate a nurse and patient escaping from a hospital. There is a kick ass battle between the two with Mechagodzilla firing rockets from its backpack and using an energy sword; Godzilla fighting back and biting off the attachments; Mechagodzilla flying off in great leaps; Godzilla bodyslamming it through entire buildings and so on. It’s a fairly good battle as these films goes – even if the end reached is eventually one of dramatically unsatisfying irresolution.